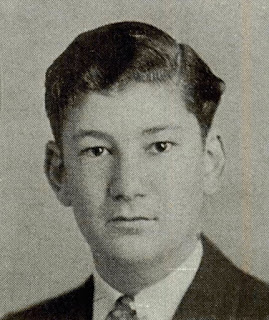 
Alvin Lester “Al” Stahl was born on July 3, 1916, in Yonkers, New York, according to his Social Security application that was transcribed at Ancestry.com. His parents were Jessie Stahl and Helen Mandell.

In the 1920 U. S. Federal Census, Stahl and his parents resided in the Bronx, New York at 933 Tiffany Street. The trio were in the household of Jacob Lory who was the uncle of Stahl’s father, a real estate broker. Lory was married with three children.

Stahl, his parents and brother, Irwin, lived in Atlantic City, New Jersey at 364 South Virginia Avenue in the 1930 census. Stahl’s father was a furniture merchant. 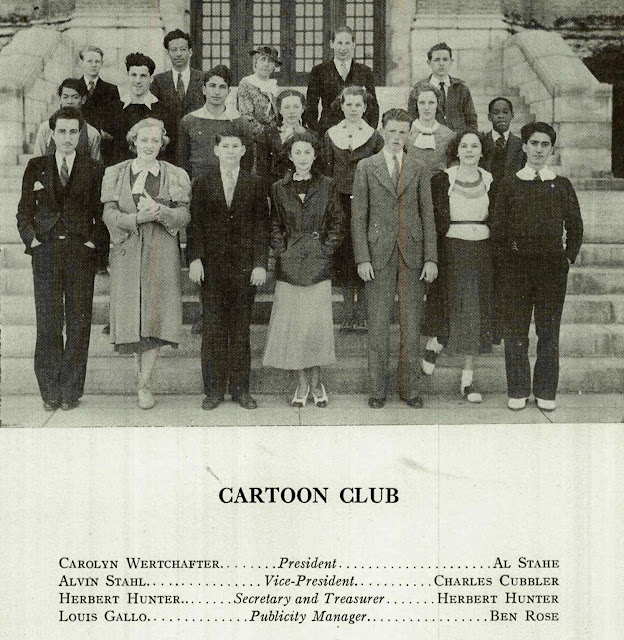 Stahl is in the front row, third from the left.

Information about Stahl’s art training has not been found. In 1934, Stahl wrote and illustrated the 68-page book, The American Course of Cartooning for the American School of Cartooning. that was based in Chicago, Illinois. The book was advertised in many publications including Popular Mechanics.

Who’s Who of American of Comic Books 1928–1999 said Stahl was an animator at Terrytoons and Famous Studios in the 1930s. At some point Stahl worked at the Fleischer animation studio. In Alter Ego #12, January 2002, Gill Fox said he met Stahl at Fleischer’s which was located at 1600 Broadway. Near the end of 1938, the studio moved to Florida.

The 1940 census said Stahl was a commercial artist residing at 103 West 91 Street. It’s not clear why Stahl told the enumerator he was born in Switzerland.

During World War II, Stahl enlisted in the army on September 4, 1943. Fox recalled how Stahl shorten his army service.


…World War II started, and because he was classified 1-A, Al knew he was going to get called into service. He didn’t want to go. I was still editor at this point, and six months after he left, Al walked into the office. I said, “I thought you were still in the service.”

He said, “I was, but I got out. I figured it out. Because of my background, they put me in the Signal Corps. You have to climb poles. So I got to the top of the pole and yelled out, ‘I can’t move! I’m afraid! I can’t move! I can’t come down!” They had to go up and take him down.

“It worked!” It was typical Al. He was a helluva cartoonist. And he’s still working! He’s kind of nuts and a lot of fun. A great cartoonist who knows how to make a buck. Anything he does is good. And he wrote his own stuff.

On January 29, 1944, Stahl obtained a marriage license in Manhattan, New York City. The name of the bride is not known.

During the 1940s Stahl worked for several comic book publishers. Who’s Who said Stahl used the pen name Bruce Baker on stories that appeared in Ding Dong and Frisky Fables. There was a comic book artist with that name according to the Utica Daily Press (New York), April 3, 1946. The newspaper identified some of the contributors to the Rhoads General Hospital publication, Mohawk Rhoadsman: “Among the reporters, photographers and artists who worked for The Mohawk Rhoadsman were: …T 5 Bruce Baker, comic book artist…” There were at least nine comic book stories signed “Bruce Baker”. It’s not clear what role Stahl had in those stories.

In the 1950s Stahl left comics and turned to animation. Business Screen Magazine, March-April 1951, published a list of regional film companies. Stahl was in charge of animation at American Film Producers, located at 1600 Broadway. In 1952 Stahl and his brother, Irwin, headed up Animated Productions, Inc., also at the same address. Stahl was in animation for over 35 years.

Stahl passed away December 10, 1999, in New York. He was laid to rest at Calverton National Cemetery.

Comments:
He looks half-Asian. Was that mentioned nowhere in the records? I think things like that should be honoured.
— Katherine (half-Arabic)

For many years throughout the 1970s and 1980s, Al took out small ads in film trade publications, notably Business Screen, that read; "Al Stahl Animates Everything". The ads promoted his free lance animation business.

Al was my grandfather. He was not half asian or anything, he was a German Jew... If his grand parents were from Austria I haven't really heard abut it. I think that maybe one of his grandparents was from Austria, but the records I've managed to scrounge up are a bit contradictory.

Here's a funny story my dad told me: Al went to New York to pursue a career as a cartoonist. When he finally found a place that was hiring, there was a gigantic line in front of the place, (I think it might have been Terrytoons) as it was during the Great Depression, and he didn't want to wait. Instead, he snuck in through a back window and started drawing on the first sheet of paper he could find. When someone finally came down and saw him, they said, 'who are you and what are you doing?!' and Al said that he was there for the job. The guy looked over his drawings and told him that it was very good, but they already hired a guy. However, if Al wanted, they would have him work for free and give him the next job that came up. So he accepted, and after a couple weeks of working for free he got hired.

Can anyone confirm the rumour that Al produced the opening animation sequence for The Phil Silvers Show aka Sgt Bilko, 1955? Many thanks.
Steve
The Phil Silvers Archival Museum

Comparing the handwriting Baker and Stahl wrote on their draft cards, Bruce Edward Baker’s handwriting seems more consistent with the Bruce Baker signatures from Ding Dong and Frisky Fables, so I think it’s more possible that “Bruce Baker” isn’t a pseudonym in those comics.