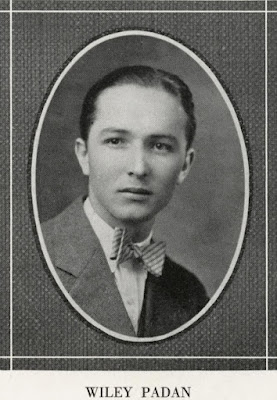 
William Wiley Padan* was born in Portsmouth, Ohio, on January 3, 1901, according to the the Ohio, Births and Christenings Index at Ancestry.com. His parents were John W. Padan and Vina J. Komptin as recorded on their marriage certificate.

According to the 1920 census, the Padan family lived in Pueblo, Colorado, at 1935 Berkley Avenue. Padan’s paternal grandmother was part of the household. The Pueblo Chieftain, October 21, 1919, reported “the editorial staff for The Wildcat, the annual published and edited by the senior class of Central high school published at the end of the school year, was elected yesterday (Monday) afternoon…” Padan was elected as one of six associate editors.

Information regarding Padan’s art training has not been found.


Padan attended the University of Missouri where he was a freshman assistant on the yearbook, The Savitar, for 1922. Padan was active in one of the military groups, Company M; a pledge with Phi Gamma Delta; and a member of the Ad Club. The 1923 yearbook said Padan was an active member of Phi Gamma Delta.

After his sophomore year at Missouri, Padan continued his education at the University of Utah. Padan appeared in the Utonian yearbooks from 1925 to 1928. The 1925 yearbook had Padan’s class photograph, Utonian staff position as art editor, and Art Guild membership. The 1926 Utonian had Padan’s junior class photograph, his Utonian editor position, and his memberships in Pi Delta Epsilon, Skull & Bones, and Art Guild. In 1927 Padan was in the Art Guild and Owl and Key. The 1928 yearbook featured Padan’s senior photograph; his positions as Utonian artist, and Humbug editor; his role on the Publications Council; and involvement on the Junior Promenade committee.

Padan was in and out of the university as noted in the Utah Chronicle, February 5, 1926.


Wiley Padan, a former University of Utah student and editor of last year’s Utonian, has just received word from the American Legion auxiliary, Indianapolis, Indiana, that a poster designed by him was awarded third place in a nation-wide contest.

The Telegram, June 5, 1929, published news of Padan’s election as a member of the Town Hall club of New York City. The association of men and women “recognize and seek to encourage creative or constructive work in any line of human endeavor which makes for the enlargement and enrichment of life and the development thereby of a finer citizenship.” Padan was on the general committee. The newspaper added, “Recently he left the art department of the ‘Iron Age’ magazine to join the main office on Broadway of the Loew’s theaters, serving as staff artist in their publicity department.”

Padan has not been found in the 1930 census. The Phi Gamma Delta, December 1938, published this item.

American Newspaper Comics (2012) said Padan’s film actors panel, It’s True, ran from the mid-1930s to mid-1940s. The panel was distributed by the Metro-Goldwyn-Mayer film studio. Padan applied for a trademark for It’s True. The Official Gazette of the United States Patent Office, May 25, 1943, had this notice.

The Film Daily column “Along the Rialto”, February 11, 1942, published this item:


Wiley Padan recently completed the 400th cartoon of the “It’s True’ series which appears in M-G-M press books and made available to newspapers…..Padan started the feature in 1933 and it has appeared continuously since then, not only in domestic papers, but in periodicals printed in South Africa, Philippines, Greece, China, India, New Zealand, England and Hungary. 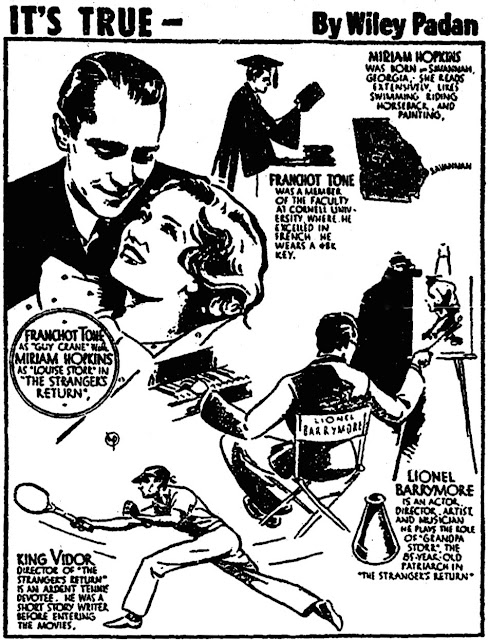 * Padan was erroneously identified as a Cuban artist in Hollywood in Havana: Film Reception and Revolutionary Nationalism in Cuba Before 1959 (2008).