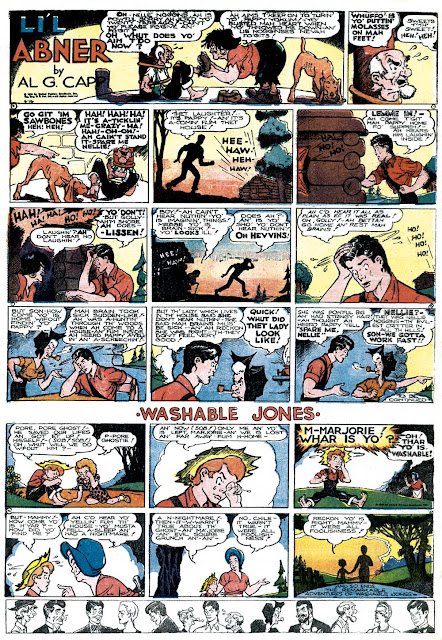 When Al Capp's Li'l Abner became an almost overnight hit for United Feature Syndicate in 1934, they requested that Capp create a Sunday page to accompany the daily. The Sunday started about six months after the daily, debuting on February 24 1935. Capp needed to come up with a topper strip to accompany Li'l Abner, and the result was Washable Jones. This topper appeared only in the full and tab versions of the strip; in halfs there was no topper included.

In this series Capp used the same familiar hillbilly milieu to tell a fantasy about a boy who gets into fantastical adventures. The strip definitely had a dashed-off quality to it, and Capp presumably wasn't satisfied with what he'd come up with. He also probably wanted more room to develop his Li'l Abner Sunday stories. That meant jettisoning Washable Jones after a mere four months, who's adventures turned out to just be a dream on the final Sunday of June 16 1935 (sample above). The next week Li'l Abner gained another full tier of panels plus a page-wide title panel. The only remnant of a topper was a small panel cartoon titled Advice fo' Chillun, which we'll talk about some other day.