Wish You Were Here, from Thomas Nast Jr. 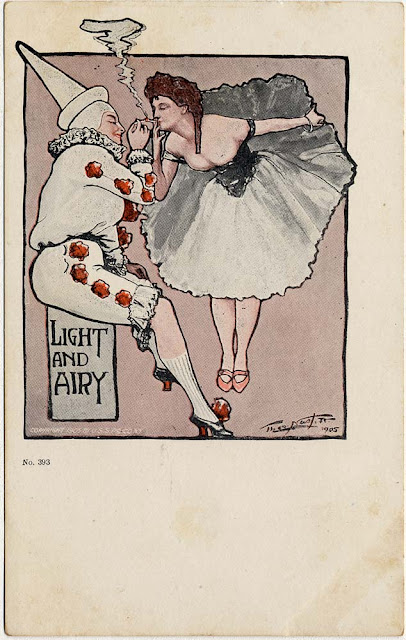 Here's a 1905 postcard by Thomas Nast Jr., published by the U.S.S. Postcard Company. Yes, this really is the son of that Thomas Nast. Junior's postcards are mostly pretty girl subjects, and he brings a distinctive and delightful 'European poster'-inspired flair to this one. The odd size of the illustration makes me wonder if it was originally intended for something other than a postcard.

Biographical information on Junior is sadly lacking. Paine's biography of dad barely mentions Junior. I wonder what else Junior did with his talent?

Comments:
For what it's worth, I did locate his entry in the 1930 census; he was 65 then, widowed, and living with his brother Cyril in Larchmont, New York. He didn't appear to have had any children. The 1900 census lists him as an artist living at West 106th Street in New York. He apparently served in neither the Spanish-American War (born in 1865, he would have been 33 for it) nor World War I (likely far too old for service).

Right now, I'm tracking down an intriguing lead. McCann, the well-known advertising agency, posted on Twitter a copy of a logo they say was designed by Thomas Nast, Jr. ("Truth Well Told,") and they say he was one of the founding partners of the agency.

One of the five original investors, but he didn't stick around. http://www.truthwellbrewed.com/blog/2016/11/9/the-mccann-time-capsule-a-nast-family-affair