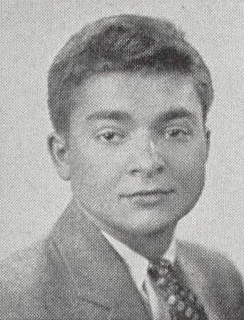 Abraham William “Abe” Ajay was born on March 24, 1919, in Altoona, Pennsylvania according to his Social Security application which was transcribed at Ancestry.com. His parents were William T. Ajay and Mary Simmons.

The 1930 census recorded the family of five (Ajay had a sister) at the same location..

Ajay graduated from Altoona High School in 1937. The school yearbook, The Horseshoe, said Ajay was president of the Statesman Club.

The New York Times, March 14, 1998, said Ajay “moved to New York City to study at the Art Students League and the American Artists School in Manhattan, where he became friends with Ad Reinhardt, Will Barnet and Robert Gwathmey. He was hired as an artist by the Work Projects Administration in the Depression.”

According to the 1940 census, Ajay, his wife and son, Alexander, resided in Queens at 2052 32nd Street. Ajay was an artist working on a “N Y Art Project” that was through the Work Projects Administration.


We have just finished one of the most difficult tricks in the comic business.We managed to shift from one artist to another on our little one-column panel comic, The Scuttles, without missing a beat. Checking among some of our readers, we were not able to find that any of them knew that a different artist had been doing the job since last Sunday, when we used the last of Charlie Martin’s Scuttles.

Martin, who had been in our Art Department since the paper started, has joined up with the OWI for foreign service. The new man—we put his name on the panel for the first time today on page 11—is A. W. Ajay. We just call him Ajay and that’s the way he signs his work.

This is going to get complicated right now, but we have two Ajays. The original, is Andrew J. Hull, another artist in our department who once worked some place where there was another man with his name. As a result, they made up the name Ajay from Hull’s first two initials and pinned that on him so he wouldn’t be confused with the other man and he has been using it ever since. Now Ajay, in the person of Hull, and Ajay, in the person of the real Ajay, have all of us mixed up most of the time. Whenever anyone calls “Ajay,” both of them respond. Whenever anyone tries to talk to an artist about an Ajay, he usually finds he is talking to the wrong Ajay. I don’t know if you’ve followed it this far, but anyhow it’s complicated.

We’re going to solve the problem by signing Hull’s stuff—A. J. Hull and that will leave the other Ajay—the new Scuttles man—with full rights, title and interest to his own name on our paper. The Scuttles Ajay, incidentally, is a friend of Charlie Martin’s and they have talked over and worked out art problems together a lot. That’s why he was able to pick up Martin’s style and carry along the Scuttles without anyone knowing that a new artist had taken over.

On February 27, 1947, Ajay returned from a visit to Havana, Cuba. He landed in Tampa, Florida then continued on to Newark, New Jersey. The passenger list had his address as 210 East 68 Street in New York City.

In the Catalog of Copyright Entries, Third Series, Volume 10, Parts 7–11 A, Number 1, Works of Art, January–June 1956, Ajay copyrighted his Mr. Caper cartoons that were published in Sports Illustrated.

In the 1960s Ajay turned from commercial art to pursue fine art. The Times said Ajay produced “reliefs made of found objects. Later his constructions, often intricate in design, were created from tooled wood, gypsum and cast plastics…He had his first one-man show at the Rose Fried Gallery in Manhattan in 1964 and a 25-year retrospective at the Aldrich Museum of Contemporary Art in Ridgefield, Conn., in 1990.” Ajay taught at State University College at Purchase, New York. The Metropolitan Museum of Art, the Solomon R. Guggenheim Museum and the Hirshhorn Museum and Sculpture Garden collected works by Ajay.

Abe Ajay by Lee Hall was published by the University of Washington Press in 1990.