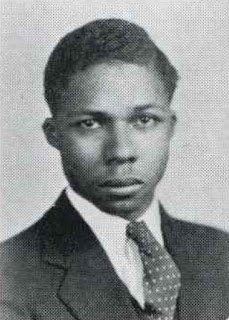 Melvin Stanton “Mel” Tapley was born in Peekskill, New York on May 29, 1918, according to his Social Security application which was transcribed at Ancestry.com. Tapley’s parents were Harry Tapley and Louise James.

In the 1920 U.S. Federal Census and 1925 New York state census, the Tapley family of three lived in Cortlandt, New York at 1105 Park Street. Tapley’s father was a chauffeur.

Tapley’s childhood activities were well documented in the local newspaper, Peekskill Evening Star. Tapley attended the elementary Oakside School. The April 21, 1926 Evening Star reported the outstanding pupils in March and said Tapley ranked seventh in his third grade class. Three weeks later the Evening Star said Tapley was one of 400 children participating in the Marble Championship Contest. Tapley’s musical talent, as a piano soloist, was heard at his school’s Assembly Hall on June 2, 1926. Tapley was fourth in his class during the months of May and June, according to the Evening Star. Tapley had perfect attendance in the months of September and October 1926.

At a recital by Miss Adelaide Craft’s School students, Tapley and another student were awarded gold medals, as reported by the Evening Star, June 22, 1927.

One of Tapley’s friends visited for two weeks.

At the Oakside School Arbor Day program, Tapley played a piano solo, according to the Evening Star, April 19, 1928.

On May 2, 1929, the Evening Star listed the members, including Tapley, of the “Just Kids Safety Club”.

Tapley’s address was unchanged in the 1930 census.

The Evening Star, February 26, 1930, said Tapley was one of the seventh grade representatives in the spelling contest.

Ninth-grader Tapley was on the honor roll according to the Evening Star, February 12, 1932. Two months later, Tapley was a member of the National Junior Honor Society.

The April 29, 1932 Evening Star said scores of students created posters for Love Pirates of Hawaii, a two-act opera produced by the junior high school. Tapley’s poster was displayed at the Cattuti Floral Shop.

The Evening Star included a page, The High School Tattler, produced by the Peekskill High School journalism students. In the September 27, 1933 issue was an article about the change in the school’s newspaper, Keyhole, from a daily paper to a bi-monthly magazine. Tapley was one of three students responsible for contributing art.

Tapley was one of eleven students initiated into the National Honor Society according the Evening Star, June 14, 1935. Eleven days later, the newspaper listed the Class of 1935 graduates which included Tapley. He was also a member of the Quill and Scroll Society, an honor society for journalists.

The Evening Star, March 14, 1936, said Boy Scouts Troop 21 held a banquet celebrating its eighth anniversary. Tapley was a participant in the signaling demonstration, “Scout John Jackson directed a demonstration of sending and receiving the semaphore code. Melvin Tapley sent the message, ‘You will be welcome at the Scout rally on March 25 at the Peekskill High School gym.’ It was received with but one minor error, by Charles Bolden.’”

The New York Age, May 16, 1936, published the results of the annual Elks Oratorical Contest and said “Second prize was awarded to Melvin Tapley of Peekskill whose subject was ‘Booker T. Washington and the Constitution.’”

The Evening Star, December 22, 1936, said Tapley received a cooking award at the Boy Scouts rally in his district.

The Peekskill Junior League, a black social service group, held a dance to raise money for the March of Dimes. The Evening Star, January 30, 1939, noted that Tapley was the president of the league.

The Evening Star, April 6, 1939, said Tapley won a scholarship, valued at approximately $2,500, from the Art Students League of New York. His and other winners’ work were scheduled for an exhibition later in the month. The article added that Tapley was finishing his art course at Cooper Union and “anticipates completion of night courses in psychology and English at New York University next September.”

Tapley’s graduation from Cooper Union was reported in the Evening Star, June 8, 1939. He was awarded a degree in graphic design. 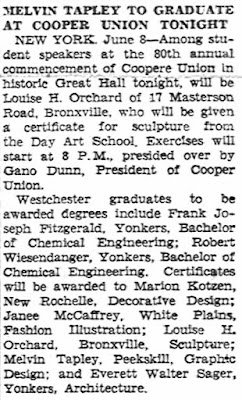 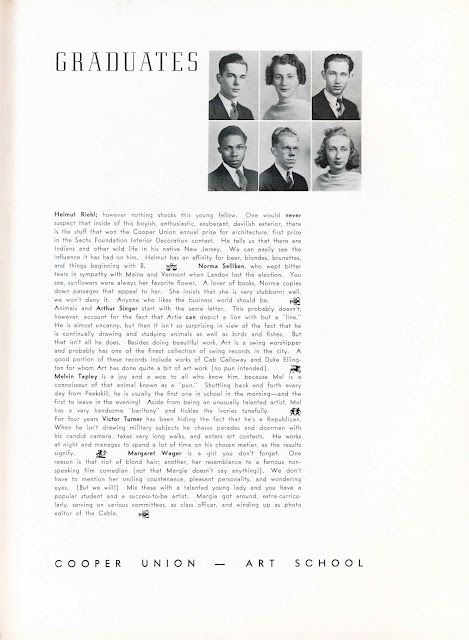 
Melvin Tapley is a joy and a woe to all who know him, because Mel is a connoisseur of that animal known as a “pun.” Shuttling back and forth every day from Peekskill, he is usually the first one in school in the morning—and the first to leave in the evening! Aside from being an unusually talented artist, Mel has a vey handsome “baritony” and tickles the ivories tunefully.

The Class of 1939 included designers Herb Lubalin and Lou Dorfsman. Pictured in the 1939 yearbook were Jeanyee Wong (Class of 1941) and Roy Krenkel, a freshman or sophomore.

In the 1940 census, Tapley lived with his parents and brother in Peekskill at 8 Charles Street.

Judge Joseph M. Fox’s book, The Story of Early Peekskill, was published in 1947, and featured drawings by Tapley.

The Catalogue of Copyright Entries, Third Series, Volume 3, Part 1B, Number 1, Pamphlets, Serials and Contributions to Periodicals, January-June 1949 had this entry on page 308:

Pioneering Cartoonists of Color (2016) said he also used the pseudonyms T. Melvin and Stann Pat. Under the name of Stann Pat he created Do's and Don'ts and Your Public Conduct.

A passenger list, at Ancestry.com, recorded Tapley’s return from the Bahamas on June 2, 1962.


Melvin S. Tapley (PHS [Peekskill High School] Class of 1935) distinguished himself as an accomplished editor, artist and pioneer cartoonist as arts and entertainment editor of the Amsterdam News in New York City until his retirement in 1997. Mr. Tapley was president of the local NAACP chapter for eleven years until he resigned in 1968.