Benjamin Pearson Elliott was born in August 1868, in Philadelphia, Pennsylvania. The birth information is based on the 1900 U.S. Federal Census. Elliott’s middle name was on his headstone.

In the 1870 census, Elliott was the youngest of four children born to Joseph, a watchmaker, and Sallie. They lived in Philadelphia. The 1880 census said their address was 230 North 21st Street.

Elliott’s education was mentioned in the Philadelphia Inquirer. The Inquirer June 27, 1883, reported the results of the examination for admission to the Philadelphia High School and Elliott was accepted. In the Inquirer, February 12, 1886, Elliott was named a meritorious pupil for “having attained term average of 85 or over, but less than 95”. Elliot was mentioned in the Annual Report of Acting President Hopper of the Central High School for the Year Ending December 31, 1887. Elliott received a Bachelor of Arts and a Teachers’ Certificate.

Apparently Elliot’s first line of work was indexmaker* according to a listing in an 1890 Philadelphia city directory. His home was 230 North 21st Street. The 1895 directory said Elliott and his brother Charles worked with their father at the J.S. Elliott Company. The 1899 Boyd’s Co-partnership and Residence Business Directory of Philadelphia City said Elliott was the manager of J.S. Elliott Company.

The 1900 census recorded Elliott, who wife, Bessie, and daughter, Sarah, in Philadelphia at 321 Wilton Street. His occupation was indexmaker. The same address and occupation were in the 1900 and 1901 city directories.

So far the earliest record of Elliott the artist was found in The Quarterly Illustrator, April, May, June 1894, which published his ”Still Life”. This was his entry in the index, “Elliott, Benjamin P., 230 North 21st Street, Philadelphia, Pa……159”. 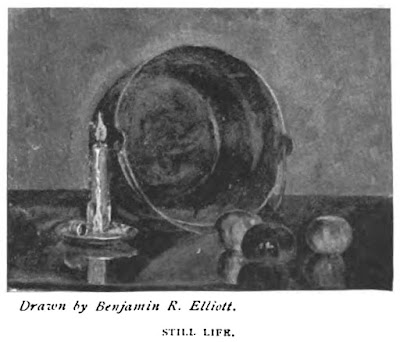 Elliott was a member of the Philadelphia Sketch Club which has portraits of some members by Thomas Anshutz who painted them between 1899 and 1900. There are two portraits of Elliott but I suspect the first portrait, in row four, is of Elliott while the second portrait, in row ten and out of alphabetical order, is not him. (Also in row ten is a portrait of T.S. Sullivant.)

The 1902 directory said Elliott was an artist with a studio at 514 Walnut Street. His home remained 230 North 21st Street. The Inquirer, February 16, 1902, covered the Philadelphia Sketch Club annual meeting and said Elliott was on the House Committee.

American Newspaper Comics (2012) said Elliott drew Adventures of the Stranded Dime Museum Freaks for the North American Syndicate. It ran from March 9 to May 25, 1902. 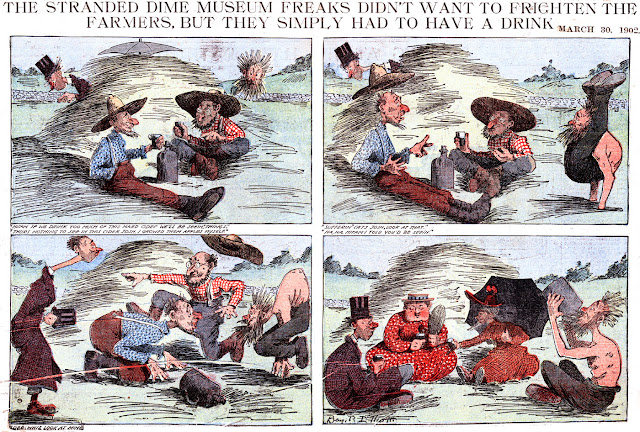 Elliott had two listings in the 1905 directory: “Benjamin Elliott” the clerk, and “Benjamin P. Elliott” the artist. The 1906 Boyd’s Philadelphia Blue Book included listings for the Philadelphia Sketch Club and among its active members was Elliott who was in Texarkana, Texas. The 1906 Texarkana, Arkansas and Texas, city directory said Elliott resided at 614 Olive Street and was a clerk with the T & F S Railway.

According to the 1910 census, Elliott and his wife, Idalia, were residents of Texarkana, Arkansas at 1602 County Avenue. Elliott was an accountant with the railroad. The 1914 directory listed Elliott as a bookkeeper with the Southwest Gas and Electric Company. The entry in the 1917 directory said Elliott had moved to Corpus Christi, Texas.

The 1920 census Elliott and his wife were in her father’s household in Texarkana, Arkansas. Thomas H. Davis was a carpenter with a wife and five children, including Idalia. Elliott operated his own grocery business. They all resided at 1109 County Avenue.

City directories in the 1920s and 1930s listed Elliott and his wife as the operators of Elliott Grocery Shop at 1321 County Avenue.

Elliott passed away September 2, 1936, in Texarkana. He was laid to rest at the State Line Cemetery.

Several issues of the Middlesex County Historical Society’s pamphlets said the society has a “Painting by Benjamin P. Elliott, who lived on the corner of Court and Pearl Streets, Middletown.” I have no record of Elliott residing in Middleton, Connecticut, but it can’t be ruled out. There was another artist named “Benjamin P. Elliott” who was listed in Bulletin of the American Art-Union, December 1, 1850. He resided in Providence, Rhode Island and perhaps once lived in Middleton.