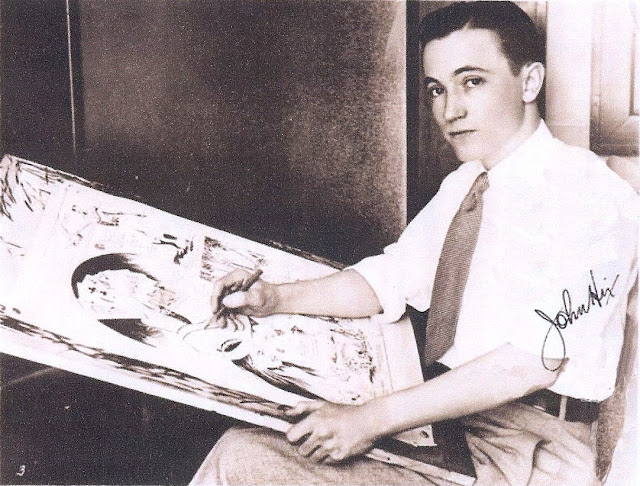 John McCary Hix was born on June 17, 1907, in Huntsville, Alabama. Hix’s full name and birth date were recorded on his death certificate. The birthplace was mentioned in articles published in newspapers such as the Huntsville Times and The State (Columbia, South Carolina).

In the 1910 U.S. Federal Census, Hix, his parents, John and Viola, and older brother, Ernest, were part of Russell McCary’s household. McCary was Hix’s maternal grandfather who had five daughters. Hix’s father and grandfather were commercial travelers in the baking powder trade. Hix’s grandmother was a farmer. They were Huntsville residents living on Meridianville Pike.

A lengthy profile of Hix was published in numerous newspapers. Each paper tailored the profile to fit its needs. For instance, the Huntsville Times emphasized Hix’s birth in Huntsville and less on the numerous oddities, while the Chatham Courier (New York) apparently kept most if not all of the oddities. The papers referred to Hix as Johnny Hix but rearranged the order of the paragraphs.

The Huntsville Times, July 20, 1932, said the Hix “family moved to Nashville, then to Spartanburg, S.C., and finally to Greenville, S.C….”

The 1920 census recorded the Hix family of five in Greenville, South Carolina at 593 North Main Street. Hix’s father was a clerk at a drugstore.

According to the Chatham Courier, April 7, 1932, Hix contributed drawings to the high school magazine Nautilus and also got in trouble for caricaturing his teachers.

A profile of Hix in Dansville Breeze (New York), June 16, 1942, said “While still a newsboy, John took the first three lessons of a correspondence course in cartooning, decided he was an artist, applied for and got the assignment to do a weekly news cartoon for The News.”

In the Huntsville Times, Hix said


“Well, I was made!” He declares, “I had arrived! I was earning $12 a week! Of course, all of this huge sum did not come from being a staff artist. Seven dollars was my salary as carrier boy for the same paper. The carrier boy was making more than the staff artist.

…My efforts at cartooning kept me busy late at night and the alarm always rang at 3 a.m. I was due at the office at 4 a.m. At the same time, I was local agent for several magazines and had followed the usual course of studying my life work via correspondence, since there was no art school at hand.”

…“Between drawing, delivering and selling newspapers, and trying to collect for them, I still managed to find a little time for my duties at school. But that part of it suffered, and bad report cards do not make peace in a family.

…“The success of being a staff artist must have gone to my head. I decided that I was too good for a little Southern town of 30,000, and migrated northward. I woke up a month later drawing cartoons for The Washington Times. The Times dated me as the youngest cartoonist in the country—and the worst.

Hix’s decision to move to Washington, D.C. was influenced by his brother’s presence there. The 1924 Boyd’s District of Columbia Directory listed Ernest Hix at 1334 I NW. The directories for 1925 and 1926 said Ernest, whose address changed each year, was a salesman with Hughes & Company. The Dansville Breeze said “In 1926 he went to Washington to live with his brother Ernest, then in the securities business…On the day of John’s arrival Avery Marks, managing editor of The Washington Times gave him an art department job at $15 per week. A year later young Hix was doing political cartoons at $25 a week….”


The American Nature Association’s national cartoon contest on “outdoor Good Manners” has been won by Mrs. Florence McCabe, Grants Pass, Oreg. The award was $100. Second prize went to Craig Fox of the Rochester Democrat and Chronicle, $50; third prize to John M. Hix of the Washington Times, $25.

According to the Dansville Breeze, Hix produced a “one-column panel of rural philosophy called ‘Hicks by Hix,’ but that didn’t get very far.” Hix used forty dollars of his savings and failed to sell “a strip of burlesquing newspaper life” to a Cleveland syndicate. Hix used his next forty dollars and


went to New York with another armload of strips. A syndicate managing editor, Howard [sic] Matson, didn’t like John’s present material, but saw enough promise in it to sit down and draw out the youth on the subject closest to his heart. From this conference emerged the discovery that John Hix already had a wealth of material on oddities and strange facts, and the suggestion that he work them up into a daily cartoon….Within a year John was back in New York with “Strange As It Seems.” The feature caught on quickly…

…he was simultaneously drawing two other features, a strip of O. Henry stories and one on Frank Merriwell. He got $50 for the whole shooting match, devoting two days a week to each of the three cartoons.

American Newspaper Comics (2012) said Hix drew three series for the McClure Newspaper Syndicate: Gilbert Patten’s Young Frank Merriwell from March 26, 1928 to September 28, 1928, and O. Henry’s Short Stories from June 11 to June 30, 1928. Time magazine’s June 10, 1929 issue printed a letter from Harold Matson, managing editor at McClure Newspaper Syndicate, who gave a brief early history of the series: “‘Strange As It Seems’ by John Hix was in preparation in December, 1927, was announced by The McClure Newspaper Syndicate in February, 1928, and was released on regular schedule, March 26, 1928.” Actually, Strange as It Seems was announced in Editor & Publisher and The Fourth Estate in its January 28, 1928 issue (detail below). 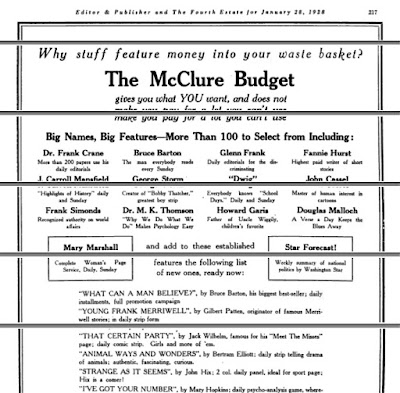 The success of Strange as It Seems caught the attention of Hollywood. The Universal Pictures publication, Universal Weekly, June 14, 1930, announced their purchase of picture rights to Strange as It Seems. “There will be thirteen one reelers in the Hix series, and a radical departure will be made by the use of color throughout. The cartoons will thus combine comedy, originality, animation and color. They mark a distinct innovation in the short subject field.” 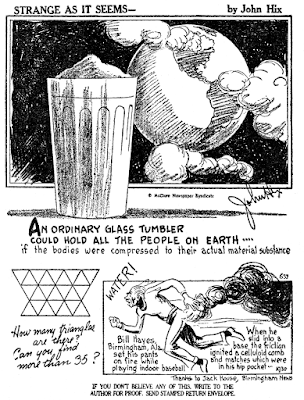 It’s not known where Hix lived in New York City. The 1930 census said newspaper artist Hix was in Washington, DC at 4912 Farragut. In the 1931 District of Columbia directory Hix resided with his mother and brother at 4912 New Hampshire Avenue NW, in apartment 102, and worked at 1346 F NW, room 930. Around 1931 they moved to California.

Popular Aviation, November 1935, published the first in a short-lived series of Strange as It May Seem cartoons which were sponsored by United Airlines.

Strange as It Seems was adapted for radio and collected in books and comic books. 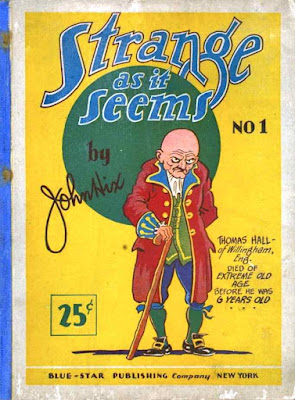 The Dansville Breeze explained how Hix produced the strip: “To turn out ‘Strange As It Seems’ daily and Sunday he maintains a staff of seven persons. There are three researchers, drawn from the research departments of the movie studios, two assistant artists and two secretaries….Every fact must be verified before use, then pass a rigid standard of editorial value which Hix has maintained.” 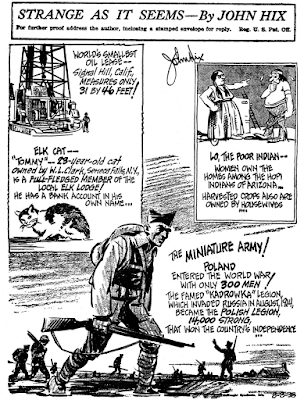 Hix passed away June 6, 1944, at his home. The Los Angeles Times reported his death the following day and said “John M. Hix, who became the youngest nationally syndicated artist at the age of 20, fell against a parked automobile in front of a hotel at 1714 Ivar Ave. Monday evening. He was taken to his home at 1745 N. Gramercy Place by his physician, Dr. J.G. Kauffman. There he died yesterday morning of what appeared to be heart attack. A Coroner’s investigation will be conducted today. ” He was laid to rest at Forest Lawn Memorial Park. https://www.findagrave.com/memorial/8641117

American Newspaper Comics said Hix’s last daily strip was on July 29, 1944 and last Sunday page on August 6, 1944. Strange as It Seems was continued by Ernest, followed by Ernest’s wife, Elsie, then Ernest Jr. with his wife Phyllis. Some of the artists include Dick Kirby, Doug Heyes, George Jahns and Jack Ozark.

Comments:
The Strange As It Seems one reel films were not as the pre-production hype might lead one to believe, and didn't use color. If any animation was seen, it was of the most basic quality, like you'd see in an ad or school film. They were produced by Jerry Fairbanks, so these were set up like a travelogue/newreel, much as we can still see in the competing Ripley's Believe It Or Not series produced by Vitaphone at the same time. It is probably unlikely that any of the 'Seems' films are around today, at least not the Universal ones. The series eventually went over to Columbia, so those might be still in their deep dark vaults.

Craig Fox of the Rochester Democrat appears to be the Craig Joseph Fox born in 1895: