Jerome Emil “Rome” Siemon was born on August 8, 1900, in Rock Island, Illinois. His first name, Jerome, was recorded in the 1910 U.S. Federal Census and his Social Security application. The middle name was on his World War I and II draft cards.

According to Illinois marriage records at Ancestry.com, his parents were Peter Siemon and Emma Johnson who married on September 25, 1899 in Rock Island County, Illinois. The 1900 census was enumerated in June. Siemon’s mother was living with her mother, Anna, siblings, niece and nephew in Rock Island at 613 Ninth Street. The whereabouts of Siemon’s father is not known.

The 1910 census said Siemon and his mother, who was divorced and a nurse, were living with his maternal grandmother and aunt in Rock Island at 613 9th Street.

The Rock Island Argus, January 20, 1914, published the names of the Hawthorne School eighth grade graduates. “Romie Siemon” was one of 35 graduates. The name Romie was used in city directories and in later censuses.

Siemon signed his World War I draft card on September 12, 1918. His home address was 1125 3rd Avenue in Moline, Illinois. He was a clerk at the Rock Island Plow Company. He was described as medium height and build with blue eyes and brown hair.

The 1919 Moline directory said he was a clerk at the “Peo Power Company” in Rock Island. His address was 1125 3rd Avenue, and in parentheses was the name of his wife, Olga.

On July 24, 1923, Siemon married Beatrice Vogel in Clinton, Iowa as recorded in the Iowa marriage index at Ancestry.com.

According to the 1930 census, the couple resided in Moline at 1602 3rd Avenue. Siemon was a hotel manager. In a few years Siemon moved to the West Coast.

Siemon, his wife, two sons and mother were at 6336 1/2 Homewood Avenue in Los Angeles, California. Siemon was a hotel manager and his wife a hotel maid. The census said Siemon was in Los Angeles in 1935 and his highest level of education was the eighth grade. Siemon’s World War II draft card named his employer, the St. Paul Hotel. He was five feet eleven inches, 180 pounds with blue eyes and brown hair.

Information about Siemon’s art training has not been found. 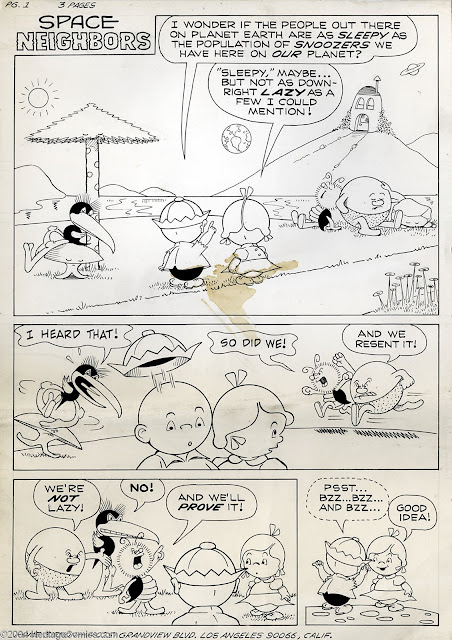 
Rome Siemon, the fairly widely known cartoonist who got his start in his working life pounding a piano in a nickel movie in Rock Island (he was just a kid and his family was poor) apparently has been doing some Christmas shopping and thinking of poor orphan youngsters. For several years Mr. Siemon, who lives in Hollywood, Calif., has been, taking time out from a busy working career to draw cartoons to help the Moline Good Fellow Christmas fund sponsored by the Dispatch. Rome knows what it is to be up against it at one stage in his career that was in Moline he found the piano playing picking so poor that he thought he was lucky to get a part-time job as a LeClaire hotel elevator operator. If Siemon’s cartoon plea appeals to you, send a contribution to this Christmas program to bring some cheer to needy children and widows to Good Fellow Fund, Moline Dispatch, or drop in with buck or two (or more) and some one at the Dispatch office will be glad to take it.

Who’s Who of American Comic Books 1928–1999 said Siemon did lettering for Western Publishing in the early 1950s into the 1960s. In the Jack Kirby Collector #71, Spring 2017, Mark Evanier said “…Mike [Royer] learned to letter from Mike Arens. Mike Arens learned lettering largely from a man named Rome Siemon, who was the house letterer at Western Publishing, on the West Coast books for years….”

Siemon passed away October 6, 1969, in Los Angeles according to the California death index. He was laid to rest at Forest Lawn Memorial Park.