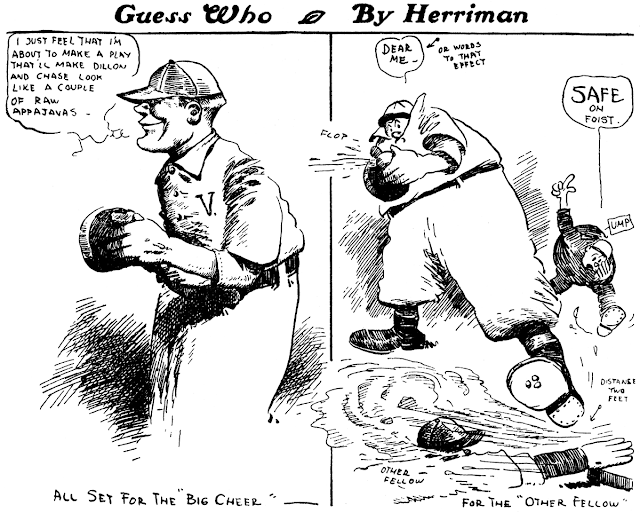 July 11 1909 -- Although this could theoretically be any Vernon pitcher, I'm betting it is Roy Hitt.  Herriman highlights the jutting chin, which matches with Hitt, and he came up the loser in a 1-0 11-inning game yesterday against Portland.

Pitching for the Vernon team, this superb pitcher would often be left in the lurch by the rest of his squad in 1909. He had a cup of coffee in the bigs in 1907, but his career was primarily as an ace pitcher in the minors, where he won over 200 games.

Comments:
I wonder about the ID. "Dillon" is probably Frank Dillon, who had been a major-league first baseman and at this point in time was a player-manager for the Los Angeles Angels of the PCL. "Chase" is probably Hal Chase, regarding as a peerless defensive player (as Wiki says), though he was viewed as corrupt by many. Those two references, plus the play at first in the second panel, make me think that this is a first baseman being depicted here. I can't put my finger on who might have played 1B for Vernon that year, since Baseball Reference is a bit sketchy on the team. Hitt, by the way, was 15-30 for a truly awful Vernon team of 1909.

(For "regarding" above read "regarded.")

Another point to note: I think the player is wearing a first-baseman's glove, rather than the multi-fingered glove common for other infielders of the era.

You're right. I took the two panels as depicting different players, since player one seemed so hawkish and the other more of a jelly donut sort. My scenario fits in well with Hitt not being backed up by his fielders. But your explanation makes more sense.

"Kitty" Brashear played first for Vernon in that game.

I looked up "Kitty," and there's a bunch of images of him available on the Internet. Sure looks like the fellow in the drawing, with the chin. I actually think your point about Hitt "not being backed up by his fielders" *is* correct; clearly, the point of the cartoon was that Brashear was confident of making a great play (hence comparisons to stellar 1Bs), but when it came down to it, he couldn't make the play. The "jelly doughnut" look, with his head scrunched down in his collar (embarrassment?) is, I think, a function of Herriman's use of perspective, in this case, from low down on the first-base line.