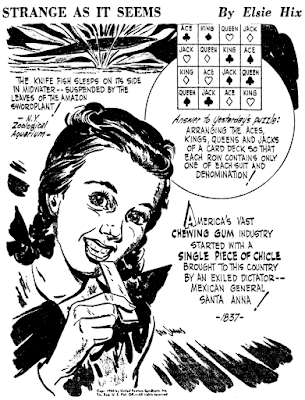 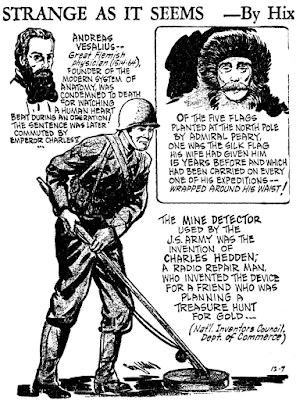 George Irvin Jahns was born on October 23, 1907, in Davison, South Dakota, according to the South Dakota Birth Index at Ancestry.com. His parents were Lorenzo Jahns and Bertha Haut. Jahns’s full name was on his death certificate.

The 1910 U.S. Federal Census recorded Jahns and his parents in Mitchell, South Dakota at 1000 West Second Avenue. His father was an engineer and his mother a German emigrant.

In 1920 the Jahns family included a daughter. The quartet resided in Mitchell at 908 West Second Avenue. The Jahns were Mitchell residents, in the 1930 census, at 908 West Hanson Street. Jahns was unemployed.

Information regarding his art training hs not been found. Sometime between the census and 1935 Jahns moved to California.

Jahns was a newspaper cartoonist in the 1940 census. He and his wife, Lucille, lived at 314 South Griffith Park Drive, Glendale, California. Jahns had four years of high school education and his home was valued at $4,400.

A military record has not been found for Jahns. He illustrated Combat Insignia Stamps of the United States Army & Navy Air Corps (1942) and War Insignia Stamp Album and 50 Original Postamps (1944).

American Newspaper Comics (2012) said Jahns was the fourth artist to draw Strange as It Seems. Jahns was preceded by John Hix, who created the series in 1928, Dick Kirby and Doug Heyes. Jahns did the series from January 17, 1949 to April 9, 1966. Jahns was followed by Jack Ozark and Ernest Hix Jr.

The Redwood Journal-Press Dispatch (Ukiah, California), March 12, 1954, published a photograph of Jahns and Elsie Hix (John Hix’s sister-in-law), who was profiled in the article.

The Official Gazette of the United States Patent and Trademark Office published this entry for Jahns’s mugs.

The applicant disclaims the exclusive right to the word “Mugs,"and is only claiming a right to the mark as a whole. For Coffee Mugs, Beer Steins, Children's Mugs and

On January 12, 1979, Jahns married Ruth I. Buell in Orange County, California, according to the California Marriage Index at Ancestry.com.

Jahns passed away March 7, 1994, in San Diego County, California. He was laid to rest at Forest Lawn Memorial Park.

Comments:
Hello, I am a son of George Jahns. Thank you so much for recognizing our father's work in your history of comic strips. Mr. Jay did an excellent job in digging up information from the pre-internet era, but of course, being family, I have many more details that can fill in some of the blank spots. At this point, I am unsure of just what may be of interest. For now, let me just offer to add information on any points that you are curious about. I have checked the box in the form so follow-up comments will be emailed to me.