Information about Linda Walter is scarce. What is known about her comes from several newspaper and magazine mentions.


Page 42: Most appropriate reference was a cartoon drawn for The Saturday Evening Post by Linda Walter, whose caption pointed up the air-mindedness of the younger generation (see cut).

Page 70: Last month on page 10, New Horizons proudly displayed Linda Walter’s becoming cartoon reprinted from one of the Saturday Evening Post's April, ’42 issues. The cartoon depicted three youthful figures, one of whom is saying to the others: “Mayflower—Phooey…our uncle came over on the Clipper!”

The Kingston Daily Freeman, June 23, 1948, reported the opening at the Woodstock Playhouse and said “The group exhibition by Woodstock’s cartoonists created much interest. Those represented in the in the lobby of the Playhouse are John H. Streibel, creator of the Dixie Dugan strip. Carl Hubbell, Jerry and Linda Walter; Jay Allan. David B. Huffine, and Edmund Good. Good formerly did Scorchy Smith, the Associated Press strip, but is now known for Breeze Lawson in the Sky Sheriff.”

The Kingston Daily Freeman, June 11, 1951, noted “Expressions of appreciation were given to Mrs. Linda Walter, who has been teaching dancing and ballroom deportment at the school…”

The Kingston Daily Freeman, September 26, 1951, said “At the recent annual meeting of the Woodstock Guild of Craftsmen the following officers for the coming year were elected: …Anita Stallforth and Linda Walter, house committee…”

The Kingston Daily Freeman, August 18, 1954, reported the benefit for the Woodstock Recreation Field. One paragraph included the following.

The Evening News (North Tonawanda, New York), July 3, 1953, announced the addition of Susie Q. Smith to its comics page and said about the creators:


Jerry and Linda Walter are an attractive young couple who can pinch-hit for each other in turning out the feature. Jerry normally dreams up the gags and Linda does the art work, but they can switch about when the occasion demands.

Married shortly before Pearl Harbor, the Walters worked for an advertising agency before Mr. Walters [sic] became a navigator for the Atlantic Transport Command. After the war, they dreamed up Susie and have had a highly popular gal on their hands ever since. 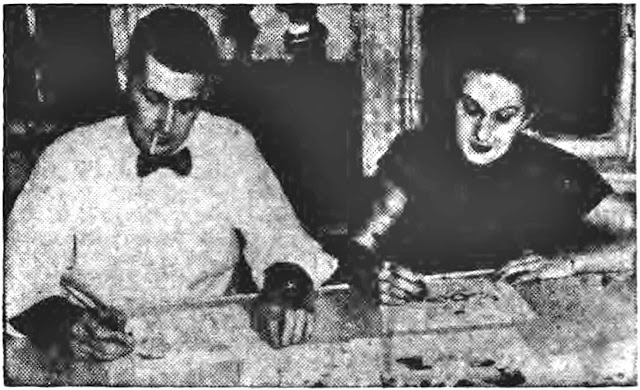 At Ancestry.com the New York, New York, Marriage License Indexes recorded the issuance of a license to “Ethelynde Stimpson” and “Harold F. Walter” on October 2, 1940. (Jerry’s birth name was Harold Frank Walter.) Ethelynde could be Linda. Looking at census records, Ethelynde was born around 1918 in New Jersey and her parents were William and Ethelynde. They lived in New Castle, Westchester County, New York in 1920. The 1930 and 1940 censuses said Ethelynde resided in Cranford, Union County, New Jersey. According to the 1940 census, Ethelynde was a secretary at a welding and metal company.

The Social Security Death has a “Linda Walter” who was born January 18, 1918 and died March 28, 2009. Her last known residence was Lake Hill, Ulster County, New York, which is about fives miles/8 kilometers west of Woodstock.