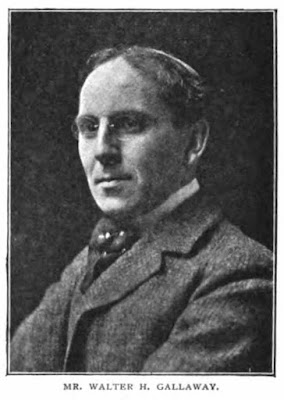 Walter Henry Gallaway was born on October 10, 1870 in Pendleton, Indiana, according to a profile at Indiana Illustrators and Hoosier Cartoonists. However, in the 1900 U.S. Federal Census, his birth was recorded as February 1871. Gallaway’s middle name, also his mother’s maiden name, was found in the Catalogue of Title Entries of Books, Second Quarter, 1903, Volume 367, Number 13.

The New York Herald, December 12, 1893, mentioned Gallaway in the article “Regarded as the Finest Edition of a Newspaper Ever Issued”.


Indianapolis, Ind., Dec. 11, 1893.—The Christmas number of the Herald arrived here this morning and before noon it was impossible to buy a copy of the paper. Newsdealers had ordered an extra supply and were surprised when they found themselves without papers so early in the day.

Louis Deschler, the newsdealer in the Bates House, said he never had such a run on Heralds. “I consider this the finest edition of a newspaper that has ever been issued,” said he, as he spread the pages of the last paper he had on the counter before him. “It is simply marvelous.”

The great feat of the Herald was discussed in all the local newspaper offices. Newspaper men all say that, considered in all its parts, it is the greatest edition an American newspaper has issued.

F. N. Hubbard, an artist who has had much experience on metropolitan newspapers, said:—“The Herald leads in all things. Its pictures are the best printed by any newspaper in the world. I supposed they had reached the highest standard one year ago. but there has been improvement over that great effort.”

In the Strand Magazine, May 1903, an article about American humorous artists included Gallaway.


Mr. Walter H. Gallaway, whose work appears regularly in Puck, humorously writes: “My ‘career’ is about as uninteresting as the fighter who was ‘down and out.’ I am thirty-one years old, and began to make drawings for publication, while on an Indianapolis newspaper, at the age of twenty. I did no humorous work until I came to New York in 1893, and began working at different periods on the World, Herald, and Journal. In ’97 I went to Puck, and since then I have contributed comic drawings regularly, with the occasional appearance in other papers of more serious stuff. I like best to do street urchins and farmers, and think that if any of my work has attracted attention it has been drawings of those characters.”

Gallaway’s address, 49 West 24th Street, was listed in the illustrators category of the 1898 Trow’s (formerly Wilson’s) Business Directory of the Boroughs of Manhattan and the Bronx, City of New York.

In the 1900 census, artist Gallaway shared an apartment with fellow Hoosier artist, Frederick Yohn. They resided in Manhattan at 106–108 East 23rd Street. Gallaway’s address in the 1903 city directory was the same.


Walter H. Gallaway, the illustrator, of New York, is a native of Indianapolis, and is one of the largest contributors to humorous papers in the United States. He has a keen sense of the ridiculous, and is, to his intimate friends, a born comedian. To all other he assumes an austerity that is non-breakable. His knowledge of current events and political personages are, as Charles Dickens expressed it, “consistent with getting up at eight, shaving close to quarter-past, breakfasting at half-past, and down to the city at nine.”

It was on one of his semi occasional visits to Indianapolis that he was standing by the cigar-stand in the Denison hotel, when he was accosted by Albert J. Beveridge, who had just been elected United States Senator from Indiana.

“Why, how do you do, Mr. Gallaway?” said Mr. Beveridge briskly, as he grasped him by the hand till Gallaway cringed. “I am glad to see you back in the city again.”

“Why—why—who are you?” Gallaway stammered out.

“Oh—yes!” replied Gallaway. “You’re running’ for something’, ain’t you?”

The Indianapolis News said “Mr. Gallaway immediately became known as one of the best of magazine artists. His work in Indianapolis had been of a general nature, but when he went east he devoted himself largely to humorous drawings. Much of his work was seen in Life, and he was also employed on the art staff of Puck. During a visit to London he made a large number of interesting pictures of London street scenes.” The Brooklyn Daily Eagle, September 15, 1901, named Gallaway as one of the passengers aboard the steamship St. Paul who arrived at the Sandy Hook Lightship the day before, having departed from Southampton and Cherbourg.

In the 1905 New York state census, which was enumerated in June, Gallaway was married to Minnie and resided in New Rochelle, New York. The New York, New York, Extracted Marriage Index, at Ancestry.com, has a person named Walter Gallaway who married on October 24, 1905 in Manhattan.

Gallaway passed away September 7, 1911, at his home in Westport, Connecticut, according to the Indianapolis News which said “His sickness was caused by a disease of the spleen.” An obituary also appeared in the Indianapolis Star, September 12. Gallaway was laid to rest in Brooklyn, New York.