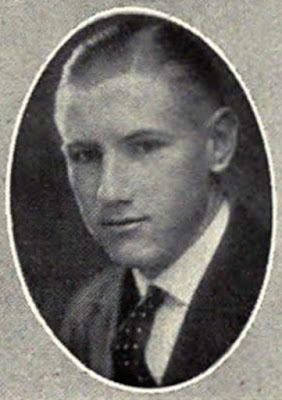 Carl Edwin Hammond was born in Michigan on August 13, 1898. The birth date is from Hammond’s World War I draft card which also had his full name.

In the 1910 census, Hammond, his parents and brother resided at 405 Ludington Avenue in Ludington.

Hammond attended Ludington High School beginning in 1913. He was the junior class treasurer and wrote an article in the 1915 yearbook, The Oriole. 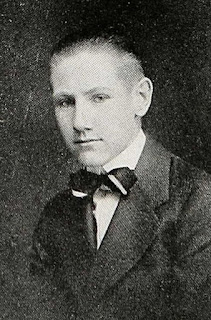 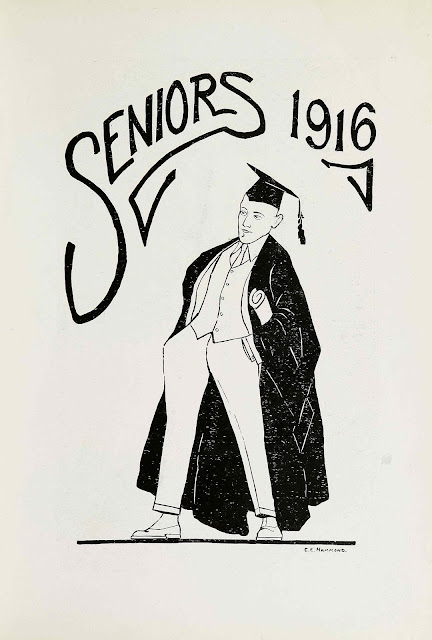 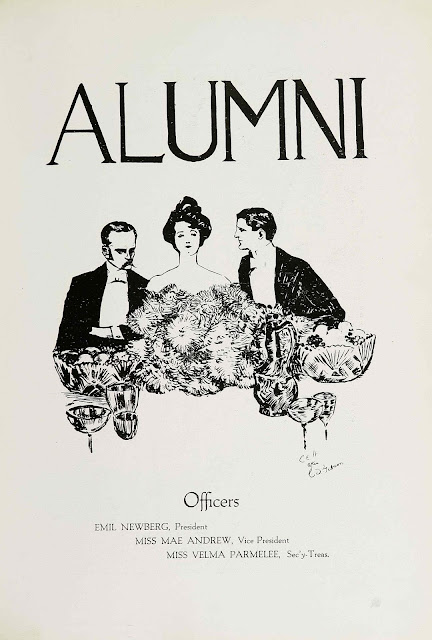 On September 3, 1918 Hammond signed his World War I draft card. He still lived at home with his parents in Ludington. His occupation was commercial traveler with the D.M. Ferry Company of Detroit, Michigan. Hammond was described as slender build and medium height with blue eyes and light-colored hair.

According to the 1920 census, the Hammond family were Ludington residents.

Hammond attended the University of Michigan and was in the class of 1921. In the 1920 yearbook The Michiganensian, Hammond was on the yearbook editorial staff, and on the art staff of monthly humor publication, The Gargoyle.

Hammond has not yet been found in the 1930 census.

The Michigan Alumnus, March 19, 1932, noted Hammond’s occupation and whereabouts: “Carl Edwin Hammond, ’21, is busy as an illustrator in Elmhurst, Illinois. His address is 251 S. York Street.” Future Don Winslow of the Navy artist, Leon A. Beroth, was a resident of Elmhurst, too.


A display of water colors of New Mexican scenery executed by Carl Hammond, son of Mrs. W. L. Hammond of 405 East Ludington avenue, is being shown in the Tudor gallery of the Chicago Woman’s club in Chicago. Mr. Hammond has lived in the southwest and his pictures are colorful and thrilling New Mexican landscapes and figure studies. “Rarely have the desert and clear air, the aspens, the pueblos, the picturesque Indians and Mexicans been as clearly envisioned and as skillfully represented as in Mr. Hammond’s sparkling water colors,” says a recent criticism in the Chicago Tribune. “They are full of dust and sunshine and charm, the cold chill of night, and the hot, sultry peace of day, both found only in the arid countries where the spell of the desert lies heavy even upon the purple hills.” (Mr. Hammond also recently showed some of his work at a Santa Fe, N. M., exhibition.

The Register of Living Alumni of Dartmouth College and the Associated Schools (1935) had a line about Hammond: “Hammond, Carl Edwin b. 284 S. Kenilworth Ave., Elmhurst, Ill.”

The same home address for Hammond was recorded in the 1940 census. He was a lodger in the Emry household which had a maid and cook. Hammond’s occupation was newspaper strip illustrator.

Hammond worked on the strip, Don Winslow of the Navy. The strip’s creator, Frank V. Martinek, explained how Beroth and Hammond became involved with the strip in Coulton Waugh’s book, The Comics (1947).


“One day two artists came into my office,” he [Martinek] writes. “Leon A. Beroth and Carl E. Hammond. Why they came, I cannot explain, but it seemed that Providence was getting us together. I asked them if they would be interested and they said ‘Yes.’ We organized. I became the creator and producer, Leon Beroth the art director, and Carl Hammond the layout and research man.”

Colonel Frank Knox, who was shortly to become Secretary of the Navy, became interested and helped sell the idea to the Bell Syndicate….

“Three years ago,” Commander Martinek wrote in 1945, “Carl Hammond, our layout and research man, went into war work, being single and within draft age. Leon Beroth and I have carried on ever since….