A Gathering of Stars for Tagalong's Birthday 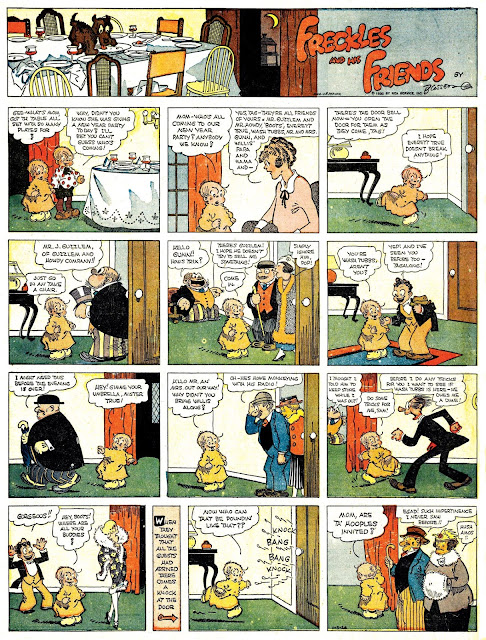 It's Tagalong's birthday in this very special Freckles and his Friends Sunday page of January 3 1926, and a galaxy of NEA stars are coming to the party. Can you name all the comic features that have sent representatives?


Thanks to Cole Johnson for the scan.

Comments:
It's the stars of the NEA basic lineup, not a real challenge to name as it's done so in the second panel. It's an interesting gag, some what of a throwback to the early sections where the syndicates were really trying hard for brand identification, building on the popularity of individual characters. You'll remember all the Pulitzer characters would gang up in special episodes, like Phyllis's Wedding, and Happy Hooligan "guest starred" in the Katzenjammer Kids so often he almost became cast member.

But this one is different, Blosser drew all the guests, some better than others. This might be the only time Everett True apeared in a Sunday page.

The date on this is for Sunday, 3 January 1926. Weren't the first NEA full pages given Saturday dates? As usual, Freckles unfailingly fails to be funny.

Do you really think they're all drawn by Blosser? I'd be impressed that he could do such credit to Wash Tubbs, Boots and the Major.

Oh, and as regards Sunday page dating. I mistyped the date on this post (since corrected). Not having my collection at hand, I can't check for early dating, but given that there were 6 dailies each week, presumably they would have dated the Sundays as Sundays. Not like they were bloody Canucks, eh?