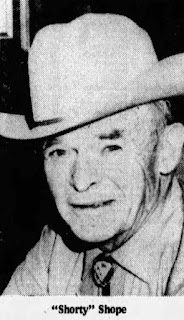 Henry Irvin “Shorty” Shope was born on May 11, 1900, in Boulder, Montana, according to Shope’s birth certificate at Ancestry.com. His parents were Ira Daniel Shope and Emily Alvis Shope.

In the 1900 U.S. Federal Census, month-old Shope was the youngest of three children. Their father was a stationery engineer. The family resided in Boulder.

According to the 1910 census, Shope was the third of seven siblings. The family resided in township six of Jefferson County, Montana. Shope’s father was a farmer.


It was there, in his formative years of 13 throughout 18, that he came under the influence of E.S. Paxson, painter of native Americans and the frontier West.

“He gave me my first lesson in anatomy and would correct and trim up my drawings, illustrated on the side of my paper and even let me watch him paint,” he later said….

His formal art education began in 1919, when he attended both Portland Art Academy and Reed College in Portland….


Shope graduated in 1932 from the University of Montana with a bachelor’s degree in fine arts. The Missoulian Sun, September 4, 1966, said Shope met artist Charles M. Russell and studied with Harvey Dunn in New York City.

Shope was mentioned in the Missoulian newspaper on September 5, 1913,
“Irvin Shope, 13 years old and a nephew of Mrs. W. W. Wickes, was operated upon for appendicitis yesterday morning at St. Patrick’s hospital.” In the May 27, 1914 issue, Shope was one of several speakers in the Roosevelt School’s declamation contest. Shope was listed as an honor student in the February 23, 1917 Missoulian. Shope was a guest at the Christmas party hosted at the Wickes home.

Farmer Shope signed his World War I draft card on September 12, 1918. His address was 425 West 5th Street in Missoula. His description was short, medium build with blue eyes and light brown hair.

The 1920 census said Fargo, North Dakota was Shope’s home at 1043 Tenth Street North. The head of the household was his widow mother’s brother-in-law, Carl Greenwood. Shope was unemployed.

The 1930 census listed Shope, his mother and three brothers in Missoula, Montana at 425 South Fifth Street West. Shope was a self-employed artist.

The 1940 census recorded Shope, his wife and three daughters in Helena, Montana at 1337 9th Avenue. The advertising artist worked for the Montana Highway Department. In 1935 Shope lived in Los Angeles, California.

During World War II Shope registered with the draft on February 16, 1942. The Helena resident was employed at the Montana Highway Department.

The Missoulian Sun, September 4, 1966, said several paintings by Shope were to be exhibited at the Cowboy Hall of Fame. Shope was a member of the Cowboy Artists of America, Inc. Shope had three dioramas at the Charles M. Russell Historical Society Museum in Helena. Shope “painted many portraits of Indians, mainly from the Blackfeet tribe in Browning who adopted him as a ‘blood-brother’ in 1937 and gave him the name ‘Wolf Bull.’”

Shope passed away November 22, 1977, in Burlington, Massachusetts. The Great Falls Tribune said Shope and his wife were visiting their daughter when he suffered a stroke. He was laid to rest at Boulder Cemetery.