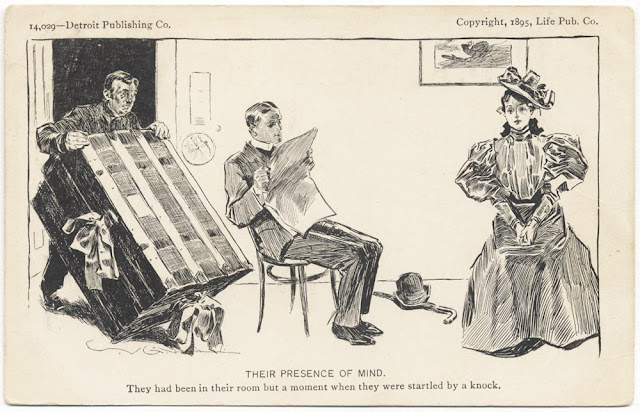 Here's another card from the Detroit Publishing Company's Gibson series, this one number 14029. This drawing originally ran in Life in 1895, and I cannot fathom why they would have resurrected it for this card. The composition is awkward, and the man and woman seem not to be quite perfectly tethered to the ground. The gag, unless I'm missing something, is not put across well at all (I guess the two were smooching before the man with the trunk arrived?).

This card, like my other Gibsons, is unused. It has an undivided back, placing it pre-1907.

Comments:
Looks to me like an illustration for a story, not a gag cartoon per se. I do recall a Gibson cartoon showing two sweeties on a couch, and you can tell from the crushed puffed sleeve on the lady that they had been candoodling close just a second or two before the scene. Here, the clothes are not deranged. The trunk seems like it's poorly packed.

This is a freestanding cartoon, and that's the original caption. The couple are newlyweds almost caught in the act; hence the awkward, hastily assumed postures.

Clothes are not deranged, but the bride's hat and hair are out of kilter and she looks a bit rattled. The elegant groom dropped hat and cane on the floor; their position suggests some action between the two chairs. The newspaper is an odd touch; wonder if Gibson meant us to think the man is oh so casually covering his naughty bits.

Hints that they're newlyweds: "Their room" has a sign by the door, implying a hotel. Those are big limp bows decorating the trunk, perhaps indicating that it and the couple came straight from the wedding venue.