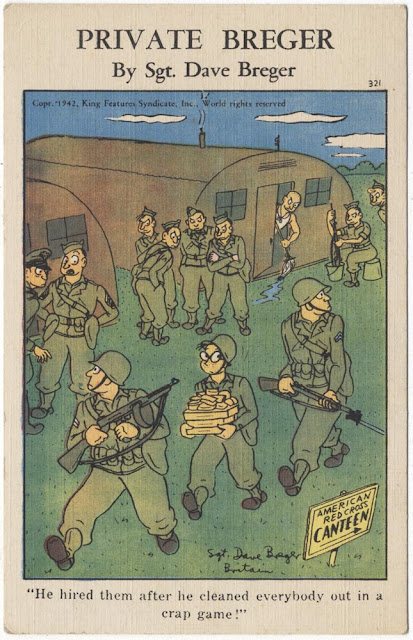 This 1942 card features Private Breger, the character created by Dave Breger which originally saw print in the Saturday Evening Post in 1941. It immediately caught on and migrated to the Stars & Stripes and into mainstream civilian newspapers.  After the war  the panel was renamed Mr. Breger and ran until 1970.

This card series was produced by the Graycraft Card Company of Danville Virginia. As with many of the postcards that were produced for use by GIs, these cards seem to be most often found in an unused state. The bonanza envisioned by these postcard companies seems to have been a bust.

------------------------------
I don't know why but when I was actively collecting cards, it seemed there were always a large stock of unused cards of all kinds with wartime gags. It's as if publishers regularly over printed them, the stocks outlasted the war, and like most old cards, they never got chucked. There's some of my old blog entries listed above about Breger.
I loved that panel when I was a kid, he died suddenly 49 years ago, in January 1970, the series following suit a few weeks later. Years on, when I worked for King Features, I was able to peruse his old files, and I realized that although he had really great, far-out gags sometimes, he was amazingly lazy, repeating the same stock of gags over and over, sometimes redrawing the same ones in the same order a dozen years later.