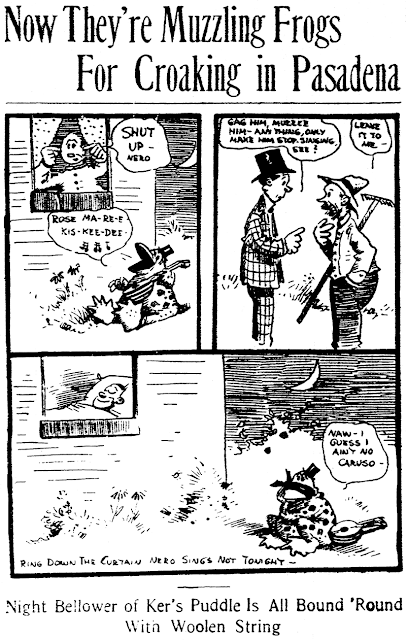 James F. Ker has decided that a frog inhabiting the decorative pond in his front yard has awakened him once too often with his incessant croaking. The well-to-do Mr. Ker, who is president of the Chamber of Commerce Building Company, orders his gardener not to kill the frog, for he is of tender disposition, but merely to keep him from his nightly songfest.

According to the article writer, the gardener caught the frog and muzzled him. This was accomplished by doing a little operation in which the frog's mouth was sewn up with string so that it could only open wide enough to allow him to eat, but not croak. Supposedly this effected the intended solution.

Imagine the consternation of the Pulitzer committee that this story was not bylined.

(That's a question that comes up in my mind a lot when reading Herriman cartoons.)

Gosh, I just assumed it was the old song "Rose Marie", but I see that wasn't written until much later. So good question!

There's a 1908 "Rose Marie" by Gardenier & di Capua done in truly horrible Italian dialect that might be it. Doesn't have "Kiss-Kee-Dee" in the lyrics, but maybe frogs can't read any better than they can sing.

Herriman really loved that "kiss-kee-dee" line. In Krazy Kat he named one of his French characters "Mr. Kiss-ki-de ku-ku".