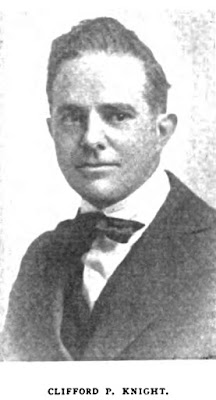 Clifford Burnham “Cliff” Knight was born April 12, 1885, in Norwalk, Connecticut. Knight’s full name and birth date were on his world War I draft card. The Bridgeport Post (Connecticut), December 24, 1957, said he was a Norwalk native.

1900 U.S. Federal Census recorded Knight as the youngest of two sons born to Charles, a farmer, and Emily. The family, which included Knight’s paternal grandmother, resided in Vernon, Connecticut.

At some point Knight moved. In the 1910 census, Knight was a resident of Akron, Ohio. The newspaper cartoonist was a lodger at 30 Elinore Court. One of Knight’s cartoons was reprinted The Labor Digest, April 1914.

Cartoons Magazine, June 1915, said Knight was a cartoonist with the Hartford Post in Connecticut.

The Editor & Publisher, December 8, 1917, told how Knight broke into the newspaper business.


He was named Clifford Burnham Knight, but even with this handicap lived and finally decided he would have to earn a living if he didn’t want to break his habit of eating three times a day. He went to Akron, O., where City Editor “Bill,” Weygandt, of the Beacon Journal, gave him his first cartoon job. He covered the office with chalk dust while he dug out likenesses of prominent rubber magnates on the Hoke plates, which he unloaded himself. Finally, he decided he was losing about $2,000 a month and Cleveland was losing the services of a future Satterfield. So one day he sewed $8 inside his vest and visited the Sixth City, where he found an uncertain sort of job on the Leader, which then existed by the grace of Dan Hanna. Later, he went to Hartford, Conn., and has been employed as chalk-plate cartoonist, by the Post, and more recently with the Hartford Courant….

Knight lived in Manhattan, New York City when he signed his World War I draft card on September 12, 1918. Knight lived at 118 West 44th Street while his wife, Lelah Katherine Knight, was in Kent, Ohio. The date of their marriage is not known. Knight was an artist and editor employed by R.H. McCready. Knight was described as medium height, slender build with grown eyes and hair.

Newspaper cartoonist Knight was single when the 1920 census was enumerated. He resided in Manhattan at 65 West 48th Street.

The Mixer and Server, August 15, 1921, reprinted an item from the Hartford Courant, “Mr. and Mrs. Clifford Burnham Knight, of New York, who were recently married, have returned to New York after a short stay in this city. Mrs. Knight was Miss Daphne E. Keeney, one of the builders of the original Brooklyn Bridge and other important edifices.”

News of the birth of Knight’s son was published in the Fourth Estate, February 27, 1926, “A son has been born to Mr. and Mrs. Clifford Burnham Knight. Mr. Knight is cartoonist on the Bridgeport, Ct., Evening Star. He was formerly an artist with New York papers, including the Evening Mail before it was absorbed by Munsey interests.”

According to the 1930 census, Knight, his wife and son made their home in Vernon, Connecticut.

American Newspaper Comics (2012) said Knight drew Happy Days and Whoopee Days for the Graphic Syndicate in 1930. Knight trademarked the series as recorded in the Official Gazette of the United States Patent Office, June 17, 1930.


For Comic Cartoon Strip for Newspaper and Magazine Publication.
Claims use since Nov. 25, 1928.

In the 1940 census, Knight said he was a freelance writer whose highest level of education was the eighth grade. His Vernon, Connecticut house was valued at ten-thousand dollars and the home for his wife and children, Clifford and Patricia. 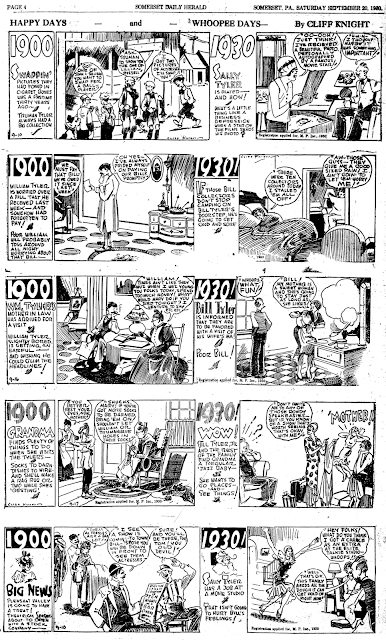 Knight passed away December 23, 1957, in Boston, Massachusetts. His death was reported the next day in the Bridgeport Post.


Hartford—Dec. 24 (AP)—Clifford Burnham Knight, 72, outdoor writer and copy reader for the Hartford Courant, died yesterday in Peter Bent Brigham hospital, Boston. Mr. Knight, also a cartoonist, suffered a ruptured thoracic artery last week, and was transferred to the Boston hospital when a kidney condition developed after he had been in Hartford hospital several days. Mr. Knight, who began his newspaper career as a cartoonist on the Akron (Ohio) Beacon at the age of 20, had been a member of the Courant staff since 1945. His home was in Rockville. A native of Norwalk, he worked on the New York Evening Mail, the now defunct New York Graphic, New Haven Times-Union and the Bridgeport Times-Star and The Hartford Times before joining the staff of the Courant in 1945. Mr. Knight leaves his widow, Mrs. Daphne E. Knight, a daughter and son, and three grandchildren. Funeral arrangements are incomplete.

Knight was laid to rest in Vernon, Connecticut.