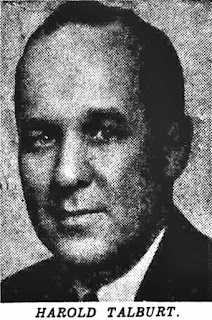 Harold Morton Talburt was born on February 19, 1895 in Toledo, Ohio according to his World War II draft card which also had his full name.

In the 1900 U.S. Federal Census, Talbert was the younger of two sons born to Katie, a widow. Also living with them were a “brother-in-law”, William Talburt who repaired watches, and a servant. They were at 434 Raymer Street in Toledo.

The 1910 census said Talburt’s mother married William, now a jeweler. The family of four were Toledo residents at 733 Norwood Avenue.

A profile at the Syracuse University Library said Talburt was “the high school correspondent for the Toledo Times and in 1916 was a reporter at the Toledo News-Bee.”

On June 5, 1917, Talburt signed his World War I draft card. The cartoonist worked for the News-Bee and resided at 2020 Calumet Avenue in Toledo. He claimed his mother as a dependent. Talburt was described as short and slender with blue eyes and black hair.

In 1920 Talburt and his brother, Clarence, lived with their mother, a widow again, in Toledo at 2020 Calumet Avenue. Clarence worked at the post office while Talburt cartooned at a printing office.

Syracuse University Library said Talburt was hired, in 1921, to cartoon at the Scripps-Howard news bureau in Washington, D.C.

According to the 1930 census, Washington, D.C. was Talburt’s home. The newspaper cartoonist and his wife lived at 401 Connecticut Avenue.

Talburt was at the Washington Daily News when he won a Pulitzer Prize for his 1933 cartoon, “The Light of Asia”.

The 1940 census recorded Talburt, his wife and two children in Montgomery, Maryland at 100 Kennedy Drive. His highest level of education was four years of high school. In 1939 he earned over five-thousand dollars.

Talburt’s address was same on his World War II draft card which was signed on April 27, 1942. He was employed by the Scripps-Howard Newspaper. His description was five feet four inches and 135 pounds.

The Evening Star (Washington, DC), December 15, 1946, reported Talburt’s election as president of the Gridiron Club for 1947.

Talburt passed away October 22, 1966 at his home in Kenwood, Maryland, according to The New York Times. The paper said his first wife passed away in 1944. Talburt was a member of the National Press Club and the White House Correspondents Association. He retired in 1963.