It's time for another round of Heritage auctions of my collection. Due to my move I have been pretty well forced to substantially prune my collection (or establish a trucking service between Florida and Nova Scotia!).

This time it is almost all original art, with a lot of unusual and rare items that you won't see up for sale anywhere else. In addition to American comic strip, editorial and illustration art, there's going to be quite a bit of European work as well. Most of that was collected by Jim Ivey direct from the artists when he made his landmark research trip there in 1959-60. If you're into European artists, the coming weeks will offer you some items I know very little about in many instances, and the guys at Heritage often couldn't supply additional info. So maybe you'll find a hidden gem.

Here's what's up for bid this week (auctions ending Sunday). These auctions aren't tagged with my name, so follow the links provided here to view them: 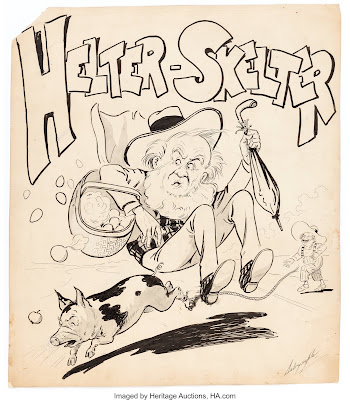 Wacky cover cartoon to a Puck's Library issue of the 1890s by Louis Dalrymple. Little knick of board off the upper left which doesn't affect the image. Nice large piece, perfect for framing. 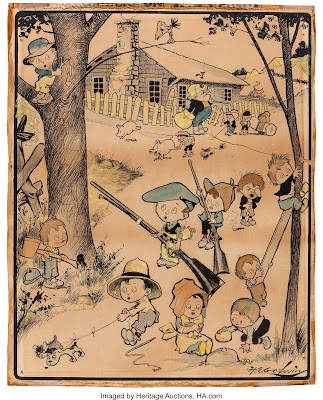 Superb colored illustration by cartoonist Harry E. Godwin ran as a magazine page in a 1904 Philadelphia Inquirer Sunday. Beautiful large piece with nice coloring. Although the Heritage description says it is in lesser condition, trust me that it displays beautifully. Was up on my den wall for many years. Where you gonna find another Harry Godwin piece? 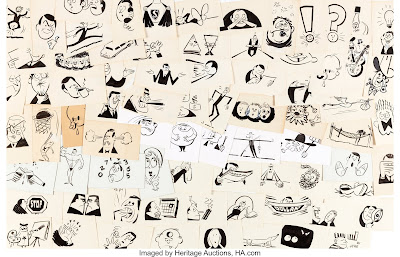 A huge collection of dingbat cartoons by famed editorial cartoonist Jim Ivey. Ivey really outdid himself on these small cartoons in my opinion. He has a gift for simplifying his subjects down to a mere few lines, which is what afforded him quite a bit of fame in the old grease crayon days of political cartooning. If you are the high bidder, message me and I'll tell you the story behind the creation of these dingbat cartoons. It's kind of interesting. 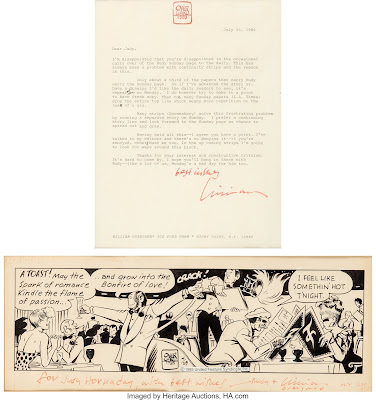 A delicious Rudy daily comic strip by William Overgard, with accompanying long and interesting letter from the artist. You all know how I love Overgard's Rudy, so I'll refrain from gushing. I supplied this to Heritage in a beautiful matte and frame, but I don't see that mentioned, so I guess they removed it.  Grumble, grumble. 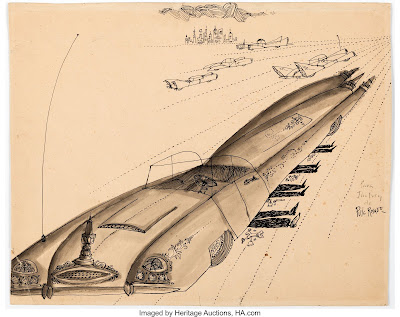 Here's a very funny cartoon by European cartoonist Puig Rosado. I don't know anything about the man, but he certainly captured the 1950s American predilection for giant tail-finned cars. Note that it takes no less than four mechanics to keep this hulking beast running!  A classic car enthusiast or car mechanic would go ape for this cartoon. Note that the cartoonist inscribed it to Jim Ivey, so it dates to 1959-60. 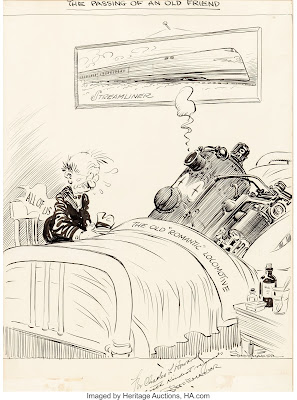 Vaughn Shoemaker, famed two-time Puliter winning editorial cartoonist offers a cartoon that transcends day-to-day politics. This classic piece laments the demise of the old "romantic" locomotive in favor of streamlined art deco bullet trains. This very large cartoon looks like a million bucks, and imagine how a railroad enthusiast would love to display this on their wall. Shoemaker art doesn't often come up for sale in my experience. (By the way, this comes from a collection I purchased of railroad-themed cartoons, so be on the lookout for more neat train stuff in coming auctions).

That's it for this week's auction, but stay tuned for more. And please remember that if you enjoy Stripper's Guide, feel free to bid a little extra as a thank you for the blog. Hey, I'm not proud!