On an old blog post about World Color Printing a new comment recently showed up from Bob Harris. Harris mentions that WCP did a short-lived special section called the Invisible Color Book. I vaguely recalled seeing a few of those and thinking that I needed to look into their story a little farther. This message gave me the kick in the pants to get that done.

Here's the Invisible Color Book idea: you open your Sunday paper to find a seemingly black and white tabloid section filled with drawings. According to the instructions, if you apply water to the paper it will bloom forth in four color splendor. Is it the most earth-shattering idea to come around the pike? No. Inks that require activation to appear had been used for newspaper stunt pieces before this. What's new here, I think, is that the concept works with the full four color palette (I think earlier versions were a single color of 'invisible ink') and the idea of doing a weekly kid's section composed this way was something new.

A description of the process makes it just seem like it is making the reader work to get what could just as well have been printed in normal inks. But kids don't think like adults. Imagine a kid wetting a brush and pretending that they are a great artist, beautifully and masterfully coloring those black and white pictures. Okay, maybe it's not going to replace Nintendo, but in the 1920s kids were a little easier to please. I can definitely see them getting a kick out of it.

Before the Invisible Color Book debuted in 1922, Imhof had already marketed his innovation in a different venue. Very shortly after the patent date, various bread companies began advertising that they were including an Invisible Color print in each loaf of their bread. It seems like a nice promo, and quite a few local bread companies bit on it, but they also seemed to tire of it quickly. By 1922 the ads for this promo were already petering out.

Maybe World Color Printing had done the production work on those bread promos, maybe not. But they were evidently interested in exploiting the technology. On March 26 1922, WCP in association with Invisible Color Print Corp. debuted the Invisible Color Book in a very healthy number of prominent newspapers following a blizzard of promos the week before.

Unfortunately, the material chosen for the new section was a collection of mostly storybook-type illustrations, none of them drawn particularly well, and there really wasn't anything innovative at all done with the invisible ink process. Look at picture in black ink, give it a watering, look at it in color. Kinda ho hum. Here's all eight pages of the first issue: 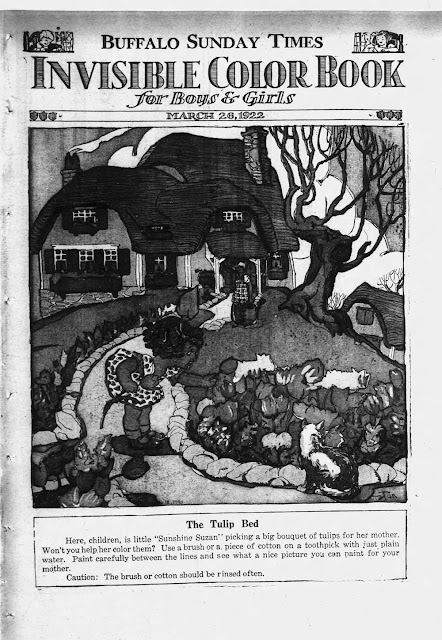 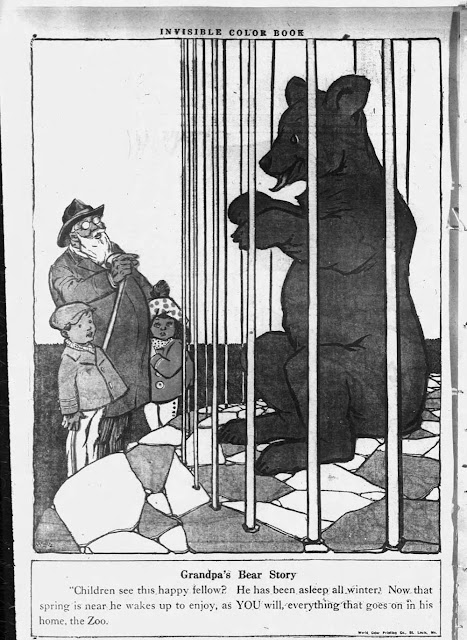 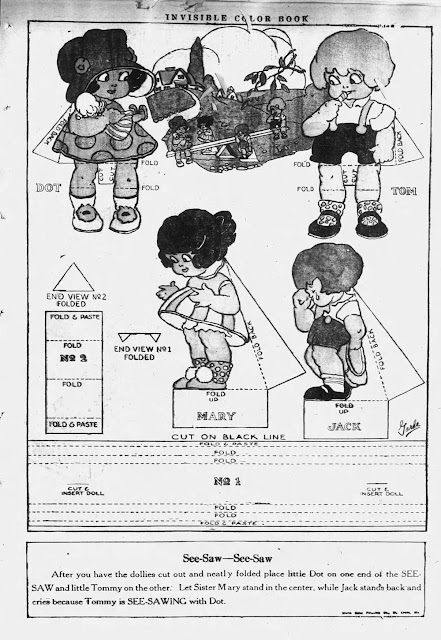 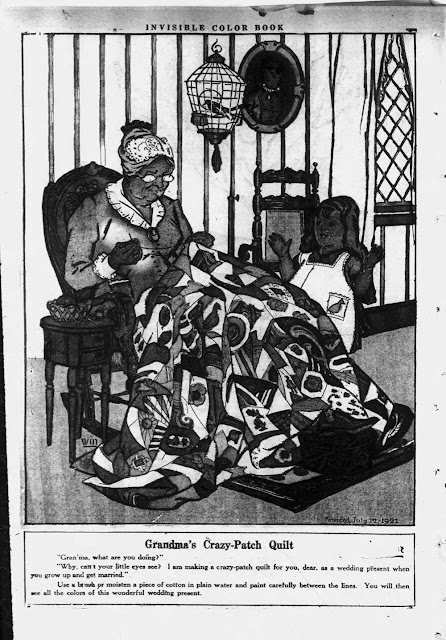 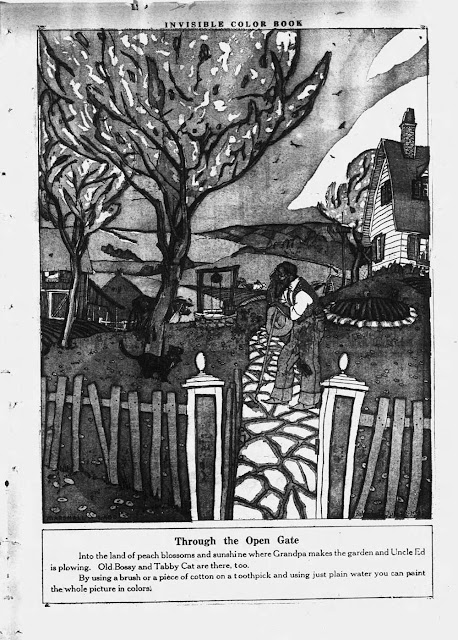 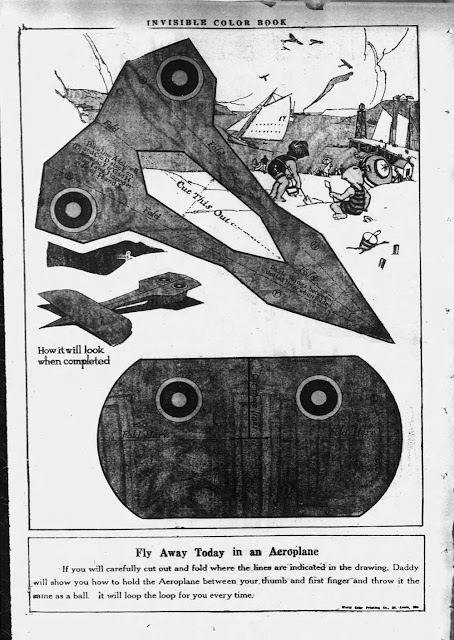 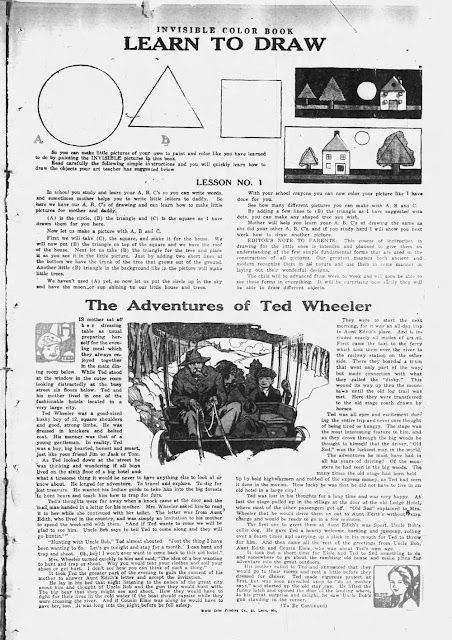 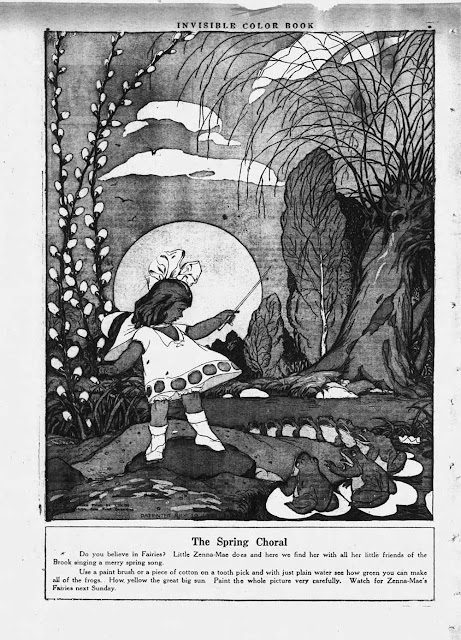 It seems very odd to me that World Color Printing didn't call on any of their regular cartoonists to jazz this thing up. Imagine what fun it would be to have a Slim Jim strip in which revealing the colors is an integral part of the story!

The artists used by the Invisible Color Book mostly seemed embarrassed to be there for some reason. Many illustrations were unsigned, and many others offer inscrutable monikers --- Bob H., Win, Tan and Peggie for instance would do quite a bit of the work. Then there is this interesting pair of contributor names: Marshall Ladd and Ladd F. Morse. Who knows what that pair of pseudonyms was trying to hide. The only likely non-pseudonym I find is Garde, who I assume is Chester I. Garde. Even he started trying to hide after a few months, changing his signature to look like 'Gordie'.

As the weeks went by, the section only looked more slipshod and dashed off. No innovations, just more fairytale scenes and paper doll cutouts. (By the way, paper dolls seem like a very odd choice for an activity considering that kids have to get the paper wet -- you want them to cut out those damp wrinkly things?) In less that six months most of those big newspaper clients had soured on the Invisible Color Book and cancelled it. Obviously the section needed to be revamped to save it. We'll cover that tomorrow. See you then!

Comments:
A promo for the book, when it ran in Utica, NY (Utica Observer-Dispatch, 1 August 1922) has a drawing of a boy and girl watchiing a mob of clowns and funny animals approaching them, drawn, and signed by Lyman Young. Can we assume he might have been one of the contributors to the book itself?

I haven't seen that promo, but I've looked through all issues of the Invisible Color Book and did not find his signature. --Allan