Yesterday we left you on a cliffhanger. What could possibly save the Invisible Color Book, a World Color Printing production that was crashing and burning. Newspapers were cancelling it right and left. What .... would ..... they  ..... DO!!!!!!

Well, the answer is not a whole hell of a lot.

Okay, to remind you of what was in the earlier sections (or ya could just scroll down to look at yesterday's post) it was all fairy tale illustrations, a few paper dolls, and a text story (what a great use for invisible color that is!). With the installment of September 24 1922, however, they inaugurated a new line-up. That included:

* a revival of the old Annabelle paper doll feature from the WCP Sunday sections. This paper doll series had last seen print in 1916, but the character was dusted off and put under the leadership of Garde, aka Gordie, aka Gardie. He did a perfectly creditable job, but recall my previously voiced concerns over making paper dolls out of damp wrinkled newspaper.

* Ladd F. Morse started a series about some little munchkins called The Danny Dees. The poetry was bad, but the pictures were well done.

* an untitled series of full-page comic strips would tell a fairy tale or fable each week. Reducing Alice in Wonderland and Robinson Crusoe to a six panel comic strip may seem just a tad overreaching, but at least they tried. Art on this feature was often unsigned, but Bob H. and Peggie did own up to quite a few of the episodes.

* the next two additions were both from the Boston Globe. Why WCP couldn't dip into their own vast inventory I can't imagine, but considering that the Globe was a subscribing paper, maybe they got these on the cheapsie. They added large four panel comic strips of Billy the Boy Artist by Ed Payne and Fatty Spilliker by George H. Blair (the latter was a latecomer, starting in the October 15 issue).

* the final addition was an activity page, also loosely based on a Boston Globe feature. The Globe had a Sunday feature titled The Bingville Bugle, a spoof newspaper that reported the goings-on in a rusticated podunk town. "Marshall Ladd" offered very well-drawn views of various venues in that town (the general store, the sheriff's office, and so on), and each picture held mysteries to be solved, like hidden pictures or 25 items that begin with the letter G. I've not encountered this feature in the Boston Globe itself, so why the Invisible Color Book used it as a backdrop for the feature is a bit of a mystery in itself.

Here's the complete first issue after the big revamp: 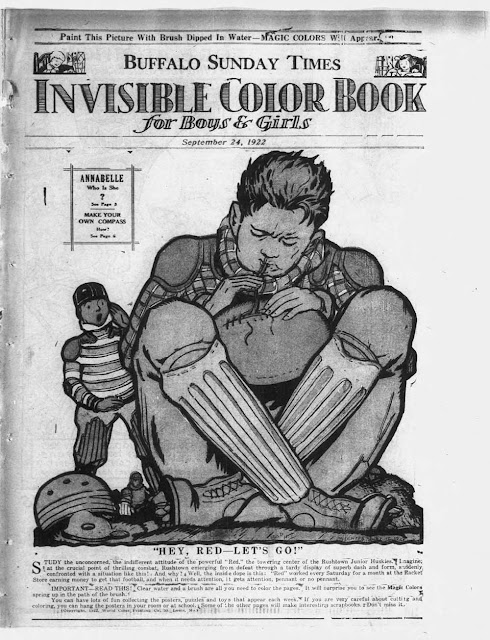 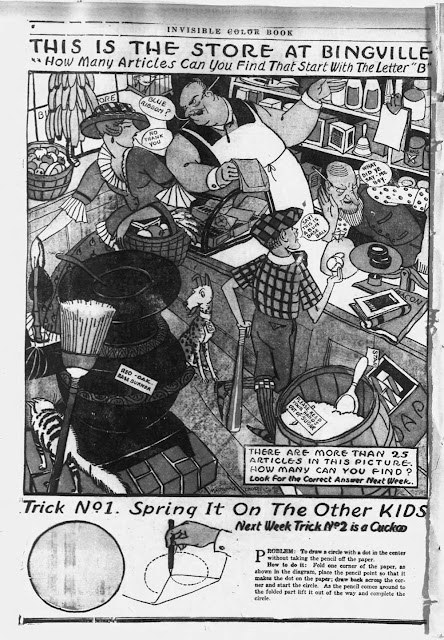 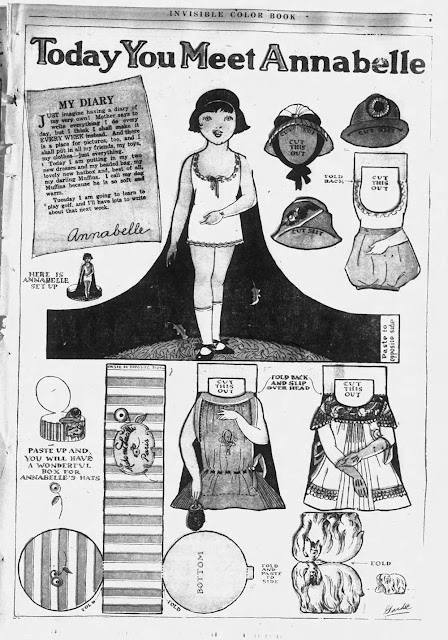 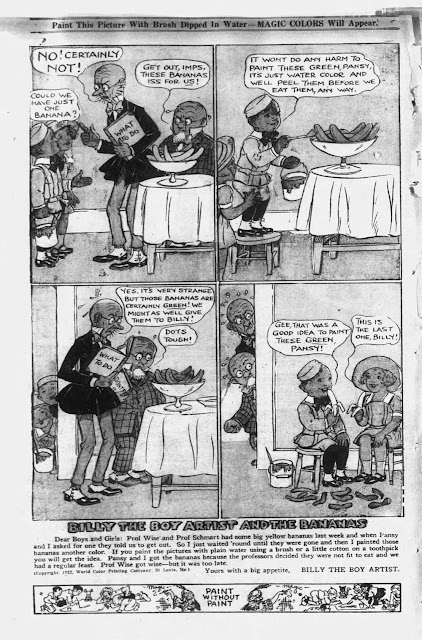 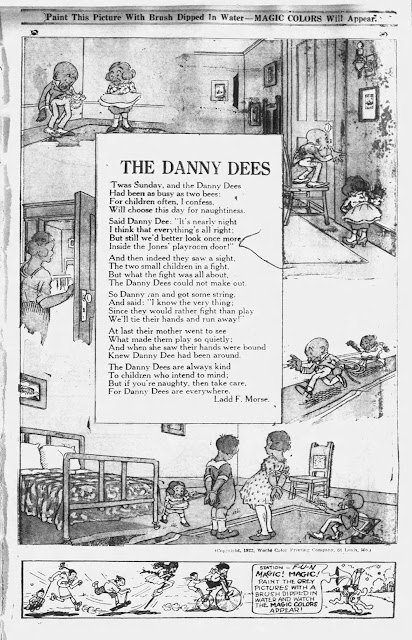 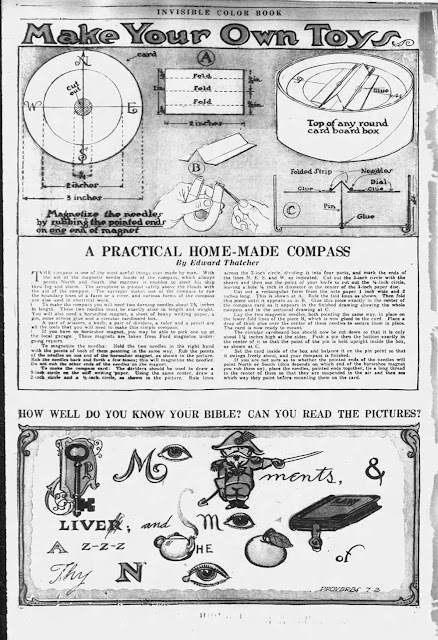 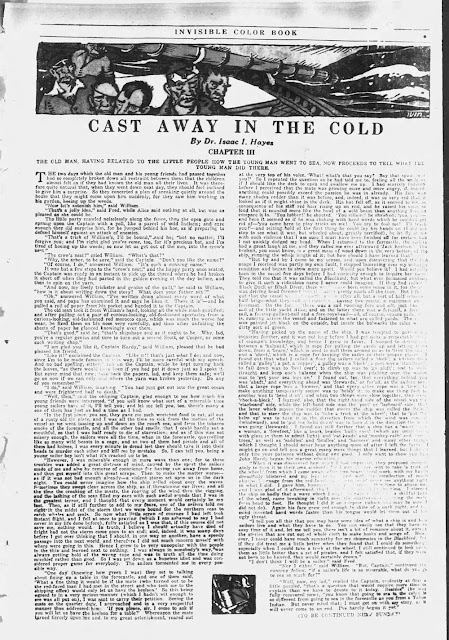 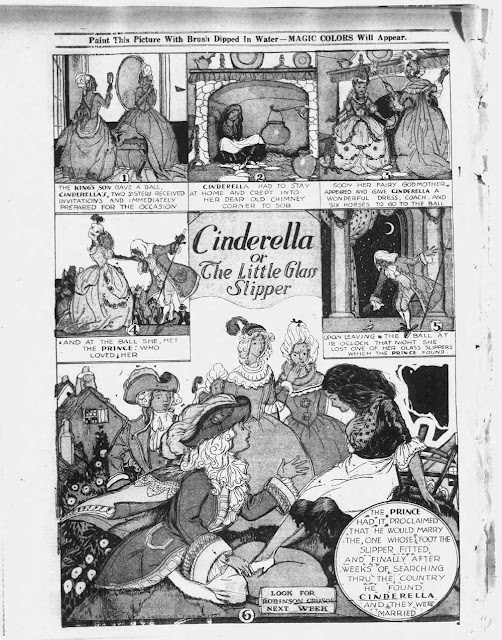 With the revamp I'm still flabbergasted that it never seemed to occur to these folks to make some really creative use of the invisible color process. Howzabout a feature where the text is all hidden, and you have to wet it to find out what the characters say? How about a puzzle feature that depends on the locations of colored objects? This isn't that hard fellas!

Well, for them evidently it was too hard. But at least they'd revamped the section to offer some semblance of entertainment, some small payoff to linger after the joy of wetting newsprint has worn off.

The Danny Dees lasted only three weeks and was replaced by Fatty Spilliker. The rest of the features ran through to what seems to be the end of the secton on April 1 1923. Online I can only find one paper, the Buffalo Times, that soldiered on to the end. Even the Boston Globe, sire of three features in the section, only ran two pages of the section at the end -- their two strips.

That was the end of the Invisible Color Book. The Invisible Color Print Corporation went back to using the invention primarily for store promotions and contests, like the one below, but these mentions peter out in newspapers after about 1926.

* Who is this Bob H. who did a lot of work for the section? Only cartoonist fitting that name I can come up with is Robert (Bob) Hines, and he's too young. There's also Robert N. Holcomb, but I have no biographical data on him to make this even guess-worthy.

* Is Garde / Gardie / Gordie really Chester I. Garde? I have my doubts. Although this  cartoonist does pop up in unusual places, he never seemed modest about giving his name, and never used a signature anything like the one used in this section.

* "Marshall Ladd" has a lovely style, and you'd think the artist would be proud enough of his work in the section to offer his real name. But I can't find anything written about him, and there's also this "Ladd F. Morse" person in the section, making me think we've got one guy who's just throwing around nonsense names. Anyone heard of him? Before anyone throws out the name "Wesley Morse", I have to put in my art-spotting two cents that I don't think Mr. Morse could have created those lovely Bingville pages.

Comments:
I am burning with curiosity to know what a colored page using this system looked like. The results on the water-activated coloring books we bought the kids 20 years ago were pretty bad...plus the colored spots were visible as large dots on the page before water was applied.

Young Harry Lillis Crosby in Spokane was a fan of THE BINGVILLE BUGLE, so much so that his nickname soon became Bing!

Hi Smurfswacker -- Try searching for "invisible color" under Collectibles on eBay. Several of the bread promo cards are there right now, some have evidently been 'painted'. The color looks pretty good. Harder to find would be ones that definitely were not painted. Even those on eBay that don't have vibrant colors do still seem to be tinted.