Heritage Auction Items from my Collection

Last week Heritage almost literally gave away some of my art collection. I'm still stifling sobs. Hopefully some folks will bid this week with something more than the contents of their change purse. This week Heritage has another batch of beautiful and interesting items, all of which can be seen at the Heritage site by clicking here. 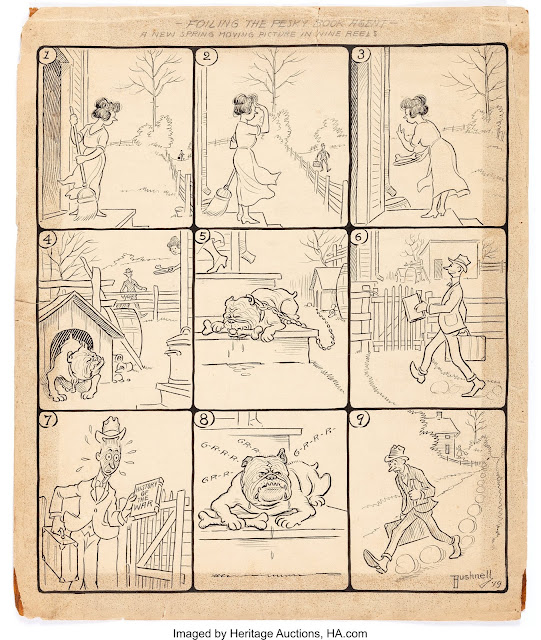 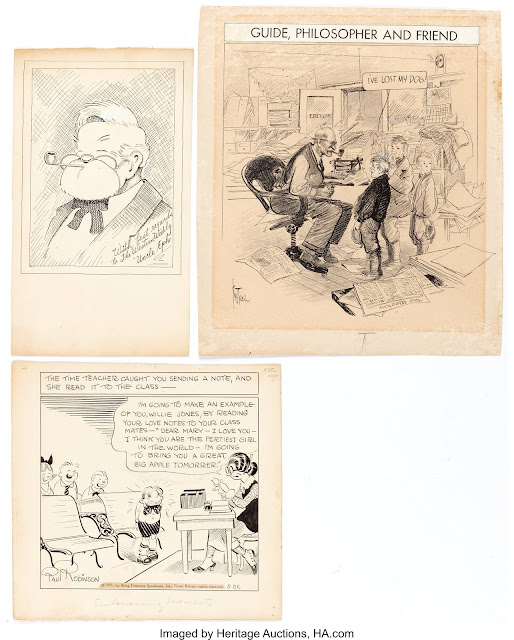 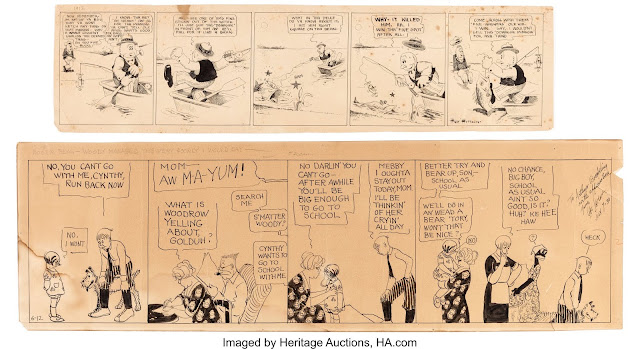 This lot of six originals all thrown together makes my heart heavy, but if there are discerning comics lovers out there, hopefully it won't all crash and burn. First we have a wonderful funny piece by E.A. Bushnell, an accomplished editorial cartoonist who sometimes jumped over into the realm of humor. This 1919 piece chronicles the hard life of the travelling salesman.

Next is a special drawing of Uncle Eph by Oscar Hitt. What is amazing about this piece is that it was done for the fabled Wheeler-Nicholson Syndicate in 1926 during their brief existence. Only piece of Wheeler-Nicholson art I think I've ever seen. Yep, this is the Major Nicholson who went on to found DC Comics.

Next is a beautiful piece by Magnus Kettner, a real tear-jerker that almost certainly was done for either Editor & Publisher or The Fourth Estate and pays homage to the editor of a small-town paper. Very displayable if you are a newspaper lover.

Next we have a rare surviving example of Paul Robinson (famed for Etta Kett) during his very very brief time on Embarrassing Moments, the King Features panel in which many elite cartoonists toiled -- George Herriman, Billy DeBeck, Jay Irving and more. Earliest Paul Robinson you're ever likely to find.

Next we have an early and obscure comic strip rarity from 1912-- Amos Roach by Andy Hettinger. The history on this strip is hard to pin down, but it definitely ran in the Cleveland Plain Dealer in 1913.

What am I bid for this series of treasures? A whopping $12 as of Wednesday. Shoot me now. 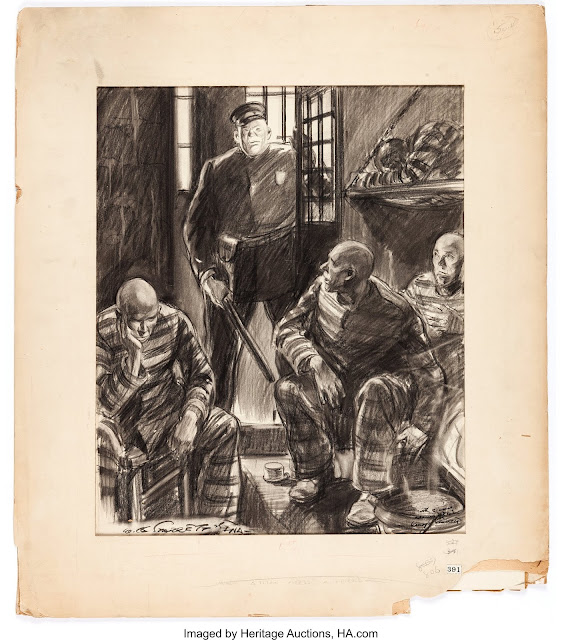 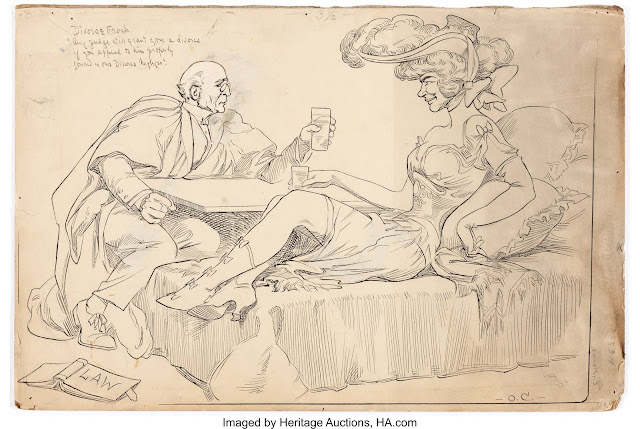 These Heritage people are killing me. Selling one lot with both an Otho Cushing and a Kemp Starrett original? This one really slays me, especially when I watch people on Heritage bidding hundreds of dollars for a 'slabbed' copy of Marvel Two-In-One number who-gives-a-crap or for an X-rated convention sketch of Aunt May. 'Tis a strange world.

Anyway, if you don't know who Kemp Starrett and Otho Cushing are, well, just look at the art. There is literally not a single bid on this lot as of Wednesday, and so obviously the world has gone mad. 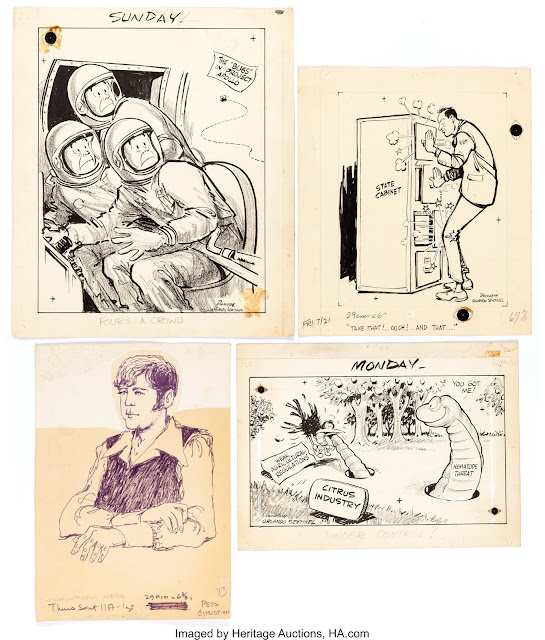 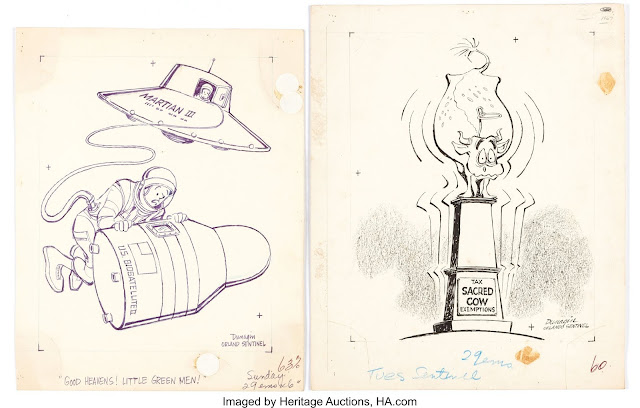 Okay, I.m not going to freak out about this lot of art by Ralph Dunagin. Yes, it includes two nice  space exploration editorial pieces, and yes, if you're into murderers, then the courtroom sketch of the Black Satin Killer (complete with tattooed words on his fingers), are pretty freaking cool. But surely not worth more than a buck, which is the current bid. 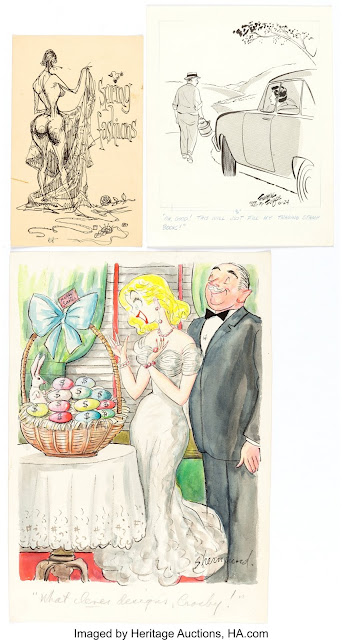 Obviously the main attraction in this lot is the lovely Barbara Shermund color piece, and that's just as it should be, but don't ignore the Franklin Folger The Girls panel, showcasing some brilliant zipatone work along with sensitive portraits of his husband and wife subjects. The sleeper here is a fun piece by Bill Thomas, who was an artist with the San Francisco Examiner at the time. Ostensibly his drawing is a headpiece for a ladies fashion column, but you can rest assured this never made it into the paper, what with that conspicuously bulbous bare ass. No, this was a gag piece that he gave to Jim Ivey back in the early 60s when both were in the bullpen there. The drawing, though, is of amazingly high quality considering it was just made to break up the monotony in the art department. 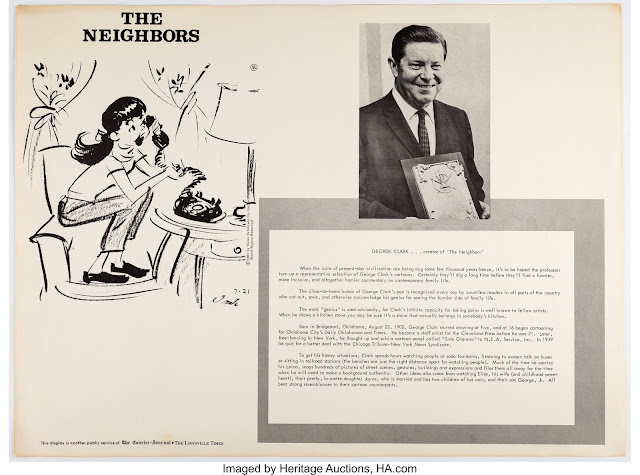 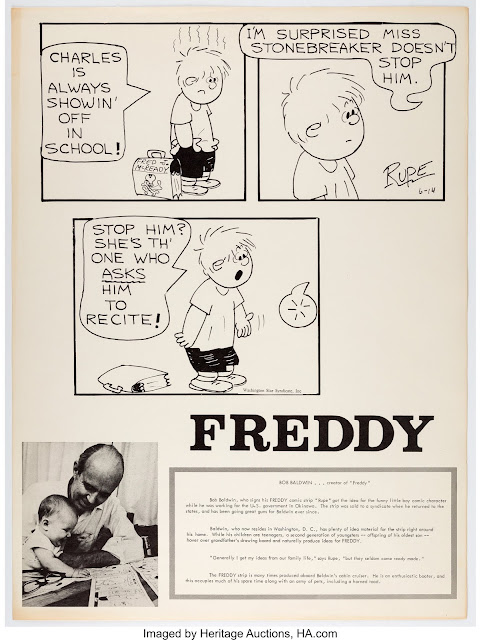 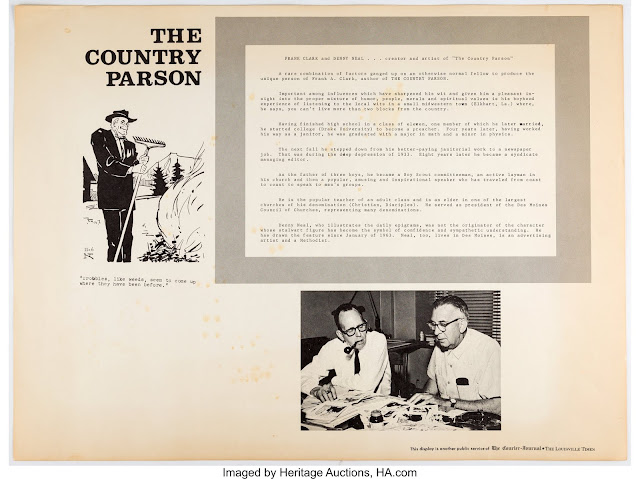 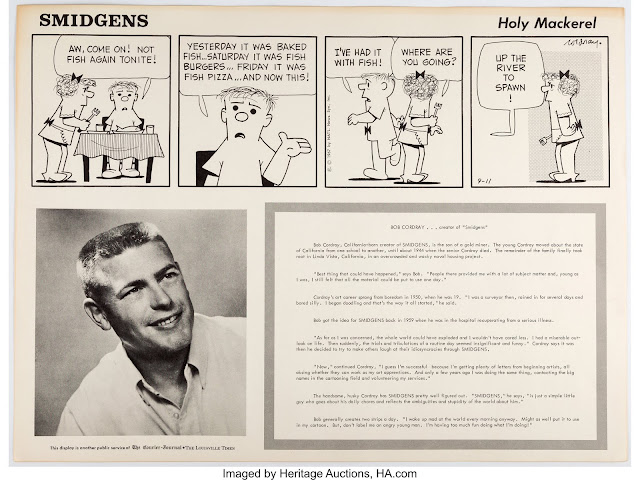 Here are a set of four promotional posters put out by the Louisville Courier-Journal to advertise their comic strips. They are odd posters, I admit. They're black and white and they have a lot of small print. When I bought these the seller claimed thy were meant for those overhead advertising spaces on buses, but I just don't think I buy it. Any guesses as to the intended use of these impressive though curiously bargain-basement class posters? If you're a fan of Freddy, Smidgens, The Neighbors or The Country Parson, and who doesn't fall into one of those camps (he said with a snicker), you just can't live without these.