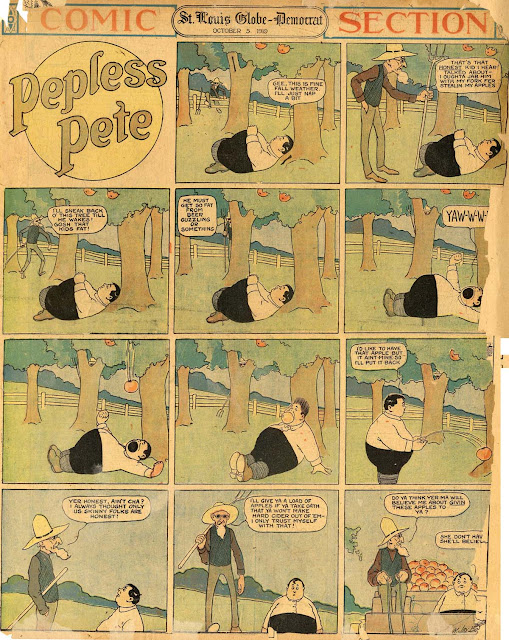 Here is a mystery strip from the collection of Cole Johnson. This tearsheet of Pepless Pete ran on October 5 1919 in the St. Louis Globe-Democrat. Cole told me he had no idea if it was a series, but that he'd never seen another. As far as I know, the G-D is not available digitally, so unless someone happens to have more material in their collection, someone needs to go old-school and get to a library that has the paper on microfilm if we're going to solve this mystery.

Although the strip is signed, it is obscured by a combination of flaky newsprint and archival tape. To me it looks like "K. Jay B-----". Anyone?

Comments:
There is a microfilm run of the Globe-Democrat. Cole would borrow reels via interlibrary loan, while trying to complete his Philadelphia Inquirer project. (the G-D was a reliable client for years, and sometimes ran the Inky's fifth page that they themselves didn't.) He stopped bothering with them when the microfilmers perversely stopped capturing the comics, though they were evidently in the volumes used. That obtained for the final years of the Inquirer's full section offerings, about 1914-5. At that time, The G-D switched to a NY Herald section and maybe 1917 or 1918 started knocking out a page so they could feature their own home made stuff, like ol' Pepless here.
If anyone wants to give it a shot, by this time, they may have started to include the comics again in the microfiles.
About the condition of the page: This was once the property of the St.Louis Public Library. There, in the late 1930's, A new idea in unneeded, useless make-work projects was launched by the WPA; do something with the hundreds of years of newspapers in big volumes in public library stacks. What they proceeded to do was disbind the runs of the Post-Dispatch and the Globe-Democrat, the two leading papers of that day. They then covered each page, front and back, with a weird, very thin white gauzey fabric, pasted on. It left them opaque, and presumably useless, though a strip of new paper was glued to the edge, presumably for a re-binding project later.
But that never happened, perhaps they realized just how nuts the whole fiasco was, or the taxpayer's money was suddenly spent sensibly. But this fiasco left behind hundreds upon hundreds of large boxes of these strangely done pages, filed away in some kind of madman's obsessive order; 32 pages of second sports pages from 1909, 77 pages of magazine section back covers, 1921, 46 third want ad pages, 1917, 10 pages of page 9, 1901, etc.
They were all just warehoused until the 1970's, when Cole and I had a look. Some comics, here and there could be found, But you'd have to have unlimited amounts of time, body strength and patience to sift through the whole lot. A few pages were extracted, but then the removing of the cruddy covering was sometimes impossible to rub off (and I'm talking half an inch at a time)and it seemed to suck all the moisture out to the paper as well, making them as brittle as the dead sea scrolls, especially at the edges.
Fortunately these paper's runs were preserved in other repositories.Some fun.

An entertaining but very sad story, one of many in the lore of newspaper archives. Thanks Mark.