Lovrien Gregory was born Mary Lovrien Price on July 19, 1888, in Philadelphia, Pennsylvania. Her birth date is from the Social Security Death Index and the birthplace was recorded on passenger lists.

Gregory’s granddaughter, Ann Cefola, has a blog called annogram and said Gregory “attended the Pennsylvania Academy of Fine Arts in 1893.”

The 1900 United States Federal Census recorded Gregory as the youngest of three siblings. The head of the household was Alfred Lawrence, Gregory’s maternal grandfather, who was married to Amanda. The census said Gregory, her mother, Isadora, siblings, and maternal grandparents resided in Philadelphia at 3332 Walnut Street.

Cefola said Gregory “won a 1906–1907 scholarship to the School of Industrial Arts at the Pennsylvania Museum”.

In the 1910 census, Gregory’s mother had remarried to Louis Schmidt, a university artist. Gregory’s half-sister was six-year-old Isadora. Gregory was an artist in the publishing field. They were Philadelphia residents at 4828 Hazel Avenue.

At some point Gregory moved to New York City where she married architect Julius Eugene Gregory in Manhattan on September 18, 1918.

The 1920 census counted the couple as Manhattan residents at 36 East 49th Street. She was a self-employed magazine illustrator.

Gregory was also a decorative painter. The New York Sun, March 10, 1925, featured Gregory with one her murals. 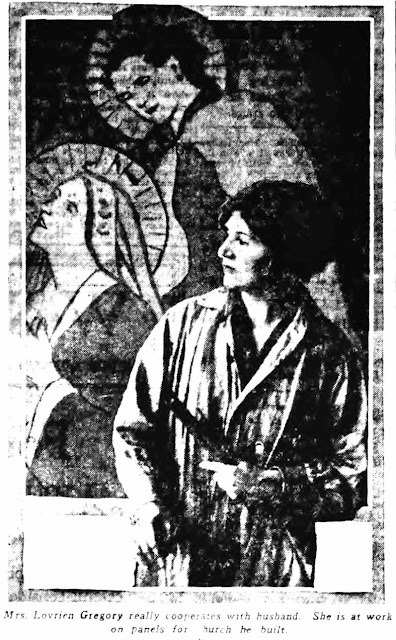 “One develops the agility of the mountain goat,” said Lovrien Gregory sedately.

She was speaking as a mural painter to whom lofts, ladders and canvases eight feet in height are all a part of the day’s work. Comparatively few women do murals, perhaps because they are not painted from the household type of stepladder mother uses when she hangs the curtains.

Mrs. Gregory has Just completed three panels for the new Calvary Methodist Episcopal Church, University avenue, New York, of which her husband, Julius Gregory, is the architect. It is to be dedicated early this spring. Two of her paintings measure eight feet in width, the other twelve. The drawing and color, welded with a spirituality that is rather remarkable in its appeal for even the untrained eye, are attracting much favorable attention. …

It may be that the [illegible] of this particular artist’s success is most clearly revealed in the word “Teamwork.” It is altogether inspiring the way she and her husband work together, he designing the lovely edifies; she decorating it. It is to this spiritual and artistic unity, to this sympathy and encouragement, fostered by the similarity of their artistic tastes and aims, that Mrs. Gregory attributes much of the sheer pleasure she finds in her work. Certainly Mr. Gregory is as proud of the mural decorations she did for the Church of All Nations in this city as she is of his work.

She keeps house—not an apartment—but a hospitable home with the rare city luxuries of a garden and a linen closet. When she plays she plays joyously; and when she works she is at it from 9 o’clock till dark, scaling ladders in a loft in Grand Central Palace, where she has found the studio space she requires.

For the rest, she is young and eager and vivid—compellingly radiant, with bobbed ha!r that is red in the right light and clear eyes that mirror a sweet and sunny spirit. You’ve noticed—who hasn’t?—the discontented mouths of the women of to-day. Lovrien Gregory’s mouth is that lovely feature, the smiling mouth of a happy woman. The strength, reverence and serenity she puts on canvas are not found ready mixed on any palette.

She, uses her name without the prefix, and when asked, admitted that while she believes in the tenets of the Lucy Stone League she has not joined as a member.

“But,” she remarked, contemplatively, “I suppose I ought to!” 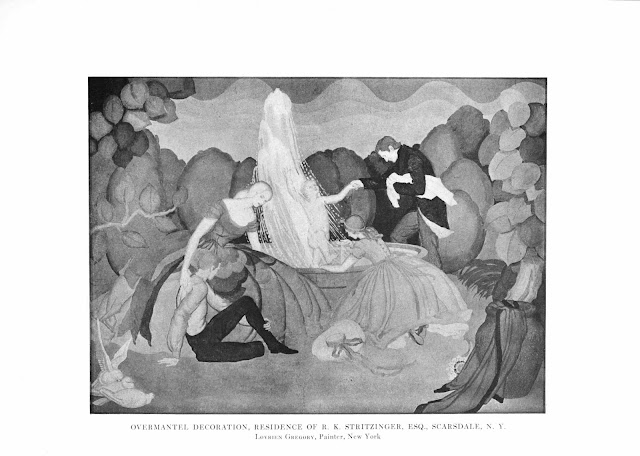 American Newspaper Comics (2012) said Gregory was the first artist to draw The Pioneers, from February 12, 1928 to July 15, 1928. She was followed by Ralph Wolfe, from July 22, 1928 to January 13, 1929. The series writers were Glenn Chaffin, who was followed by Wolfe. The Bell Syndicate distributed the strip.

On March 27, 1928, Gregory and her husband returned from Bermuda. The passenger list said their home address was 3 Church Lane, Scarsdale, New York.

Their address was unchanged in the 1930 census and they had two sons, Jules and Alfred.

Cefola said Gregory “won a scholarship, offered by France in gratitude for US assistance during WWI, to attend L’Ecole de Beaux-Arts in Fontainebleau. Leaving her sons in a care of a nanny, she shipped off in the summer of 1931.” A passenger list recorded her return home on October3, 1931.

According to the 1940 census, Gregory and her husband were living in Manhattan, New York City, at 71 Park Avenue. She was a self-employed painter. The census said she completed four years of college and earned five hundred dollars in 1939.

Gregory had a listing in the 1945 Manhattan, New York city directory: 350 Madison Avenue.

Cefola said ”Gregory and her husband Julius bought a cottage in Greensboro, Vermont near Caspian Lake. This home inspired Lovrien to create a series of landscapes, delicate watercolors and oils, as varied as the location itself. Driving up Route 5 was an all-day trip from Manhattan back then but a perfect gathering place for their adult children, Alfred and Jules, and their new respective brides. They sold the Greensboro house before Julius passed away in 1955.”

Gregory’s husband passed away December 4, 1955, according to an obituary in The New York Times, December 6.


Julius Gregory, architect of homes, died Sunday night in the Amity Nursing Home, Ringoes, N.J., after an illness of several months. His age was 80.

Mr. Gregory, whose designs for home magazines caused some of his houses to be reproduced widely across the country, was essentially a transactional architect. His work, often adapting newer concepts to traditional types, was a budge to the designs of later, modern architecture.

His New York practice, first at 2 Park Avenue and later at 66- Madison Avenue, spanned forty-two years, up to his retirement two years ago. At that time he moved to New Hope, Bucks County, Pa.

Born in Sacramento, Calif., he attended the University of California and studied abroad before establishing his practice in New York.

He served as architectural consultant for House and Garden magazine, for whom he designed the Ideal House, and for Home Beautiful, whose Pacesetter House he developed. Over the years his plans frequently won awards from professional societies.

During his career he designed many church structures. Among these were three Methodist edifices in New York: the Church of All Nations, 9 Second Avenue; Calvary Church, 1885 University Avenue, the Bronx an the Methodist Home, an institution for the aged on Spuyten Duyvil Parkway in the Bronx.

Surviving are his widow, Lovrien, and two sons, Jules of Lambertville, N.J.; and Alfred Lawrence.


Gregory passed away in August 1972. Cefola said Gregory “spent her last years in an eldercare community in Navesink, New Jersey.” She was laid to rest at Lake Park Cemetery.

Comments:
Alex, some of this is new to me, especially the charming newspaper article. Many thanks for your comprehensive research!
Ann Cefola

You're welcome and thanks for the kind words.

Alex, do you have a title for the New York Sun article and a page number? Where did you source that online?
Thanks,
Ann

The article is on page 22: Mural Painter Needs Agility of Mountain Goat After That, All Is Easy, Says Charming Artist

Alex, thank you so much! What a fantastic resource! Hope all is well in your world....