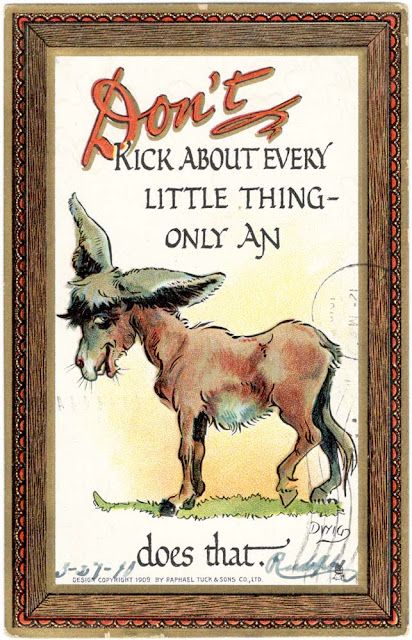 Here's another Dwig card from the Tuck "Knocks" Series (#165). It was postally used in 1910, and the writer had the good grace to apologize for the sentiment on the front. He did point out that it was good advice, but assured Miss Anna Javosky that she was not of such an offending nature.

Comments:
Mark Evanier posted on his blog the following request:

As you may know, I am one of the editors of Pogo: The Complete Syndicated Comic Strips, a series from Fantagraphics reprinting my favorite of all newspaper strips. We are close to sending Volume 6 off to press for release later this year but we have a problem. We are missing good copies of four of Walt Kelly's Sunday Pogo comics, all from 1959. We need to find someone who has either the original artwork to them or printed images from the newspapers.

The dates are August 2, August 23, October 4 and November 1. From '59. And we need either the tall 4-tiered versions or the complete 3-tiered versions. If you have them, please get in touch with me. You will be rewarded in some way.