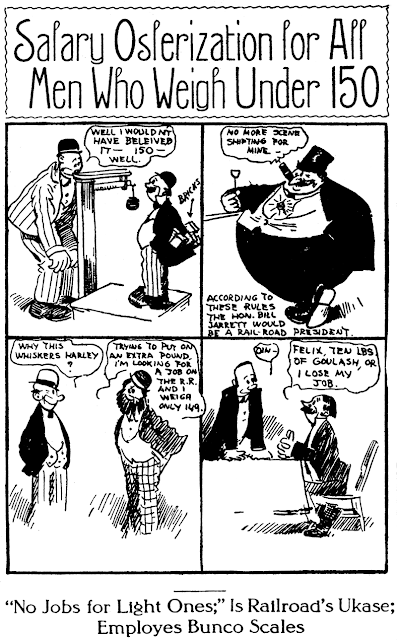 December 27 1909 -- According to the LA Examiner, the Delaware and Hudson Railway Company has determined based on (pseudo-)scientific research that men who weigh less than 150 pounds are unable to perform a "normal day's work" due to their slightness. The solution to the problem is simple -- they will pink slip any man of less than that weight. Apparently 19 men so far have fallen to the axe due to their lack of avoirdupois. Looking over news from subsequent months, it appears that the D&H went through with their idiotic plan and that there was no significant backlash from the employees' union.

Perhaps even more interesting in today's item is the use of a term that gained currency for a few years in the 1900s -- Oslerization.  What does it mean? Esteemed Canadian doctor William Osler was making a speech in Baltimore when he happened to mention in jest that men over the age of 60 might be euthanized due to their lack of usefulness. Osler was definitely joking; he was 55 at the time, and made mention that he was uncomfortably close to the cut-off date. However, some newspaper reporter in the audience, looking for a story, chose to take his remarks as having been made in seriousness. The story made all the wire services, and soon poor Doctor Osler was being widely regarded as an inhuman monster who wanted to euthanize older men. His name even became a widely recognized term for the concept, giving us the thankfully now forgotten term 'Oslerization.' The National Post offers much more detail to this shameful story.