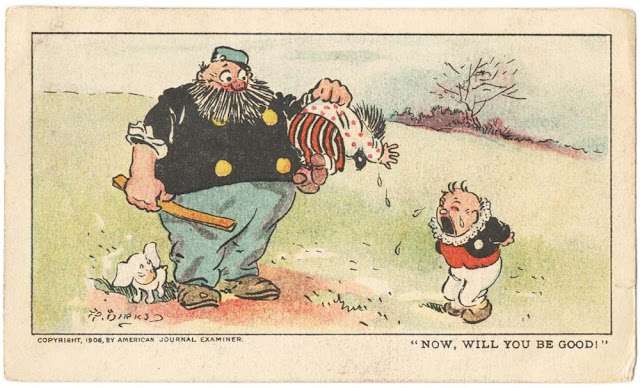 Here's a postcard given out by Hearst's New York American as a Sunday paper premium in 1906.

Comments:
One of the (many) things that have always amused me about the Katzies is the way they bawl so vehemently after they have been naughty (again). Actually, naughty is hardly the word — absolutely vicious and vile and sometimes murderous is more like it. Anyway, where was I? . . . Oh yeah, when they are spanked (or beaten, or thrashed) is they only time they display any mood besides wicked, chops-licking glee. They have two moods, before and after. I often wonder why they don't lay off a bit if they so hate being punished. I guess it's a vicious circle.And for us, the strip would be no fun if they were pious little swots . . . can you imagine that strip?

If I might venture a guess as to why the terrible two don't recieve a punishment to fit their misdeeds, is that there's a general rule about slapstick humor, you can't pay off women and children in kind for a gross indignity caused by them, or you will turn your audience against the figure who suffered the indignity. Instead of laughing with him/at him, one would be moved to see him with anger and contempt.

In 1906, a paddling with a stick would be seen as a just punishment for the pair, not only because we'll take it for granted that they are in a perpetual state of "needing it", but corporal punishment was standard child-rearing mode then anyway. I'm sure to tender current sensibilities, this might look like some kind of a crime against children.