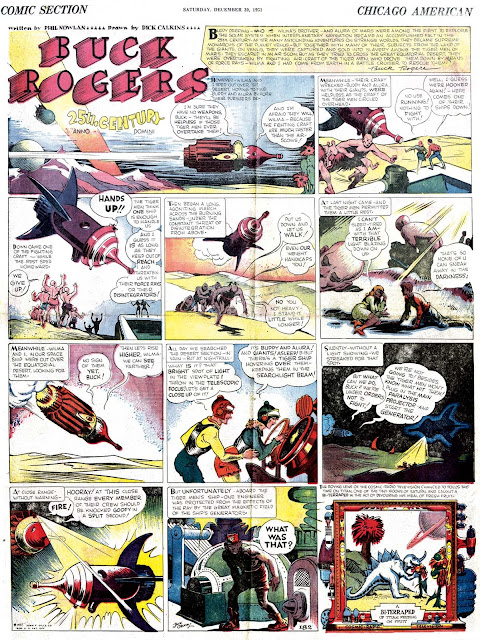 According to Eugene Seger, the Cosmic Radio Television feature ran on Buck Rogers pages 166 through 184, which means that the very last episode (if my ghosting credits are right) would have been drawn by Rick Yager, while all the rest were done by Russell Keaton. Those episode numbers, in a perfect world, would have run on May 28 to October 1 1933. However, Buck Rogers was often run late by subscribing papers, and as you can see the Chicago American was over two months late chronicling the adventures of Buck.

Comments:
As the John F. Dille strips were sold like British syndication, in lots, either the run of a continuity story, or in blocks of a one or two hundred gags, the official start and stop dates don't mean that much. I would guess that the only places they were met would be in papers that ran the series from the start or ones that started with some story on the exact start date that it "officially" began, and then they'd just go along from there.
The usual state of Dille strips is that when a client took the series, they would be started off with a story from it's first installment, even if it had started officially and in other papers months ago.
Your sample is from the Chicago American, the Hearst evening paper in that city. Those would have Saturday comic sections, and the comics would be dated for a Sunday use, though the strips were usually for tomorrow's use, they often were intended to be for the previous week.