[Cartoons Magazine, debuting in 1912, was a monthly magazine devoted primarily to reprinting editorial cartoons from U.S. and foreign newspapers. Articles about cartooning and cartoonists often supplemented the discussion of current events.

In November 1913 the magazine began to offer a monthly round-up of news about cartoonists and cartooning, eventually titled "What The Cartoonist Are Doing." There are lots of interesting historical nuggets in these sections, and this Stripper's Guide feature will  reprint one issue's worth each week.

Illustrations used here did not necessarily appear with the original articles.] 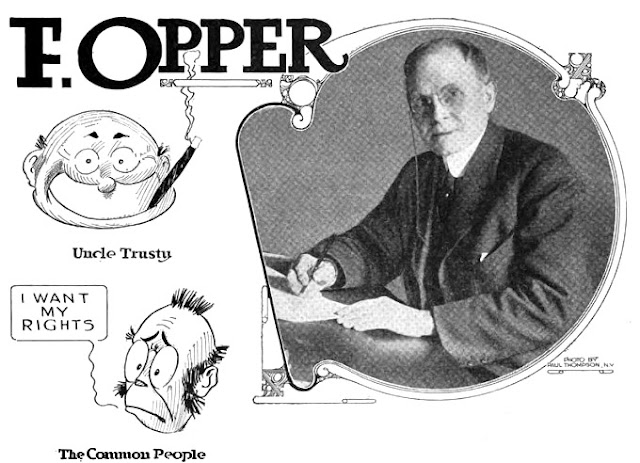 F. OPPER
Probably more people are familiar with the signature “F. Opper” in the lower left-hand corner of cartoons and humorous drawings than have ever seen the name of any other cartoonist.

There are several grounds on which this supposition is reasonably based. One of them, for instance, is that Frederick Burr Opper has been drawing “pictures for the paper” longer than any other cartoonist still actively in the harness. Another is that Opper does more work in a given time than any two other cartoonists, and would do still more if he were allowed or encouraged to do so. And then, the group of newspapers for which Opper's work is now done has a combined circulation that brings his work—political caftoons in the daily and two or three different series of “comics” in the Sunday—before a good many million Americans every week.

Away back in the days when Joseph Keppler was doing his greatest work for Puck, F. Opper was drawing and signing half a dozen cartoons for that publication every week. Before that he had been drawing pictures for Leslie's Weekly—but what's the use of telling a story backward?

To begin at the beginning, Frederick Burr Opper was born on Jan. 2, 1857– which makes him 57 years old this month —in the village of Madison Lake, Ohio. He went to the village school until he was fourteen, then got a job on the local weekly newspaper. A year later, at the age of fifteen, he went to New York to carve out a career for himself, after the fashion of the Oliver Optic and Horatio Alger boy heroes, who figured prominently in the juvenile literature of the early seventies:

Unlike many a misguided youngster who sought fame and fortune in the big city, Opper found what he was looking for— that is to say, a job. His year of newspaper experience in Madison Lake had hardly qualified him for a position on the staff of one of the great New York dailies —and he knew it. So he didn't waste any time trying to break into metropolitan journalism, but got employment in a Broadway store, where, besides selling goods, he turned his artistic talents to advantage in drawing tickets and price cards for window display. Evenings he drew humorous sketches and sent them to the comic papers.

The funny pictures “took.” Pretty soon other editors began to inquire as to the identity of the new artist who signed himself “F. Opper,” and Frank Leslie sent for him and gave him a job on the art staff of Leslie's Weekly. Opper worked for Leslie's for three years. Then he went to Puck and drew pictures for that publication for 18 years, leaving to take up the work he is now doing.

Opper's best-known political cartoons have been the “Willie and His Papa” series, published during the McKinley administration, and the “Uncle Trusty” cartoons that continued throughout the Roosevelt and Taft administrations. Two of his cartoon conceptions, the figure representing the trusts as a good-natured but cynical giant, and that of the common people, representing a harassed, partly bald little man with side whiskers and eye glasses, have become so completely standardized that they are now used by cartoonists generally to express these ideas.

SOME BOOST FOR TUTHILL!
It isn't often that a newspaper thinks as well of its cartoonist as the St. Louis Star, which recently passed into new hands, does of the one it now has. Tuthill is his name and the Star took him from the St. Louis Post-Dispatch, where he had been doing some very clever work. Here is the way the Star chortled in a three column advertisement the other day about young Mr. Tuthill:

“We are taking him away from another newspaper and putting him under contract.

“Tuthill began his cartooning with The Star one year ago this Fall and made his work the talk of the town in the political campaigns of November and April.

“Thousands of you know his work and will want to follow it every day in The New St. Louis Star.
“Tuthill has a touch of the great and able Homer Davenport in him.

“He will grow bigger in brain and power.

“He will make you think and talk.

“This is because Tuthill has ‘vision' and an appreciation of the important things of life.

“Tuthill is not one of the silly cartoonists or comic men who draw pictures of a frankfurter and make it cry: “Woof! Woof! !'

“There are alleged comic artists in St. Louis who consider such drawings to be humorous.

“We do not—and Tuthill does not.

“Every day you will find him drawing for our editorial page, and for no other newspaper in or out of St. Louis.”

The best of it is that almost everything the Star says about its “find” is justified by Tuthill's past performances.

“SWIN” GETS A REAL STEAK
Vegetarians may deny that the added ginger noticeable in the cartoons of the New York papers recently were due to beefsteak—but circumstances seem to point the other way. Some folks say that “there ain't no sich animile,” that beefsteaks are as extinct as the Dodo, but “Jimmie” Swinnerton knows better. When he checked his drawing board for the West recently, he was the recipient of a beefsteak dinner at which real beefsteaks were served by famous cartoonists arrayed in big aprons and cooks' caps. “Tad” Dorgan, “Rube” Goldberg, Fred Opper, Tom Powers, George McManus, Cliff Sterrett, Rudolph Block and Winsor McCay were the drawing cards. The beefsteaks were censored by “Winnie” Sheehan, secretary to Police Commissioner Waldo—and passed.

HOW A CARTOONIST GOT RICH
There is at least one authentic case of a cartoonist who became rich. His name is J. Stuart Blacton (actually Blackton - ed.), who lives in Flatbush and is prominent in Brooklyn millionaire society. Mr. Blacton undoubtedly has money. Among his minor enterprises at present is the building of a country estate at Oyster Bay, adjoining Sagamore Hill. He is an enthusiast in motor boating, a pastime in which he is said to have spent $100,000 in a single year.


But—and this is the main point in his story—Mr. Blacton didn't make his money drawing cartoons. He made it out of the motion-picture business, in which he was one of the pioneers. This, according to the Brooklyn Eagle, is the way it happened:

“A man primarily an artist, theoretically the last to glimpse a great new business field, he was nevertheless the first man in the country to see the commercial possibilities of the moving picture. Trained as an architect, at first a newspaper cartoonist, and then on the lyceum platforms as a ‘quick chalk artist,' he founded overnight the immensely profitable enterprise he now has a share in, approximately out of nothing. Some say that but $3,000 started the present big moving-picture concern in Flatbush; others that it was but $600. No one exactly knows, but the combined profits of the three owners today are probably $40,000 weekly.”

Besides being an accomplished cartoonist and a shrewd business man, Mr. Blacton paints exceedingly well and is said to be a remarkably clever amateur actor—and at the time he started in the motion-picture business, it took a man of that kind of versatility to see any commercial possibilities in it. The idea first came to him when he was sent by a New York newspaper to draw pictures of Edison's vitascope, which was then regarded more as a scientific curiosity than anything else. This ended later in his buying a kinetoscope and giving exhibitions in vaudeville theaters in New York. Then Mr. Blacton turned inventor and developed ways of reproducing by the thousands the strips of continuous pictures that he took.

Terry Gilkinson, formerly cartoonist of the Wheeling Register, a number of whose excellent drawings have been reproduced from time to time in Cartoons Magazine, has moved to Cleveland, where he is cartoonist for the Cleveland Press.

This magazine has received a contribution from Walter E. Stark, cartoonist of the Rochester (N. Y.). Herald, for the Homer Davenport Memorial Fund.

Labels: What The Cartoonists Are Doing