In the 1900 U.S. Federal Census, Crerie was the oldest of two sons born to Edward, an insurance agent, and Sarah. They resided in Worcester at 64 Coburn Avenue. Worcester city directories, for 1903 and 1904, listed Crerie at the same address and as a student in Boston, where he graduated from the Massachusetts Normal Art School in 1905.

Th 1906 Boston city directory said Crerie was an artist who boarded in Somerville and had a studio at 408 Sears Building. The 1907 Worcester directory listed him at 64 Coburn Avenue.

The May 1907 register of Bradley Polytechnic Institute, in Peoria, Illinois, said Crerie was on its staff.


The same listing appeared in May 1908 register.


Glasgow, July 12— … Frank Crerie, art instructor at Bradley institute, Peoria, has joined the party temporarily and will travel as far as London. He was a passenger on board the Columbia and performed yeoman service in rescuing steamer rugs and suit cases during the confusion of the first two days. …

The 1909 Peoria directory had Crerie’s address as 813 St. James. The May 1909 Bradley Polytechnic Institute register included Crerie’s resume with an asterisk that indicated he had resigned. In 1909 Crerie moved to Des Moines, Iowa where his address was 1439 7th Street.

The 1910 census said magazine illustrator Crerie was at the same address in Des Moines. He was one of two lodgers at the Moulden’s residence. The other lodger was Julia Higgins, a stenographer at a printing office.

Newspaper Feature Service had a long-running series of romantic cartoons, from late 1913 to 1931, which were credited to many artists. Crerie was a contributor in 1917.

The New York Tribune, September 12, 1919, mentioned Crerie’s purchase of a house, “Bowles & Co. have sold for A.A. Lincoln a house on Westview Avenue, Leonia, to Frank Crerie, of Edgewater, N.J. …” In the 1920 census, the self-employed artist, his wife and month-old daughter, Lucille, lived at 325 Westview Avenue.

Crerie produced the cover art for Shipper and Carrier, August 1923. 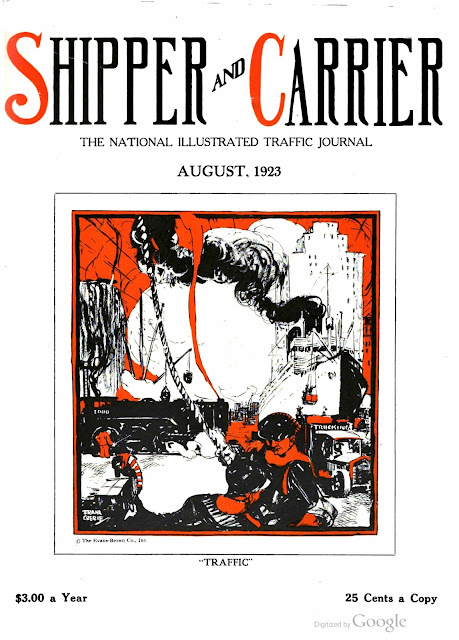 According to the 1930 census, Crerie owned a house in Leonia at 309 Westview Avenue. His child was nine-year-old Frank.

Generations Before Us has a collection of diaries from Leonia. One diary mentioned Crerie on March 28, 1937, “Very windy morning so clothes were dry before noon. Mr. Frank Crerie made quite a call. Miss Eaton here too. I polished all my furniture, scrubbed hall floor, etc.”

On April 27, 1942, Crerie signed his World War II draft card which had the address, 1328 River Road, West Englewood, New Jersey. The artist was described as six feet one inch, 192 pounds with blue eyes and gray hair.

Paul H. Mattingly wrote about Crerie in his book, An American Art Colony (2019), and said in part


Crerie loved open country and his reading included history, travel, and nature lore. He had a log cabin on Lake Michigan in northern Wisconsin. He specialized in black and white, also water colors and oils. Later in his career he became known for his portraiture. He had exhibited in Worcester Art Museum, Boston Art Club, Des Moines Art Museum and New York galleries. Books he illustrated included Ring Larder’s Treat ’Em Rough (1918).

Crerie passed away October 13, 1956, in Worcester, Massachusetts, according to an obituary in the Hackensack Record, October 17, 1956.

Worcester, Mass., Oct. 17 Frank L. Crerie of 1328 River Road, Teaneck, died here while visiting Saturday. For the past 30 years he had been a well known commercial artist in New York.

Crerie lived for 20 years in Leonia, before moving to Teaneck in 1936. He was graduated from the Boston Art School and was for years a member of the Art Students’ League of New York.

He had art studios in Teaneck and in New York.