In the 1900 U.S. Federal Census Delevante was the “adopted son” of Jacob, a bookkeeper, and Edith Henriques, both Jamaican natives.

Delevante has not yet been found in the 1910 census.

On April 28, 1914, Delevante traveled on the steamship Trent from Colon to New York City where he arrived May 6. The passenger list said Delevante was Hebrew and had been living in Panama. The last time he was in New York was 1910. Delevante’s destination was 2709 Newkirk Avenue, Brooklyn, where his biological father was residing. Delevante’s father also paid for his passage.

The same address was recorded in the 1915 New York state census. Delvante, an art student, was the third of six siblings. His father, a steamship company accountant, had remarried to Alethia. It’s not yet known where Delevante received his art training; one possibility was Pratt Institute which was about four miles from his home.

On June 5, 1917 Delevante signed his World War I draft card. His address was unchanged. The self-employed artist was described as short, medium build with brown eyes and dark brown hair. Delevante’s New York military service record, at Ancestry.com, said his service began July 15, 1918 in Brooklyn. While stationed at Camp Joseph E. Johnston in Jacksonville, Florida, Delevante filed a Petition for Naturalization on August 15, 1918.

After the war Delevante returned to New York City. The Newspaper Feature Service produced a long-running series of romantic cartoons, by several artists, beginning in 1913. Delevante contributed to the series in 1919.

He married Thelma Gebhart on February 15, 1920 in Manhattan.

American Newspaper Comics (2012) said Delevante was the second of two artists to draw Adventures of Vivian Vanity. The series began with Nicholas Afonsky, aka Meetrich, on September 29, 1925. Delevante took over from May 10 to August 1926. Wheeler-Nicholson, Inc. was the syndicate

In the 1930 census Delevante’s residence was at 658–666 West 188 Street in Manhattan. He was a freelance illustrator whose drawings appeared in several issues of the Evening Star and the newspaper magazine, This Week. 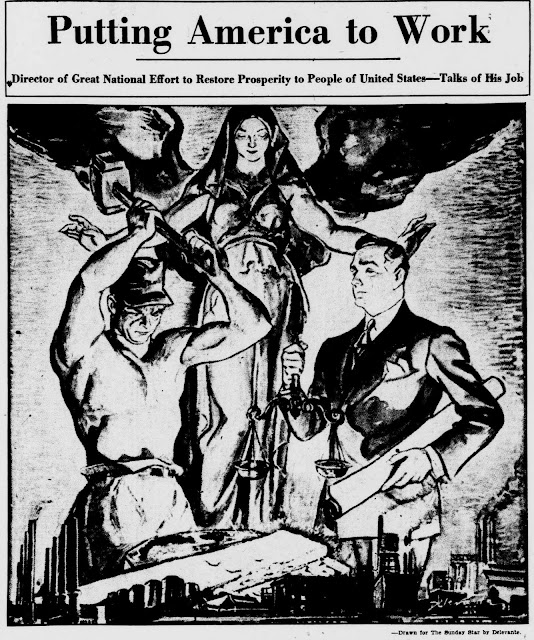 The Putnam County Courier (Carmel, New York), July 9, 1937, named Delevante as one of the instructors at The Homestead at Crafts.


The principal feature of this year’s season at The Homestead will be the art course to be given by Mr. Sidney Delevante,. of New York city. This course will be given for six weeks, from July 12 to August 20, and will present work in all mediums with portrait and character painting, landscape, still-life and figure and composition. Mr. Delevante’s skill as a teacher of art is distinctive and this course proves to be a singular contribution to the cultural life of Putnam county.

According to the 1940 census, the newlyweds resided at 510 West 124th Street in Manhattan. Delevante was an art teacher whose highest level of education was the fourth year of high school.

Delevante’s address was the same on his World War II draft card which he signed April 25, 1942. His description was five feet two inches, 124 pounds, with gray and hazel eyes and brown and gray hair, and wore glasses.

One of Delevante’s notable students was Seymour Chwast (class of 1951), who wrote in his book, The Left-Handed Designer (1985), “Sidney Delevante, my drawing teacher, revolutionized my way of thinking by making me start everything from zero with nothing preconceived.”

Delevante was an instructor at Columbia University. A brief bio appeared in the school’s Program in the Arts, 1962–1963.


Sidney Delevante. Instructor in Painting
Studied at Art Students League. Instructor at Cooper Union and Art Center of Northern New Jersey. Exhibited and lectured in galleries and museums in New York, Washington, and other cities.


Delevante passed away in October 1984, at New York City, according to the Social Security Death Index.