Continuing on with our index of the NFS romantic cartoon weekday series, we have arrived at 1915. Unfortunately the Washington Times crapped out on me, but I found a good paper in the Austin Stateman. Well, it was good for awhile anyway. In January 1915 they are printing cartoons six days a week, but then the frequency drops off slowly but surely. Whether this is a function of what the syndicate was offering or the newspaper was dropping the panel more and more often is a question I can't answer.

By June the Statesman is getting pretty lax, but the Washington Times had in the meantime gotten revitalized, so I was able to use it for July through November before the seemingly inevitable fall-off once again. By November they are obviously not going along with the syndicate run date requests at all, because I start finding the occasionally two cartoon day, which I feel sure is not how the syndicate was issuing the material.

For December I switch the the Shreveport Times, which always seemed to be dropping material, but it is the best I can find for the remainder of 1915, and 1916 through August. The remainder of 1916 was indexed in the El Paso Times. 1916 is probably the worst year for the index -- I'm confident that these papers were dropping a lot of material.Thankfully things will improve starting in 1917. 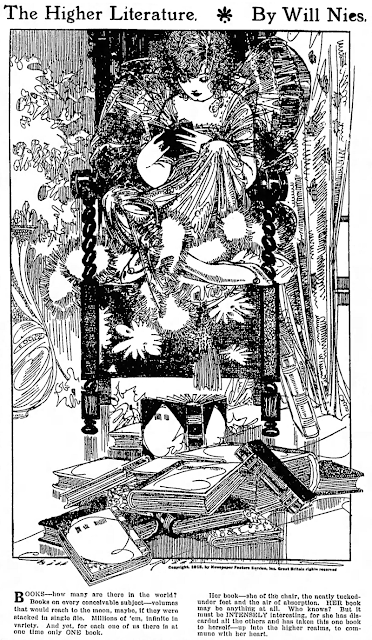 Artist-wise, 1915 finds us losing Gustav Michelson (GM) in July. He's replaced by a new regular, Will Nies (WN). Nies is another graduate of the Nell Brinkley school of romantic cartooning, but he's a cut above the run of the mill. The romantic cartoon series is the only credit I've been able to find for him. 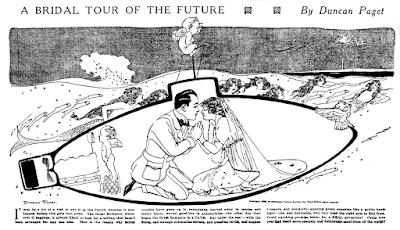 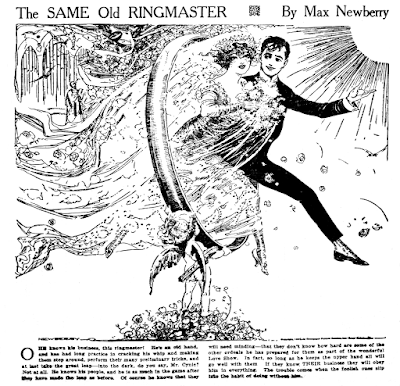 We also have a few drop-ins; Duncan Paget (DP) does a few panels in February 1915, and Max Newberry (MN) I can only credit with a single panel in May 1915. Both are excellent cartoonists, especially Newberry. Newberry's name pops up over the decades as a newspaper artist for the New York Herald and at the San Francisco Examiner. His big claim to fame seems to be a trip he took with a newspaper reporter to the Klondike during the 1890s gold rush there. Mr. Paget, on the other hand, left no biographical trail that I can detect.  He will, however, pop up in the annals of the romantic cartoon series again when he produces another handful of cartoons in 1920.