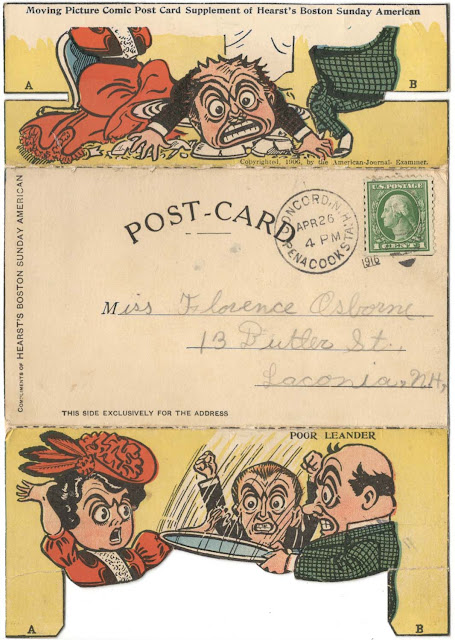 Here's a card from a freebie series given away by the Hearst papers, this one featuring the players in Howarth's "The Love of Lulu and Leander". The series was called the Moving Picture Comic Post Card, and as you can see it is essentially a double card, in which the top third and bottom third fold together. I have no idea how one makes this picture "move", though. If the idea is that the platter can be made to konk poor Leander on the head, I don't see how that works. To make the platter "move" you need to shift the whole top half of the picture, which makes Lulu and her dad split into two parts. I get the feeling I'm missing something really simple.

Comments:
A guess, based on a cereal box cutout from the early 60s:

You write your message on the flip side, then fold the bottom up and the top down to cover it. Slip the tabs into the slots. My guess is that the platter will be above the guy's head, and the tabs will allow movement.

If you squeeze the folded card from top and bottom, the two parts of the image slide a little closer together for the impact; release and the stiffness of the card will lift the platter back to first position. Repeat for slapstick effect. Yes, the illusion is far from perfect but amusing enough for a postcard.

If you have a printer, you can cut it out and readily test this theory. Card stock should provide the necessary "spring".

If the reverse side doesn't carry any instructions, maybe they appeared in the comic section that included the card. I'd be interested to know if there were any more of these. Perhaps there were variations on the gimmick (turning the art 90 degrees for vertical action, or even a diagonal cut).

This same card (NY Version) is in my collection and in one of my (now abandoned) "Ask the Archivist" entries I showed it and how it would look when ready for action. Within, you will see how these cards looked in their pristine state, printed two at a time, with cutaway instructions offered.

Incidentally-I've never seen another one of these Hearst character cards used ten years after they were issued. About a decade after Leander and Howarth left the scene, too. Go here: