… Eben Ringo and Julia Cynthia (Ragan) Black. His father, whose ancestry is English and Dutch, was born near Dallas, Texas, May 22, 1860. His mother, a music teacher and an active church worker, was born of Scotch-Irish parents at New Winchester, Indiana, April 29, 1867.


In the 1900 U.S. Federal Census, Black was the youngest of three children whose father was a ticket broker. They lived in Cheyenne, Wyoming at 422 East 19th Street.

Nebraskana said Black graduated high school in 1917. Who’s Who in American Art said Black was a pupil of Walter L. Evans who operated his School of Cartooning and Caricaturing in Cleveland, Ohio, and through correspondence.

Black was a student at the University of Nebraska from 1918 to 1923, where he was sports editor of the Daily Nebraskan, and was art editor of Awgwan. He was a member of Sigma Delta Chi, journalistic fraternity.

On September 12, 1918, Black signed his World War I draft card. His occupation was “card writer, Miller & Paine, 13 and O Sts, Lincoln, Neb.”. He was described as medium height and build with brown eyes and dark hair. The Department of Veterans Affairs BIRLS Death File, at Ancestry.com, said Black enlisted October 12, 1918 and was discharged December 13, 1918.

Black was a cartoonist for a daily paper as recorded in the 1920 census. He lived at home with his parents and siblings in Lincoln at 2005 South 26 Street. For the Lincoln Journal and Star, he produced the series Here in Lincoln which Nebraskana said began in 1919.

Black’s address was unchanged in the 1922 city directory. That year Black graduated from the University of Nebraska’s School of Fine Art. 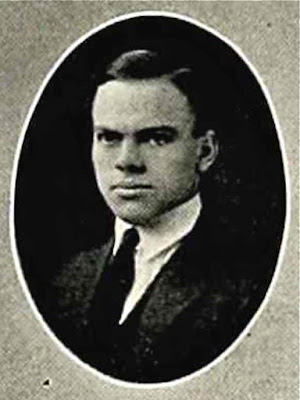 1922 issues of Wayside Tales included a Federal School of Illustrating and Cartooning advertisement that mentioned Black:


Do You Like to Draw?
One of the objects in printing this letter is to show you what can be accomplished during your spare time.

Oz Black is cartoonist for the Lincoln Star. He studied cartooning, under W.L. Evans, when he was going to school and college. He only worked at his lessons during his spare moments. Sometimes it was four or five months between lessons. If you like to draw don’t waste your time by drawing merely “funny pictures.” You can have just as much fun learning how to draw real cartoons. Some of the cleverest cartoonists are former pupils. This school is recommended by cartoonists because they know the students are taught in the right way.


Prairie University: A History of the University of Nebraska (1995) reprinted two of Black’s cartoons.

The Cook County, Illinois Marriage Indexes, at Ancestry.com, said Black married Alona Carpenter on March 17, 1923. Nebraskana said “Mrs. Black, who was born at Knoxville, Iowa, November 14, 1899, is a primary teacher and a writer for children's magazines. …”

The 1923 Lincoln directory listed Black at the Milburn Apartments. He was a cartoonist with the Star Publishing Company. His address in the 1924 directory was 1625 South 23rd Street.


Washington, Dec. 26--Oz Black, cartoonist of the Lincoln (Neb.) “Daily Star,” today was awarded the $250 prize offered by the National League of Women Voters in the nation-wide contest for the published cartoon “best calculated to arouse general interest in voting and increased attendance at the polls.”

Nebraskana said “He served as newspaper reporter and cartoonist of the Lincoln Star where he conducted the widely known feature, Here in Lincoln, 1919–1927; and was commercial artist in Lincoln from 1928 to 1930. Since 1930 he has been cartoonist and art director on the Nebraska State Journal, drawing a full page Sunday cartoon feature under the title, Here In Lincoln.”

The 1930 census recorded Black, his wife and daughter in Lincoln at 1845 South 27th Street. He was a commercial artist with his own studio.

According to the 1940 census, Lincoln remained Black’s home town but at a different address, 2101 Lake Street. The newspaper cartoonist had two years of college. About six months after the census enumeration, Black was on the move.

A late 1940 or early 1941 issue of Themis of Zeta Tau Alpha eported Black’s new job: “Alona R. Black left October 1 with Mr. Black and their two daughters for Minneapolis, Minn. ‘Oz’ Black, well known cartoonist for the Lincoln Sunday Journal and Star, has accepted a position on the editorial staff of the Minneapolis Star-Journal, where he will be cartoonist, illustrator and feature writer.”

Black’s participation at a lodge event was reported in the May 1955 issue of Sons of Norway:


Oslo 2 Has Indoor Picnic
Planned especially to interest the children, Oslo 2, Minneapolis, held an indoor picnic at Norway Hall Sunday, March 27, which drew a large number of children. Entertainment features included games and contests with prizes, a chalk-talk by Oz Black, Minneapolis cartoonist, a puppet show and Walt Disney films in color. A picnic lunch followed the program. The lodge plans to make these affairs an annual event.


The Nebraska State Historical Society said Black was cartoonist “…for the Minneapolis Tribune from 1940 [to] 1952. From 1952 [to] 1957, he free-lanced in Minneapolis and then moved to Denver. While in Denver, Black served as the Director of Public Relations for the Denver Area Council of Churches and Instructor in Cartooning and Caricature at the University of Colorado Institute of Adult Learning in Denver.”

The Omaha World Herald, October 25, 1966, published this item “ … Oz Black, former Lincoln and Minneapolis newspaper cartoonist. Oz has a studio in Denver. He is helping arrange the fiftieth anniversary reunion of the Lincoln High Class of 1917 for next May.”

Black passed away December 28, 1977, in Los Angeles, California, according to the California Death Index at Ancestry.com. The Social Security Death Index said his last residence was Denver, Colorado.