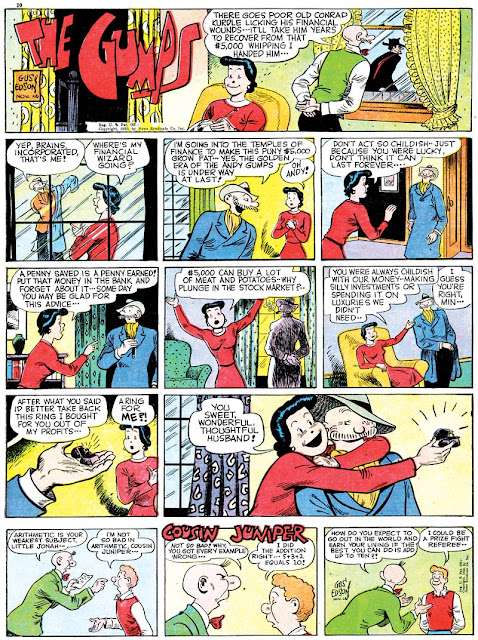 Under the direction of its original creator, Sidney Smith, The Gumps was the gold standard for comedy - soap opera strips, a genre that it created. When Smith died in 1935, however, the Chicago Tribune - New York News Syndicate made what is pretty universally considered an error in judgment by handing the strip over to Gus Edson.

The heir apparent for The Gumps was Stanley Link, but according to legend, Link thought he had the syndicate by the short hairs. He made some pretty big demands and acted as if he was indispensible. According to a story told to me by Jim Ivey, Link put the final nail in his coffin when he came to a meeting with syndicate chief Joe Patterson and put his feet up on the Captain's desk. Apparently Link was not totally out of favor, because he continued Ching Chow, Tiny Tim and originated other features for the syndicate for many years hence.

I find Edson's version of The Gumps to be really tiresome, but perhaps through inertia alone the strip maintained a very healthy list of newspaper clients through the 1940s and even into the 50s.

The Sunday page of the strip had a topper for awhile in the Sidney Smith years, a revival of Smith's popular Old Doc Yak strip that was his first big hit back in the teens. But Smith or his syndicate seemed to have little interest in it, and it was dropped in early 1934. From then on the strip ran without a topper at all (a rarity in the 1930s) until the first Sunday of 1944, when the Gus Edson version suddenly added a one-tier topper called Cousin Juniper. Juniper was a pre-existing character in the strip, a bald sailor who had befriended young Chester Gump. In the topper he became a bland vehicle for weak gags.

The topper made The Gumps function better in the newly popular third page size; rather than trying to shoehorn a whole tab's worth of strip into that small format, the main strip was shortened so as not to end up with a very busy looking three tier third.

The new strip was emininetly forgettable, but appeared as a part of the half-page and tab versions of the strip for over a decade. In 1955 Edson for some reason dropped Cousin Juniper in favor of a new topper strip titled Grandpa Noah. Unfortunately, finding The Gumps Sundays in either of those formats by 1955 is so unusual that I can't give you a specific end date for Cousin Juniper, and I don't know how long Grandpa Noah ran. (I can say that based on original art for the feature, the topper seems to have disappeared by 1957.) Any information readers can give would be much appreciated.

Comments:
Have you check out neither the Chicago Tribune or New York Daily News Sundays on newspapers.com yet? You might find those toppers there!!!