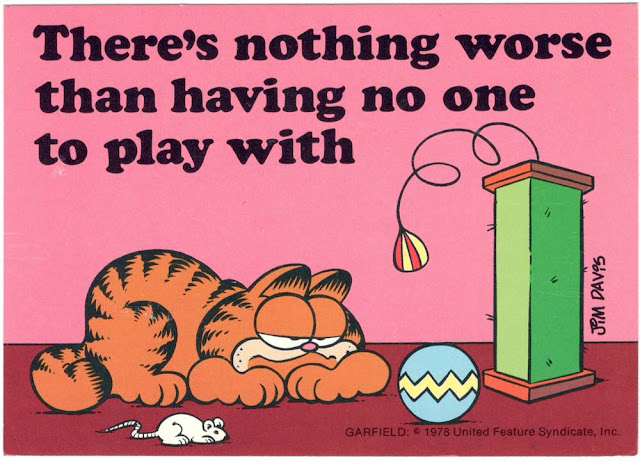 Although the most active period for cartoonist-drawn postcards was the first decade or so of the 20th century, others followed later. Here's a very late one, a Garfield card by Jim Davis. This was part of a series published by Argus Communications out of Allen, Texas. Although the copyright is for 1978, I'm betting that the cards were published in the 1980s.

There are some very funny and original cards in the series, but this one maybe not so much (we'll revisit this series with some of the better entries eventually). This card is coded as #P2080 of the series.

Comments:
The copyright here is not for the item or when the artwork was produced for it, but the Trade Mark,ergo, the character itself. You'll see a Charlie Brown picture with the date 1950 attached to it, or at least you used to see Popeye with a 1929 copyright or Olive Oyl with a 1919 one. Incidentally, she (and Thimble Theatre) were 100 years old yesterday. If I still had my KFS blog, you'd have seen a whole lot of commemoratin' goin' on. But no. Tempus Fugit.