Emidio “Mike” Angelo was born on December 4, 1903, in Philadelphia, Pennsylvania, according to the Social Security Death Index and several volumes of Who’s Who in American Art.

Angelo and his family has not yet been found in the 1910 U.S. Federal Census.

The 1920 census recorded Angelo as the oldest of six children born to Stanley, a baker, and Laura (Alessandroni). The family resided in Philadelphia at 1325 Garnet Street. Angelo was an assistant at a newspaper office.

Who’s Who (1989) said Angelo studied at the Philadelphia Museum and School of Industrial Art and the Pennsylvania Academy of Fine Arts (PAFA). The Philadelphia Inquirer, November 15, 1953, said he started at PAFA in 1924. The 1936–1937 Who’s Who said he was a pupil of George Harding and Henry McCarter. Angelo was awarded PAFA’s European Traveling Scholarship in 1927 and 1928.

A passenger list, at Ancestry.com, said Angelo arrived in New York city on September 20, 1927. He had departed Cherbourg, France on September 14. His address at the time was 1255 South 21st Street, Philadelphia.

According to the 1930 census, Angelo’s mother was a widow who had seven children. The family lived at 1628 South 22nd Street in Philadelphia. Angelo’s occupation was commercial artist.

The same address was in the 1936-1937 Who’s Who that said Angelo was a member of the Da Vinci Alliance and Fellowship of PAFA. His pen portraits from life included Mussolini, ex-Presidents Coolidge and Taft, William Jennings Bryan, Premier Dino Grandi, Rudolph Valentino and others. His cartoons were published in Saturday Evening Post, Collier’s, Life, Judge, Ballyhoo, College Humor, Sales Management, Bell Telephone News and the Public Ledger. He lectured on “Cartoons and Caricatures.”

Angelo has not yet been found in the 1940 census.

American Newspaper Comics (2012) said Angelo produced Funny Angles from January 1, 1945 to 1958. The panel was known later as Emily and Mabel. Vincent Schiller contributed to the writing. 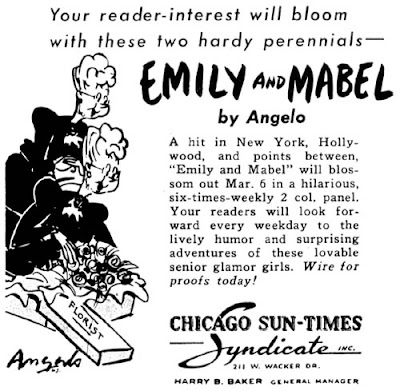 The Inquirer, November 15, 1953, reported the annual PAFA exhibition and said


This is the first year that humor, in the form of a gallery of original cartoons, has been included in these annual exhibitions. Angelo will speak particularly about this phase of the show.

In 1957 a collection of Angelo’s cartoons, The Time of Your Life, was published by the John C. Winston Company.

Who’s Who (1976) said Angelo received the Da Vinci Award silver medals in 1958, 1960 and 1968, and a bronze medal in 1961. He was awarded a gold medal from the Philadelphia Sketch Club in 1969. His memberships included the National Cartoonists Society and the American Editorial Cartoonists. He was the producer of the 1967 short color film, Alighier’s, The Inferno.

The 1989 Who’s Who said Angelo was an advance art class instructor at Samuel S Fleisher Art Memorial in Philadelphia. He received the Freedom Foundation Award in 1983. His mailing address was 419 Redleaf Road, Wynnewood Pennsylvania 19096.

Comments:
Emily and Mabel remind me of the Whoops! sisters by Peter Arno, in the early 30s.