John Rosol was born John Rosolowicz on June 14, 1911, in Philadelphia, Pennsylvania, according to his birth certificate at Ancestry.com. His parents were Nicholas and Annie Rosolowicz, both Ukrainian emigrants. On their naturalization papers the family name was spelled Rosolovicz; they arrived in the United States on March 12, 1903.

During World War I, Rosol resided at 1950 Bristol Street in Philadelphia. The same address was recorded in the 1920 U.S. Federal Census. Rosol was the youngest of three siblings. Their father owned and operated a saloon.

A 1940 issue of Ukrainian Life said


…[Rosol] attended the Gratz High School, and upon graduation received a four-year scholarship to the School of Industrial Art. In 1930 he took College Humor’s second contest award. After graduation from art school, he worked for the art department of The Evening Public Ledger of Philadelphia.


The Philadelphia Inquirer, July 3, 1995, said Rosol was “a graduate of Germantown High School … [and] received a bachelor of arts degree from the Philadelphia College of Art.” Biographical Sketches of Cartoonists & Illustrators in the Swann Collection of the Library of Congress (2014) said Rosol “trained at the Pennsylvania Museum School of Industrial Art.”

The 1930 census said Rosol lived with his parents and sister in Philadelphia at 3944 North Smedley Street.


Our Cartoonist
The “U. W.” has gained a staunch friend in the person of John Rosolowicz who wishes to contribute to its columns by sending in cartoons, free of charge, for which kindness we extend our most sincere thanks.

Mr. John Rosolowicz, 22 years of age, is a son of well known Ukrainian family in Philadelphia, Pa. His father M.[sic] Rosolowicz was for a long time one of the comptrolers [sic] of the U. N. A., and one of the founders of its first branch in Philadelphia. John’s sister, Mrs. N. Dubas, is a piano instructor, and well known for her appearances on the Ukrainian concert stage.

John, after completing high school studied in the Academy of Fine Arts, and then turned to cartooning as his specialty. He has contributed cartoons to the “Saturday Evening Post”, “The Country Gentlemen”, “Literary Digest”, and other publications. At. the present time he is connected with the Art Department of the Philadelphia “Public Ledger”. 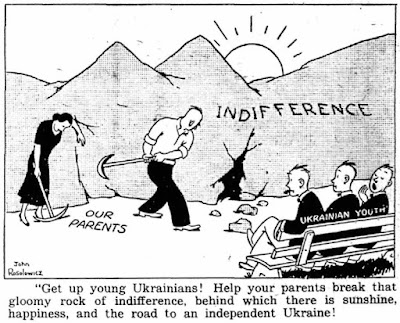 
John Rosol (Rosolowicz), the young Ukrainian who drew саґtoons for the Ukrainian Weekly several years ago, and whose clev­er sketches have appeared in the Saturday Evening/Post and other American and English magazines, has now been engaged Philadelphia “Evening Ledger.”

Last Wednesday’s issue of the newspaper bore a streamer head­ line across the top of the first page, reading: “A new feature to­ day: The Cat and the Kid, by a new clever comic artist.” On a different page a similar announcement is made, but occupying much more space, in which it is stated that John Rosol is the “man who has made millions laugh with his clever cartoon sketches appearing in The Saturday Evening Post.”

On October 16, 1940, Rosol signed his World War I draft card. His address was 1437 West Cayuga Street in Philadelphia. He named his mother, who was at the same address, as next of kin. Rosol’s description was five feet nine inches, 134 pounds with brown eyes and hair.

Rosol was mentioned in The Ukrainian Immigrants in the United States (1939) and One America: The History, Contributions, and Present Problems of Our Racial and National Minorities (1945).

A 1940 issue of Ukrainian Life, announced Rosol had joined its staff.

For King Features Syndicate, Rosol produced Here and There which ran in 1941.

Rosol’s Cat O’ Five Tails was published by the David McKay Company in 1944.

A 1946 issue of Advertising & Selling said “John Rosol, whose cats have found a home in the Post for years, has paid students for the use of their cartoon ideas.”