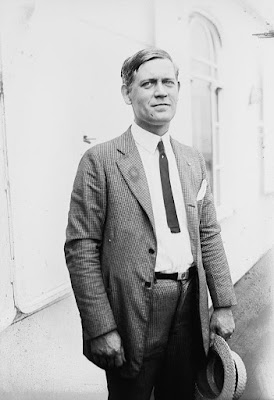 Thornton Edward Fisher was born on April 8, 1888, in Cincinnati, Ohio, according to his World War I and II draft cards.

In the 1900 U.S. Federal Census, Fisher, his mother and sister were in the household of his uncle, Charles Burkhead and his family. They resided on Clason Street in Columbia, Ohio.

Thornton was profiled in the New York Telegram-Mail, April 25, 1924. The newspaper explained the whereabouts of Thornton’s father and family travels.


Fisher began life in the middle eighties in Cincinnati, Ohio, and by the time he reached school age his father had been appointed a special inspector in the Post Office Department under the regime of Postmaster General John Wanamaker. The result was that he went to school in nearly every city of importance in the East and in some parts of the South, including Brooklyn, Philadelphia, Washington and Greensboro, N. C. He was fortunate in getting time to finish high school in Pittsburg, Pa.

His first defeat occurred in the grammar grades in Cincinnati, where he did several sketches of his teacher instead of doing mathematics, his propensity for drawing being knocked out of him for several years. To be exact, it was not until he reached the high school stage in Pittsburg that he began to draw in earnest.


The 1905 New York state census recorded Fisher and his family in Brooklyn at 310 Livingston Street. Fisher worked in real estate and his father was a broker.


Ambition swelled his chest and he came to New York with a massive portfolio full of cartoons with the idea of “peddling” them at the various engraving shops. Failing, he tackled the city editor of the Globe. “If you happened to be a Raphael or a Kipling I could use you,” the C. E. told him. “And being neither, I naturally took the air,” he said.

Tom Quinn, managing editor of the old Daily News, then located across the street on Park row from the Post Office, gave Fisher his first job—not as an artist, but as a reporter at police headquarters.

His first assignment was a murder case, concerning which he wrote two columns. About two inches of type appeared in the paper. He was proud of the story. The humiliation was great, but he bore up under the shock and learned there was such a thing as brevity. Day after day meanwhile he continued his studies at the various art schools in and about New York city and working in his spare time in the studio of Dan McCarthy, cartoonist and good angel to hundreds of struggling young artists, who, though long dead, lives in their memory.

Then came the day of days—his assignment as a retouching artist on the News, which had moved to Twenty-fifth street. From that moment on he dreamed of the day when he would “make Gibson look like a beginner.” After a while the chance came for him to do comics on the Philadelphia Record as well as to do some illustrating for books and magazines. Within six months be was back in New York for a short stay and the next two years found him doing comic, sport and political cartoons for the Cleveland Leader. Fisher put the succeeding two years in doing the same sort of work for the St. Louis Republic.


But the New York virus had permeated his system and he could stay away no longer. Senator James Smith gave him a job on the Newark Star while he awaited an assignment to do a Sunday comic for the New York Herald, having applied for it when he learned that Winsor McCay had definitely made arrangements to transfer his activities to the American. [McCay left in 1911.]

On the Herald Fisher jumped into fame with his [August 31, 1913] strip entitled “Wishing Wisp,” a sort of fantasy that New Yorkers need not become so very reminiscent to recall. In addition he wrote stories for the newspaper’s Sunday magazine section.

A vastly more remunerative position on the World was his next jump, which became even more so with the success of the two strips, “The Marrying of Mary” [debuted June 11, 1914] and its [October 18, 1915] sequel, “Mary’s Married Life.” It was while doing this that he became a substitute for Bob Edgren, whose work on the World had become internationally famous. He found his natural inclination to gravitate toward sport greatly stimulated until in fact it became clear to him that be had at last found his particular niche. McClure’s Newspaper Syndicate was attracted by the conception and excellent execution of his work and a contract calling for considerably more salary than be was receiving at the time was sent to hint. He signed on the dotted line.

Two years later Bob Edgren retired and went to California. The executives on the World, mindful of his work for them, offered him the position. McClure’s graciously released him. [Edgren’s last sports cartoon for the World appeared July 20, 1918. Fisher’s run on the sports page began July 23, 1918.]  All told the World published Thornton Fisher’s sketches for ten years. During that time he had all the thrills attendant upon the game, even going in for writing and drawing aviation races, a sport that almost drew him from newspaper work and would have had it not been for the “mailed fist” of his boss and the pleading of his mother.

In the last few years of the decade Fisher wrote verse and short stories and sold them to Popular Magazine.

According to the 1915 New York state census, cartoonist Fisher, his family, mother and sister were Brooklyn residents at 4404 6th Avenue.

Beginning around 1915, Fisher was staff cartoonist on Moving Picture World magazine. Some of his cartoons are here, here, here and here. His photograph appeared in the March 31, 1917 issue, right-hand page, lower right-hand corner. 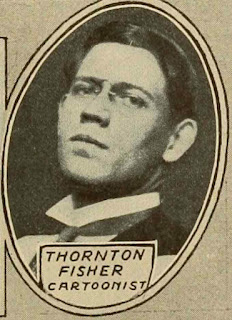 On September 14, 1916, Fisher and his wife returned from Bermuda. The passenger list said their address was 2205 Foster Avenue in Brooklyn.

Fisher signed his World War I draft card on June 5, 1917. His Brooklyn address was 2104 Albemarle Terrace. His employer was the McClure Newspaper Syndicate. Fisher’s description was tall and thin with blue eyes and dark brown hair.

For the Boston Globe, Fisher drew Dippie Ditties from January 13 to March 24, 1918. The words and music were by Byron Gay. Also in 1918, Fisher illustrated Ellis Parker Butler’s parody of Sherlock Holmes.

WNYC said Fisher began his radio broadcasting career “in 1923 at AT&T’s WEAF in New York as one of radio's earliest sports commentators. He switched to WNYC the following year, not long after the municipal station began broadcasting. ”

Fisher wrote about being a broadcaster in Radio News, October 1923.


Last summer [1923] he gave up newspaper work to organize a syndicate to handle his own drawings. In September be began broadcasting for the United Cigar Stores Company of America. This led to his appointment as editor in chief of the company’s sport magazine.


Also in 1923 was the establishment of the Thornton Fisher School of Cartooning. It continued into 1924.


Broadcasting five nights a week, as be does, has broken up his home life, since it is at least nine o’clock when he gets to his home. It is a sacrifice that few would care to undertake. It has its compensations, however, he believes. Thousands of letters of commendation reach him weekly, with an occasional one from a disgruntled radio fan who bemoans the lack of more information on his particular brand of sport. Others ask questions. “Life, it seems to me,” he said with a grin, “is just one questionnaire after another, but I like it.” Interest in amateur sports keeps him at it.

Mr. Fisher never loses an opportunity to get into games himself. Golf claims all his spare time and he manages to “walk around” eighteen holes in about ninety-four or ninety-five, a respectable score for a man with so few opportunities to play the royal game.

Boxing, however, is the greatest thriller to watch, he believes, and wherever there is a match of any importance at all he is sure to be somewhere around.

Next to sport, his greatest interest is centered in Flushing, where he has his own home. His family consists of a wife and daughter, the latter a freshman in high school. An adopted member is the bull pup.

Prior to his sentence to broadcasting the cartoonist found time to visit the many clubs in which he is enrolled. These include the Society of Illustrators, of which Charles Dana Gibson is honorary president; the Dutch Treat, Shelter Rock Country Club at Great Neck, the Newspaper Club, the New York Athletic Club and others, as well as prominent fraternal societies.


On July 2, 1924, Fisher received his passport. The application listed England, France and Italy as destinations. His address was North 29th and Crocheron Avenue in Flushing, New York. When his passport was extended it had a different address, 594 East 22nd Street, Brooklyn.

Fisher and family returned from their European vacation May 7, 1926. They had sailed from Le Havre, France on April 28. Their home was at 594 East 22nd Street, Brooklyn.

The Boston Globe, May 23, 1926, published Fisher’s visit to Morocco. The article was illustrated with his photographs and drawings.

The writer-artist said he was hired on a year’s contract at $7,500 a year by the New York Evening Graphic in September, 1924. After working six weeks, he charges, he was discharged without sufficient cause.

The amount involved in the suit is $6,750, the difference between the six weeks salary Fisher received and the amount called for in the contract.

Vincent Treanor, sporting editor of the Evening World, and other well-known figures in newspaper circles, were called as witnesses.

The case was resumed this morning before Justice Lewis E. Fawcett and a verdict is expected today.

In 1929 Fisher was listed in the District of Columbia city directory. The cartoonist’s address was 2900 Connecticut Avenue NW, apartment 443.

According to the 1930 census, Fisher and wife were living apart. She was in Brooklyn with her parents, while he remained in DC at the same address. At some point they divorced.

For the Chicago Daily News, Fisher described some of Jack Dempsey’s boxing matches which were illustrated with frames from the films. The match with Gene Tunney was published June 13, 1936.

The first nine frames of 29 in part one.


Divorced Wife Asks Decree Be Voided
Supreme Court Justice Thomas C. Kadlen has reversed decision on a motion made by Thornton Fisher, radio commentator, of Forest Hills Inn, to dismiss the complaint in an action brought by his first wife, Mrs. Ruth H. Fisher of Manhattan. She seeks a declaratory judgment that she is still his wife and would set aside a Mexican degree of divorce he obtained in 1932.

Fisher married the plaintiff in 1908. A year after the divorce Fisher remarried. His present wife is the former Laura Haugaard.