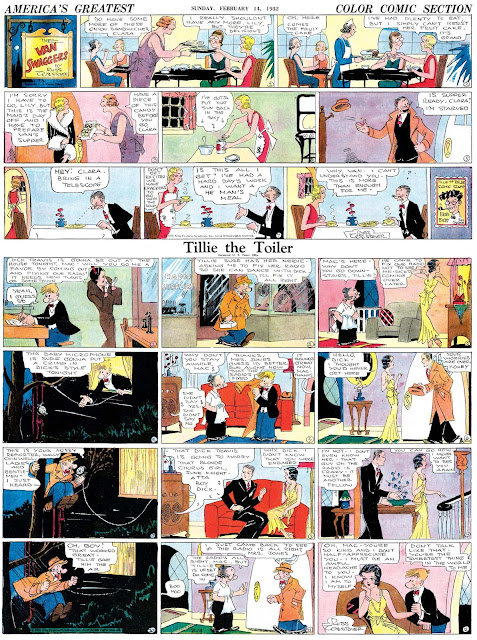 Russ Westover's Tillie the Toiler, which debuted in 1921, enjoyed an astonishing popularity. Westover's art always looked rushed, the gags were repetitive and the title character had few redeeming qualities, yet this early entry in the working girl genre ran in a large number of papers right up through Westover's retirement from the strip in 1952 and beyond.

A Sunday page was added to the strip in 1922, and then in 1926, when all the Hearst Sundays gained toppers, Westover floundered about with a few different ideas. Finally he settled on a husband-and-wife sitcom starting on May 9 1926. The strip tried to be at least a little original by doubling the cast, having two married couples share the stage with the men being brothers. The comedy generally stemmed from the two fellows getting along much better than the wives. The strip was originally titled The Van Zippers, but on August 22 it was changed to The Van Swaggers with no fanfare or explanation.

As time went on one couple gradually left the limelight, leaving Clara and Tom Van Swagger* to make comedy on their own. The frumpy Clara was given a makeover into a willowy blonde beauty in the first few months of 1927, and Westover flirted for awhile with adding continuity to the strip. It wasn't long, though, before the strip settled down into a humdrum bickering husband-and-wife strip with about as much life to it as broiled halibut.

I guess Westover finally couldn't stand to recycle another limp gag for the couple because in 1938 he introduced Aunt Min, a powerfully built headstrong old maid, and in short order renamed the strip The Van Swaggers Starring Aunt Min starting July 3 1938. Despite still getting title billing, Clara and Tom were effectively evicted from the strip. Finally on May 16 1943, after half a decade lost in action, the Van Swaggers were retired from their title, making it simply Aunt Min.

Min wouldn't have the pleasure of the new name for long though, because the powers that be decreed that Tillie the Toiler's Sundays be reduced from full page to a half as the maximum size, and that left no room for her. Aunt Min's last Sunday topper appearance was on January 2 1944**.


* later the husband would be referred to as Van as if it wasn't part of the surname
** Source: Lincoln Star