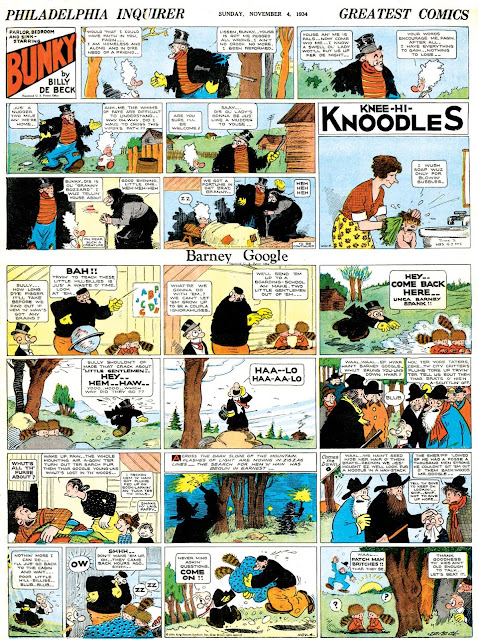 One of these days we'll discuss the classic and much in need of reprinting Barney Google topper Bunky, but today we're going to settle for a forgotten secondary topper, Knee-Hi-Knoodles.

In the mid-1930s King Features started strongarming cartoonists to supply not just one but two toppers for each Sunday strip, all the better to shore up the front page headline that "The Sunday Gawker has 99,999 Comics!" Billy DeBeck responded with an oft-changing set of panel cartoon series. Knee-Hi-Knoodles offered up wacky wisdom from the mouths of children when it began on September 9 1934. Eventually, though, DeBeck found the restriction to kids more than he wanted to deal with, and on March 24 1935 the title was changed to DeBeck's Knoodles, so that the gag lines could be an all-ages sport.

The feature was dropped after the installment of June 23 1935, and DeBeck produced only a single topper, Bunky, for the next few months, flouting King Features' directive.

Comments:
I believe that though all the KFS top strips started having a one panel gag included in late '34, most of them vanished after a while, and most of them had several titles. Though most were gags, Some of these panels featured cut out dolls, or cut-out movie strips, or even Knerr's jigsaw puzzles. Segar invited kids to send in their own art, in "Popeye's Cartoon Club".
My impression was that though they might be technically counted as another feature,they impressed few editors or readers. Some cartoonists really enjoyed doing them, like Jimmy Murphy, who had earlier devised the "comic Stamp" and "Play Money" features that many of the other KFS strips had for a little while. His cutout dolls were apparently very popular, and other cartoonists with girl leads in their strips followed suit, even over in other syndicates.
But you will notice that the extra panel idea was dropped by most of the KFS series by the begining of WWII. The most important of the panels was Chic Young's, which was a nondescript thing called "Sideshow", which he replaced with "Colonel Potterby & the Duchess" in early 1935, which expanded to become the top comic after only a few weeks, when "The Family Foursome" was retired. The Colonel and the Duchess went on to become the last of the top comics, lasting until the Autumn of 1963.