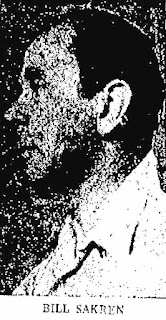 William “Bill” Sakren was born on September 15, 1902, in Russia, according to his World War II draft card at Ancestry.com. In the 1910 U.S. Federal Census, Sakren was the oldest of four children born to Benjamin and Fanny. The census said Sakren’s father, a brass finisher of gas lights, emigrated in 1906. The rest of the family followed in 1907 except for the youngest child who was born in New York. The Sakrens lived in Brooklyn at 2018 Bergen Street.

According to a 1954 passenger list, Sakren became a naturalized citizen in May 1914 in New York City.

The Morning Herald (Hagerstown, Maryland), November 11, 1959, said Sakren was “a graduate of Pratt Institute in New York and the Julian and Collarassie Academies in Paris.”

In the 1925 New York state census Sakren, an artist, continued to live with his parents whose address was 180 Lott Street in Brooklyn. Sometime after the census Sakren went to Paris to continue his art studies.

A 1927 issue of Town & Country mentioned an “exhibition of paintings by William Sakren, February 23–March 7.” On November 15, 1927 he returned aboard the S.S. Olympic to New York City. While in Paris he met aspiring artist Roy R. Neuberger. Neuberger became a financier and collected art including work by Sakren which was catalogued in The Neuberger Collection: An American Collection; Paintings, Drawings, and Sculpture (1968).


William Sakren
An acquaintance whom Mr. Neuberger met in Paris in 1927, Sakren is a commercial artist who has created the cartoon character Mortimer Mudd. He presently lives in Connecticut.


Sakren was not yet been found in the 1930 census.


A cartoonist and a newspaper publisher were among the passengers aboard the S.S. Atlantida of the Standard Fruit company which docked at the Desire street wharf this morning. Will Sakren of New York City is the creator of mortimer Mum, a syndicated feature. he plans to stay at the Monteleone hotel. …


Sakren traveled to Europe again. He returned from Le Havre, France and arrived in New York City on September 25, 1937.

On February 27, 1940 Sakren departed Puerto Barrios, Guatemala. His ship the S.S. Carrillo arrived in Philadelphia on March 4. He returned in time for the 1940 census enumeration. Sakren’s residence was 404 East 55th Street in Manhattan, New York City; the address was the same in 1935. He was a self-employed artist.

Sakren signed his World War II draft card on February 16, 1942. The address and occupation were the same. His description was five feet four inches, 150 pounds with brown eyes and black hair.

Sakren passed away November 13, 1991, in Kent, Connecticut, according to the Connecticut Death Index at Ancestry.com.