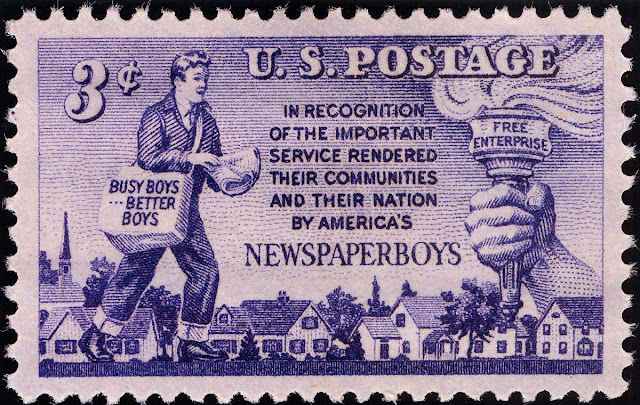 
Philadelphia, October 6 1952 (AP) -- The nation's great paused yesterday to pay tribute to the boy next door -- the one who delivers your newspaper.

The youthful champions of free enterprise got special recognition yesterday when the U.S. Post Office placed on sale a three-cent stamp honoring their service to community and country.

The stamp will be sold exclusively in Philadelphia for a short time and then will be placed on sale throughout the nation. It depicts a newspaperboy carrying papers in an average American community. On the boy's bag is the legend, "Busy Boys . . . Better Boys."The stamp, printed in three shades of purple, was adapted from a sketch made by the Philadelphia Evening Bulletin's editorial cartoonist, F.O. Alexander.

The paper carriers were honored by the Bulletin at a banquet Friday attended by such prominent former newspaperboys as Secretary of the Treasury John W. Snyder, Harold Stassen, president of the University of Pennsylvania, former U.S. Senator Francis J. Myers and Horace A. Hildreth, president of Bucknell University and former governor of Maine.

Similar ceremonies were held throughout the country in conjunction with National Newspaper Week.

This post was possible courtesy of Mark and Cole Johnson, who sent me the newspaper clipping (from the Glens Falls Post-Star) along with the following promo photo of Alexander. Cole wrote the following on the back of the photo:

"F.O. Alexander in his office at the Philadelphia Evening Bulletin on May 28 1965.

Alex strikes a pose with an unlit pipe at his drawing board. Out the window can be seen the northern end of the platforms at 30th Street Station.

He gave me this original in about 1980, I have no idea where or if it was published. He passed away in 1993. He told me he lost his hair in a mustard gas attack in frontline combat in WWI. Pictures of him in the 1920s would bear that out." Comments:
Hello Allan-
Actually, It were I who wrote the description of the photograph. I put in a lot of hours at the Philadelphia library tracking down (based on the edition of the Bulletin in the foreground and the cartoon he is pretending to work on) the exact date of the picture. It was great to have lots of time and energy to spend on such things.
Still have yet to find any ultimate purpose for the photo's creation, it occurs to me he had it commissioned for his own use, if there were autograph fans, or something. The rough, unmatted edges, and the sharp quality tell me this is the photographer's proof, the last copy of the picture in his possession. It's now framed, on my hallway wall, next to a picture, undoubtably the final time ever, that he drew of Hairbreadth Harry, Rudolph and Belinda.
You will remember on New Year's day 2019 the Stripper's Guide entry about the Evening Bulletin souvenir booklet? Well, Alex's office was on the side of the building, looking across to the train station.