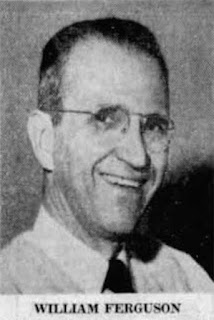 William Henry Ferguson was born on May 8, 1900, in McPherson, Kansas, according to his World War II draft card which had his full name. His parents were George P. Ferguson and Gillie A. Pendleton who married on October 27, 1881 in Bedford County, Virginia.

In the 1900 U.S. Federal Census month-old Ferguson was the youngest of five siblings. The family resided in Groveland, Kansas. Ferguson worked on the family farm for about 18 years.

Ferguson signed his World War I draft card on September 12, 1918. He was a student whose address was 521 South Main Street in McPherson, Kansas.

The 1920 census was enumerated in mid-January. It recorded unemployed Ferguson, his parents and two brothers in Groveland. Not long after the census Ferguson had a cartooning job. The McPherson Daily Republican, June 16, 1920, said


Drovers Telegram was in Kansas City, Missouri. The Printers’ Ink, December 30, 1920, printed a two-page advertisement for the Corn Belt Farm Dailies that featured Ferguson’s Beekins. Information about Ferguson’s art training has not been found. 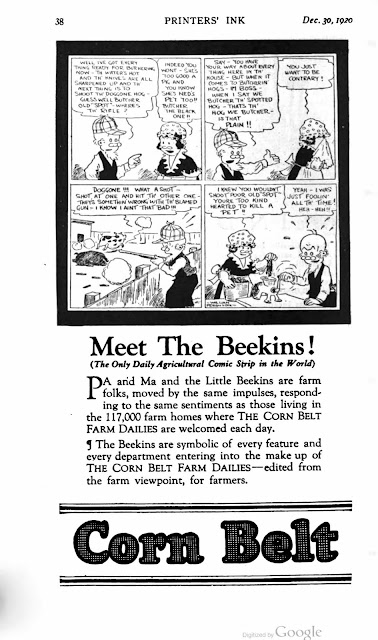 Ferguson’s cartoons were reprinted in 1921 issues of The Cattleman here and here four times.

In 1924 University of Wisconsin–Madison student, Maynard Wilson Brown, wrote his thesis, The New Agricultural Journalism. A chapter focused on cartoons and he wrote


William Ferguson in the Chicago Daily Drovers’ Journal has also done some excellent work in cartooning. His cartoons invariably show a very pleasing sympathy with the farmers’ problems and he has the happy faculty of not cluttering up the main issue with too many ideas and an overabundance of composition. He as a rule works out one idea only in each cartoon.

The attendants were Raymond S. Clark of McPherson and Glessuer Wright of Colorado Springs, Colo.

Mr. Ferguson and his bride, following a month’s honeymoon in Colorado, will be at home at 5907 Mason street after September 1. Mr. Ferguson is the cartoonist for Corn Belt Farm Dallies of which the Omaha Journal Stockman is a member.

In the 1930 census newspaper artist Ferguson was an Omaha resident at 5907 Mason Street. The address was the same in the 1940 census which said he had four years of high school and earned $5,000 in 1939. His daughter, Mary, was six years old.

On February 12, 1942, Ferguson signed his World War II draft card. He lived at the same place and was employed at the Journal Stockman. His description was five feet ten inches, 165 pounds, with gray eyes and black hair.


Creator of this adventure story with a nature background is William Ferguson. Cartoonist Ferguson was born in 1900 and spent his first 18 years on a Kansas farm. It was during those years that he found and developed his interest in the observation of nature’s way.

He began doing nature drawings for a national syndicate in 1927. These educational cartoons soon became widely circulated in newspapers throughout the United States and Canada under the title, “This Curious World.”

Ferguson’s combined interest in natural history and photography resulted in making thousands of feet of color movies of wildlife subjects, and since 1947 he has traveled from six to 19 weeks each winter under the auspices of the National Audubon society, showing films to wildlife and nature audiences throughout North America.

Ferguson is married and has a daughter, Mary, a student at Carleton college in Northfield, Minn. He lives in Omaha during the winter months, but with the coming of spring he strikes our for Colorado, where he and his family make their home in a studio 8500 feet above sea level in the magnificent area bordering on Rocky Mountain national park.

The hero of the “Glen Forrest” strip is no superman, but just a normal young fellow with a few years of army service and a college course behind him. He has an inherent love of the out-of-doors, furthered by a major in biology.


Omaha, Neb.—William H. Ferguson, 86, Omaha, died Monday, June 23, at the Methodist Hospital, Omaha. Mr. Ferguson was born May 8, 1900, in McPherson. For 50 years he had written a comic strip called Beekins for Drover’s Journal of Omaha.

Survivors include his wife, Evelyn of the home. A service will be at 1 p.m. Friday in the McPherson Cemetery, the Rev. Lawrence Clark officiating. Memorials may be made to the Dundee Presbyterian Church of Omaha or the Community Church of the Rockies, Estes Park, Colo. Glidden Funeral Home of McPherson is in charge.


Ferguson was laid to rest at McPherson Cemetery.