Granville E. Dickey was born on June 24, 1902, in Washington, District of Columbia (DC), according to his World War II draft card. In the 1910 U.S. Federal Census, Dickey was the oldest of two children born to Raymond and Rose. The family and two servants resided in DC at 1358 Otis Place. Dickey’s father was an attorney. At age six Dickey was hit by a truck as reported in the Evening Star, February 13, 1909. Dickey attended Central High School where he excelled in swimming the backstroke.

The Dickey family continued to be DC residents, at 1702 Kilbourne Place NW, in the 1920 census. In 1924 Dickey graduated from the College of Journalism of Northwestern University in Chicago. He was a member of the varsity swimming team, and in his senior year was named a member of the all-American swimming team. 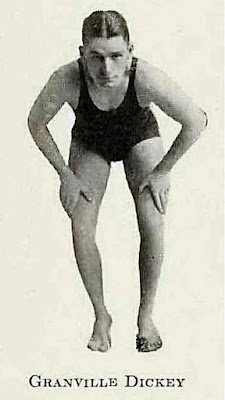 American Newspaper Comics (2012) said Dickey was the first writer of Men Who Made the World, which was drawn by Chester Sullivan. The strip started on September 21, 1925 and after five dailies Dickey’s name was replaced by “Dr. Elliott Shoring, Noted Eminent Historian”. Records of this person have not been found. Shoring may have been a pen name. The John F. Dille Company series ran for many years as reprints.


The marriage of a former Washingtonian, Mr. Granville E. Dickey, to Miss La Verne Carnes will take place this afternoon in Chicago, the home of the parents of the bride. After an extensive trip to Cuba and Spanish Honduras, they will return to Chicago, where Mr. Dickey is advertising manager for a large wholesale house.

He is the son of Mr. and Mrs. R.B. Dickey of 1702 Kilbourne place. In 1920, when he graduated from Central High School, he was captain of the swimming team and a captain in the Cadet Corps.


According to the 1930 census, the couple resided in Oak Park, Illinois at 402 South Cuyler Avenue. Dickey was an advertising copywriter.

At some point Dickey moved. The Official Register of the United States 1938 listed Dickey as a statistician in DC. On November 25, 1941 Dickey testified before the House of Representatives’ committee hearings on the conservation of wildlife.

On February 14, 1942, Dickey signed his World War II draft card. He lived in Silver Spring, Maryland at 8003 Eastern Avenue, apartment 104. Dickey was employed at the U.S. Conservation Corps in DC. His description was five feet eight-and-a-half inches, 145 pounds, with brown eyes and hair. Dickey had divorced in 1941.


He was laid to rest at Cedar Hill Cemetery.

Comments:
Granville Dickey's daughter Rosemary was my mother-in-law (she passed in 2016, age 85). When I first started dating her daughter, I was an avid comic book collector. Rosemary often talked about how her dad taught her to read by reading the newspaper. However, she was forbidden to read the funny pages, because they would rot your brain, her dad told her. So she'd tease me about my comic books. Several years after I married into the family, I learned of the existence of Men Who Made The World. Rosemary was completely unaware of the strip's existence. I tend to think that Shoring probably was Granville's pen name, because he clearly was embarrassed by any association with comics, and didn't want his daughter to know he'd written the strip.

Thanks for this writeup.