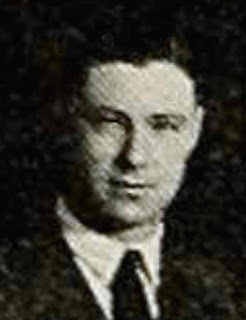 (The following profile is based on finding only one artist named Chester Sullivan. An article identifying him as the artist of Men Who Made the World was not found.)

Chester Milo Sullivan was born on March 12, 1898, in Minneapolis, Minnesota, according to his birth certificate at Ancestry.com. His parents were Frank and Margrethe. Sullivan’s middle name was on his World War II draft card.

In the 1900 U.S. Federal Census Sullivan was the youngest of four siblings. His family resided in Minneapolis at 759 Washington Street NE. Sullivan’s father was a post office clerk. The family’s address was the same in the 1910 census.

Information about Sullivan’s art training has not been found.

During World War I Sullivan enlisted in the Marine Corps on July 3, 1918. He was a gunnery sergeant stationed with the Central Reserve Division.

According to the 1920 census, Sullivan’s mother, a widow, was the head of the household. They lived at the same address. Sullivan was unemployed.

Sullivan continued his education at the University of Minnesota. He was a member of the fraternity, Delta Tau Delta, and the Aero Club.

Minneapolis city directories from 1922 to 1928 listed Sullivan as a commercial artist and his home address.

American Newspaper Comics (2012) said Sullivan was the first artist on the series, Men Who Made the World, which ran from September 21, 1925 to April 16, 1927. The following artists were not credited. Writer Granville E. Dickey was replaced by Dr. Elliott Shoring who may or may not exist. John F. Dille Company was the syndicate.

On February 16, 1942 Sullivan signed his World War II draft card. His home and studio was at 3517 West 28th Street in Minneapolis. He was described as five feet eight inches, 150 pounds with gray eyes and brown hair. He enlisted in the Army on on June 24, 1942. His rank was first lieutenant.


Acutely conscious of certain trends, 1st Lt. Robert North of Alhambra, Calif., decided that something drastic should be done to offset the inroads made in the Pacific by that amiable, sprawling outfit labeled the Short Snorters.

He conferred with M.Sgt Norman Hoch, a citizen in good standing of Oklahoma City, and they decided that there was a crying need for some sort of exclusive organization in the South Seas, where all sorts of improbable things happen. The Short Snorters, they opined, was getting pretty loose. It used to be limited to those persons who had flown over a body of water, but now it could happen to anybody, like Athlete’s Foot, or rundown heels.

So they founded the Tarawa Cricket Club, and might have run something up a pole to commemorate the occasion, but poles are scarce in that country. Instead, they enlisted the aid of Maj Peter S. Paine of New York City, and Maj Chester M. Sullivan, of Minneapolis, Minn., to help them get under way.

In case you've wondered, the name comes from the fact that there are a lot of idle cricket fields laid out on the islands. The English used to play the game there before the war, but have given it up for more strenuous activities.

Maj Sullivan designed a stamp, and unless you’ve had some business in the Pacific war you won’t ever get any closer to it than you are right now. That’s how the thing was made exclusive. Stamps are being distributed to other points—there will be a Kwajalein Chapter, Saipan, Guam, perhaps a Truk Chapter, a Philippines, and no doubt a Tokyo Chapter under the parent Tarawa nucleus.

The stamps will be held on each island by some responsible officer, probably the S-2, and if you care to join, look him up and he’ll stamp a replica of the informal coat of arms on your stationery, birth certificate, a pair of souvenir panties, or anything else that will take the ink. It costs you a dollar, which is used to buy more stamps for other chapters.

It was felt that the club would promote a certain comraderie [sic] among the men, for it is a thing that is really exclusive. No outsiders can join—you absolutely have to be on the island before you can join.

You can have a bill stamped and dash around collecting signatures if you like, but the originators look down their noses frostily on the practice.

The club is open to everyone from Dogfaces up, and there’s some highpowered company in it. Even generals—especially generals—are potential members, and some belong now. Maj Gen Willis H. Hale belongs, and plugs the club for a commendable venture, according to Lt North.

Membership won’t make you any money or when you get back home (wars always HAVE cure very many of the ills man is heir to, but ended) you’ll have something as exclusively South Seas as atoll-fishing.


Sullivan’s veteran’s file said he was a lieutenant colonel at his discharge on September 9, 1944. Presumably Sullivan resumed his advertising career in Minneapolis.

Sullivan passed away on February 10, 1973, in Minneapolis. He was laid to rest at the Fort Snelling National Cemetery.