The July 1918 strips are a good example of what I would have been for a long while calling the work of Outcault with an occasional minor assist from Ross. But is Ross getting better at aping Outcault's style? On the 7th we see a signature Ross pose in story panel 11, and on the 28th Tige adopts a Ross pose twice (panels 4 and 8). I find it hard to believe that this was the sum total of Ross' involvement, so I'm guessing that he's getting better able to throw us curveballs that look more like Outcault. If he's learned to draw Tige in Outcault's distinctive manner, I'm really losing an important element of my meager art-spotting toolkit.

On August 4 we get a page that seems to put my worries to rest. This is obviously mostly Ross work. Is it possible that Buster, Tige and Mary Jane are now being drawn by Ross but close enough to the Outcault standard that I fail to tell the difference? Sometimes Ross definitely still misses on these characters, but is that a true tell anymore, or a momentary lapse?


After August 4th, we are back to what looks more like Outcault to me, but who's to say. The drawing is certainly less fussy than what Outcault used to produce, but it still has many of his distintive poses and stylistic flourishes with little in the way of obvious Ross-isms.

On the August 18 strip we get an enigmatic signature line, "I think this is pretty good,", along with a rather shaky Outcault signature. What does it mean? Is he complimenting Ross on a good ghosting job, or is he merely patting himself on the back for a good strip?

On a different note, I think the strip of the 11th is a real hoot.


On September 1 we get a masthead that looks like vintage Outcault, over an at best indifferently drawn strip that has some telltale Ross-isms on Buster's face (one thing I look for is cheek pouches these days, as they are not something I associate with Outcault). If I had to make a bet, I'd say this masthead has been reused from an old strip.

The last four panels of the September 22 strip are definitely Ross, the rest of the strip it's harder to tell.


And finally on September 29, I'm calling this Ross in his 'deadline doom' mode. Buster's face is badly drawn, Tige is off-model, but Ross always has time for those frilly dresses.

Comments:
Hey! This doesn't have anything to do with Buster Brown, but it does relate to some older posts on this blog and I wasn't sure if you would see the comment there.
I noticed several posts about Fay King while reading through the archives of this blog, and her bio mentioned that after February 1954, when she paid for "Bat" Nelson's funeral, her whereabouts were unknown. Someone on another comic strip forum found the following passenger list from a few months later, which shows her leaving for England: https://i.imgur.com/dsdkfom.jpg
I just thought you might find this interesting, since it gives more of an idea of what happened to King after her cartooning career ended.

We start April 1918 with some definite Ross involvement, looks to me like Ross handled most everything except for Buster and Tige in this one.

April 14 at first blush looks to be a very fine example of Outcault, including some great dialog, but I see Ross' hand on Mary Jane in story panel 7, and the dentist also comes across as a Ross-y kinda guy. Great strip, tho.


Another good strip on the 21st is marred by indifferent art. Looks mostly like Outcault to me, but it is so slapdash I can't really tell. Did photographers really need to put their subjects on those head positioners as late as 1918? I'm thinking that went out with the horse and buggy.

I'm guessing April 28 is all Outcault, but again the art is pretty unadorned.

All the May strips look to me like all or mostly Outcault episodes. A real mix though, with some really fine Outcault work on many pages mixed in with barely journeyman stuff.


On June 2 it looks to me like Outcault did the first tier or so and then gradually relinquished the work to Ross. The gag of having Tige in a celluloid collar and tie goes precisely nowhere.

On June 9 I'm guessing the lion's share of the page is by Ross, and he seems pretty rushed. Tige and Buster both go off-model several times.


The style is all Ross on June 16, but the execution is pretty darn awful. Did neither cartoonist give a darn about these strips anymore?

Almost as bad is the 23rd, another seemingly all-Ross page.


And finally on the 30th it looks like Outcault stepped in to do the Tige figures maybe, but once again mostly Ross in deadline mode.

Comments:
Re the head brace for photography: this site says the braces were used "well into the 20th century," so they were likely in use as of 1918. http://thephotopalace.blogspot.com/p/head-brace.html 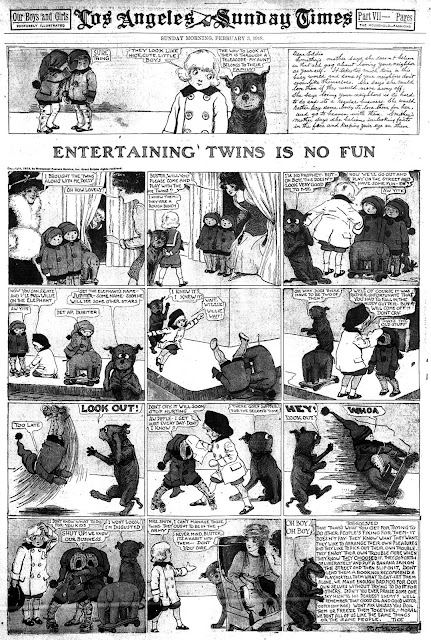